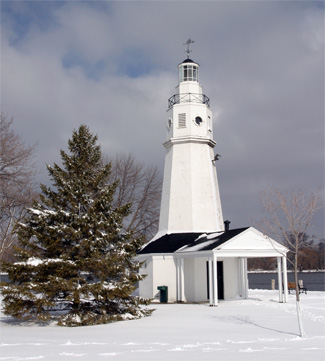 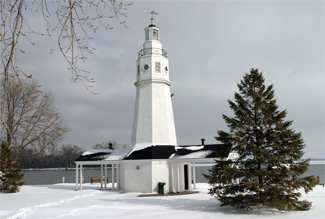 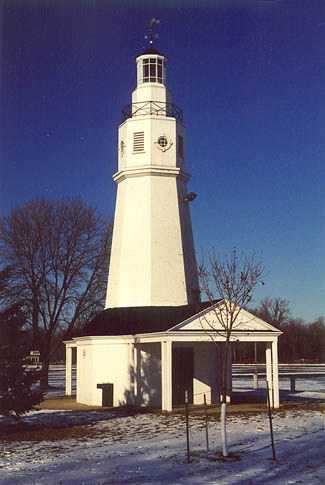 In 1872, John Alfred Kimberly was one of four men who founded Kimberly, Clark and Company at Neenah, Wisconsin. The company began as a paper company, but later developed personal products that today account for the majority of its income. The success of the company permitted the Kimberly family to make significant contributions to the City of Neenah.

Helen Kimberly Stuart, daughter of John A. Kimberly, donated land overlooking the confluence of the Fox River and Lake Winnebago to the citys park system in 1929. A decade later, the Kimberly family offered to erect a functional lighthouse on the land, then known as Kimberly Point Park, but the outbreak of World Ward II interrupted these plans. In 1944, Helens brother, James Cheney Kimberly, donated funds for the lighthouse, and Flour Brothers Construction Company of Oshkosh constructed the present structure the following year. The tower, which includes a comfort station in its base, was built of brick and Haydite block and cost $7,500. When first built the tower stood forty feet tall, but it was raised to a height of forty-nine feet in 1954. Today, the top of the tower is topped by a weathervane in the shape of a sailboat.

The lighthouse on Kimberly Point isn't the first beacon to have marked the waters near the northern end of Lake Winnebago. In 1852, an island known as Lighthouse Reef was selected as the site for a lighthouse to mark the entrance to the Fox River from the lake. Known as Menasha Lighthouse, this beacon was placed in operation in 1855 with Dennis Crowley as its first keeper. The expected boat traffic on the Fox River never materialized, and the light was discontinued in August 1859. The lighthouse was locked up, and the key was placed in the hands of the customs collector at Green Bay. The abandoned and looted structure burned to the ground in 1880.

Located in Kimberly Point Park on the south side of the entrance to Fox River from Lake Winnebago.
Latitude: 44.1853, Longitude: -88.4425

For a larger map of Neenah (Kimberly Point) Lighthouse, click the lighthouse in the above map.

From Highway 41 west of Neenah, take Exit 131 and follow Highway 114 east into the city. After 1.6 miles, turn right onto E. Wisconsin Avenue. After 0.9 miles, where Wisconsin Avenue ends at the lake, turn left on Lakeshore Avenue, which will lead to the park and the lighthouse.

The lighthouse is owned by the City of Neenah. Grounds open, tower closed.