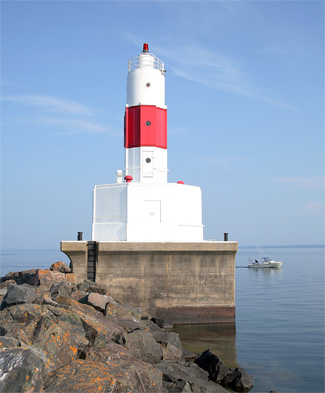 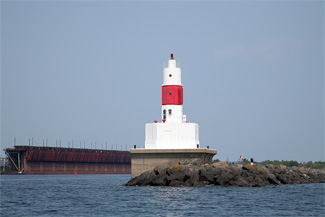 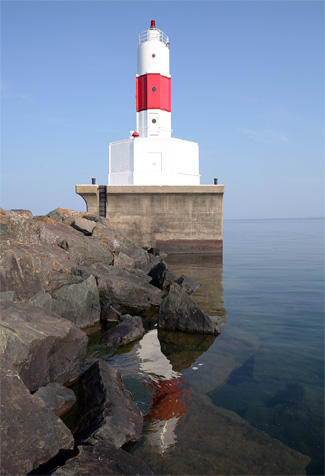 Presque Isle Harbor, also known as Marquette Bay or the Upper Harbor, is protected from northerly storms by Presque Isle. The term Presque Isle is French for almost an island and is applied to a number of land masses on the Great Lakes that are attached to the mainland by a narrow neck of land. Other places named Presque Isle are found just north of Alpena on Lake Huron, at Erie, Pennsylvania on Lake Erie, and near Brighton, Ontario on Lake Ontario. Between 1897 and 1902, a 1,216-foot breakwater was extended from the southern point of Marquettes Presque Isle in a southeasterly direction, and the present ore dock was completed in 1912 by the Lake Superior and Ishpeming Railway. Built of steel-reinforced concrete, this dock is 1,250 feet long, 75 feet tall above water level, 60 feet wide, and replaced a wooden ore dock that had been damaged by storms. The dock has 200 ore pockets and a storage capacity of 50,000 tons.

After being mined, ore is crushed, and the iron found therein is extracted by either a chemical or magnetic process. The iron is then mixed with a binding agent and rolled into small balls that are fired in a kiln. Known as taconite pellets, these balls are shipped by rail to the ore dock where the railcars deposit them into bins within the dock. Once a freighter is ready to be loaded, chutes from the ore dock bins are lowered into the cargo hatches, and a door at the bottom of the bin is raised, permitting the pellets to roll into the ship. Loading takes approximately four hours. Most of the ore from Presque Isle Harbor comes from Marquette Iron Range and is transported to Algoma Steel in Sault Ste. Marie, Ontario, where it is mixed with coke and limestone to make steel.

In 1938, the Lighthouse Service announced a project for placing an unattended light at the end of the planned extension of the breakwater at Presque Isle Harbor. In addition to the light, a new keepers dwelling and boathouse were to be built at Marquette. A contract for extending the breakwater 1,600 feet and building the lighthouse was awarded to Polaris Concrete Products Company of Duluth, who had the low bid of $596,000.

The following excerpt from the Annual Report of the Lake Carriers Association for 1940 describes the navigational aids soon to be placed at the end of the recently extended breakwater:

In 1941 a new light, fog signal and marker radiobeacon will be established on an inclosed steel tower at the outer end of the new Presque Isle Harbor Breakwater. The light will be flashing red of 3,000 candlepower. The fog signal will be an air diaphone sounding a double blast every 20 seconds.

The marker radiobeacon will operated on a frequency of 310 kc. With a continuously repeated characteristic of five 12-second dashes followed by 10 seconds of silence.

The station was operated by remote control from a distance of two miles, which is exactly how far the breakwater lighthouse is from Marquette Harbor Lighthouse. The lighthouse consists of a thirty-two-foot-square concrete pier, an octagonal concrete first story, and a three-story steel light tower topped by a cupola and marked with a bright red band . The first story houses three rooms and was originally home to equipment that included compressors, fuel tanks, and compressed air storage tanks. A series of vertical ships ladders lead from the first story up through the steel tower.

Presque Isle Harbor Breakwater Lighthouse was added to the National Register of Historic Places in 2016. The nomination form noted that Presque Isle Harbor is the ninth busiest port on the Great Lakes and is home to Michigans last operating iron ore pocket dock, which is responsible for shipping around nine million tons of taconite pellets each year. The form also included the following justification for placing the light on the National Register:

The Presque Isle Harbor Breakwater Light is also significant under Criterion C as a representative of second-quarter twentieth century lighthouse architecture and engineering. It exemplifies characteristics of design, construction methods, and materials used in building concrete and steel superstructure lighthouses during that time period. These design and construction aspects proved to be well-suited for marking piers and breakwaters in the Great Lakes. The Presque Isle Harbor Breakwater Light's existing integrity attests to the lasting value of its design, as well as the high quality of its materials and construction. Its structure remains essentially unchanged from when it was originally built.

Presque Isle Harbor Breakwater Lighthouses flashing red light has a focal plane of fifty-six feet, and in 2016, its fog signal, which gives a double blast every thirty seconds, could be activated by keying ones microphone five times on VHF-FM Channel 83A.

For a larger map of Presque Isle Harbor Breakwater Lighthouse, click the lighthouse in the above map.

To reach Presque Isle Park from Marquette Harbor Lighthouse, continue north on Lakeshore Boulevard for 2.8 miles. The road will become Peter White Drive as you enter the park, and the foot of the breakwater will be on your right.

The tower is owned by the Coast Guard. Grounds open, tower closed.


A monument near the breakwater carries the following message:

The awesome beauty of Lake Superiors waves have their dark and tragic side. The tremendous force of the waves and the frigid water can overpower even the strongest swimmers.

DO NOT WALK ON THE BREAKWALL WHEN WAVES ARE HIGH

Forever young Forever in our hearts

Shane Kulchyski was hit by a wave and swept off the breakwall during high waves on October 4, 1988. Kurt Buffington attempted to rescue him. They drowned in turbulent waters next to the breakwall. Both young men were freshmen at Northern Michigan University. This memorial and warning was donated by the students of Northern Michigan University, the families, and friends of Kurt and Shane as a warning to others. May whoever is drawn to the breakwall when waves are high heed the warning so that no other lives will be lost.