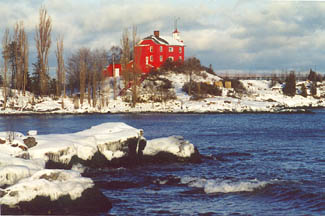 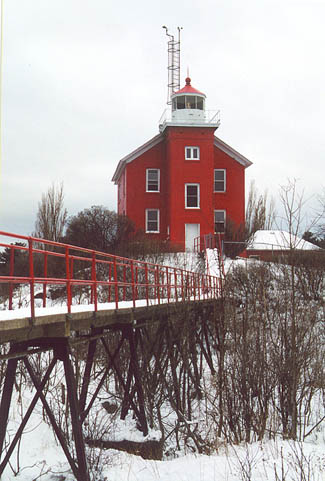 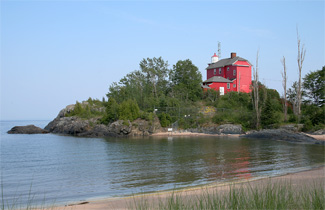 The discovery of iron deposits at Teal Lake, just west of Marquette, in 1844, led to the development of the area. The village of New Worcester was established in 1849 to support the mining operations, and the following year the name of the village was changed to Marquette to honor Jacques Marquette, the French Jesuit missionary who had explored the region. The early importance of the harbor at Marquette is evidenced by the fact that it was marked by one of just a handful of lighthouses built on Lake Superior before the opening of the Soo Locks in 1855. Congress provided $5,000 for the lighthouse on September 28, 1850, and all but $25 of this sum was spent in its construction. The first lighthouse at Marquette was established on the point just north of the harbor in 1853 and consisted of a stone tower that stood twenty-six feet, eight inches tall and tapered from a diameter of ten feet, six inches at its base to six feet, five inches at its octagonal lantern room. A one-and-a-half-story stone dwelling was located nearby for the keeper, and Harvey Moore was hired as the lights first keeper at an annual salary of $350. A sixth-order Fresnel lens was installed in the towers lantern room in 1856, in place of an array of lamps and reflector, and it produced a fixed white light at a focal plane of seventy feet above Lake Superior.

Nelson Truckey was hired as keeper of the lighthouse in 1861, but he went off to fight in the Civil War the following year, leaving his wife Anastasia to operate the lighthouse. Besides minding the light, Anastasia also raised four young children by herself until her husband returned in 1865.

The stone tower and dwelling didnt stand up well to the extreme weather of the Upper Peninsula, and in 1865 the Lighthouse Board submitted an estimate for extensive repairs and renovations. Congress provided $13,000 on April 7, 1866 for repairs and renovations, but during the following months a completely new lighthouse was constructed on the point. This second incarnation was built of yellow brick and consisted of a dwelling with a square tower centered in its lakeward-facing gable end.

In 1870, a fourth-order Fresnel lens that illuminated an arc of 270° replaced the previous lens, which had an arc of just 180°. A ten-inch steam whistle was added to the station in 1874, and six years later it was joined by a duplicate whistle for increased reliability. The fog signal buildings were placed at a lower elevation nearer the lake and were linked to the dwelling by an elevated walkway.

The number of hours the coal-fired steam whistle was in operation each year varied greatly. In 1887, the stations whistle blew for a record 697 hours, or about eight percent of the time, while in 1904, it sounded for just 189 hours, or just two percent of the time. On average, the steam whistle was in operation 325 hours a year and consumed around twenty tons of coal.

Albert N. Barney was assigned to Marquette Lighthouse as an assistant keeper when the fog signal was established in 1874, but additional housing was not provided until 1896, when the stations barn was converted into a dwelling. A second dwelling was later built on the point.

A parabolic sound deflector, made of pine framework that was covered with iron and filled with sawdust, was placed around the whistle atop fog signal building No. 2 in 1897. This addition was prompted by annoyed residents of the city, evidenced by the following which appeared in the Mining Gazette: Sensitive nerves were tortured again last night by the dismal tooting of the fiendish fog horn. This vociferous nuisance is a necessary evil, to be sure, but that consideration doesnt help to reconcile those whom it keeps from obtaining necessary sleep.

Work on a new brick fog signal building on the point commenced in 1911 and was completed the following year when a compressed-air siren was installed to replace the old steam fog whistles. The air compressors were changed from oil driven to electrically driven in 1922, and in 1941, a two-tone air diaphone took the place of the air siren. A radiobeacon was added to the station in 1928 as an additional aid for mariners navigating during thick weather.

Water for the keepers was taken directly from Lake Superior until 1894, when the dwelling was linked to the citys water mains. In 1902, an unused strip of land on the west side of the lighthouse reservation was sold to the City of Marquette.

Captain Patrick McGuire was keeper of Marquette Lighthouse from 1882 to 1893, and during most of this time, his wife Catharine served as his assistant. According to an 1891 newspaper article, women assistants were not allowed at stations with a fog signal, but the local inspector winked at the arrangement since Captain McGuire was one of the most valued keepers on the Great Lakes. In March 1891, Catharine McGuire went off to visit her sisters in Chicago without giving proper notice. On the next visit of the inspector, Captain McGuire faithfully reported that his wife had been absent without permission, and her term as assistant keeper was soon brought to an end.

William Wheatleay replaced Patrick McGuire as head keeper in 1893 and served until April 30, 1898. On that day, he and Will Brandon set out in a small sailboat, and when they were about a mile north of Little Presque Isle, a squall struck and overturned the boat, throwing the two men into the water. Brandon succeeded in swimming to shore, but Keeper Wheatleay chose to cling to the boat rather than trust his endurance to the icy waters of Lake Superior. No other boats were in the vicinity to offer assistant, and the wind soon blew the bottom-side-up boat far out into the lake. Keeper Wheatleays body was finally recovered on June 21, and a largely attended funeral was held the next day.

A new fourth-order Barbier, Benard, and Turenne Fresnel lens, which was equipped with four flash panels and produced a red flash every five seconds, replaced the stations fixed lens in 1908. The following year, the illuminant used in the lights lamp was changed from oil to incandescent oil vapor. The light source was changed to electricity in 1921.

As the keepers of Marquette Lighthouse were also responsible for the light and fog signal on the nearby breakwater, the position of second keeper was added to the station in 1910. To provide more living space, a work crew arrived in 1910 and converted the old brick lighthouse into a duplex by increasing the height of its walls to create a full second story. The lighthouse received its now familiar red daymark in 1911 and an addition to its shoreward side in the 1950s.

Charles Kimballs term of twenty-two years as keeper of Marquette Lighthouse is by far the longest. When he retired on April 30, 1925 at the age of seventy-one, Keeper Kimball concluded a career that had started nearly fifty-three years earlier with his appointment as an assistant keeper at Pointe aux Barques Lighthouse. After six years as an assistant at Pointe aux Barques, Keeper Kimball served as the first head keeper of Port Austin Reef Lighthouse for five years and then head keeper of Whitefish Point Lighthouse for twenty years before being transferred to Marquette in 1903.

On November 1, 1911, the 179-foot steamer D. Leuty, captained by W.C. Sparling, ran aground at Lighthouse Point during a snowstorm. Captain Sparling blamed the wreck on the fact the fog whistle was not sounding. Keeper Kimball confirmed that the whistle was silent at the time, but that was only because enough time had not elapsed since it began snowing to build up enough pressure to sound the whistle. Our orders are to start a fire in the whistle boiler whenever we hear a steamboat give three blasts, signifying thick weather on the lake, said Keeper Kimball.

Kimball did hear the Leuty give three short whistles thirty-five minutes before the wreck, but it took forty-minutes to build up the necessary steam. The electric bell at the end of the breakwater was started immediately, but the crew aboard the steamer must not have been able to hear it due to the wind and waves. Had the diesel-powered siren, for which a new fog signal was being built at the time, been in operation, the wreck could have been avoided. The wooden remains of the Leuty are now a popular dive spot.

By 1932, a system of radiotelephones had been established to link offshore lighthouses, like Stannard Rock, Manitou Island, Passage Island, and Rock of Ages, with Marquette Lighthouse. After November 1 of each year, all mail destined for these offshore stations was sent to Marquette, and the keepers there would read the letters to the isolated keepers. Another example of how the system could be used occurred when difficulties with a new solenoid-operated air valve were encountered at Rock of Ages Lighthouse. Rather than make a trip to the light, the manufacturer of the valve was able to provide detailed instructions for overcoming the problem that could be read to the keepers over the radiotelephone. The keepers at Marquette were also able to contact their counterparts at Manitou Island and have them refuel a remote automatic light, which saved the lighthouse tender a 100-mile trip.

In 2002, a thirty-year lease on the lighthouse was finalized between the Coast Guard and Marquette Maritime Museum, which proposed plans to place memorabilia and artifacts on the first floor of the dwelling and restore the second story as a turn-of-the-nineteenth-century keepers residence. The Coast Guard had last used the lighthouse as a residence for its personnel in 1998.

Marquette Maritime Museum was busy repairing the roof of the lighthouse in 2013 and publicizing a Paint the Lighthouse Red campaign to match a Save Americas Treasures grant. During the sesquicentennial celebration of Marquette Lighthouse, held on July 30, 2016, Mayor Dave Campana signed a deed officially transferring the lighthouse to the City of Marquette. One condition of the transfer is that tours of the lighthouse will continue to be offered by the maritime museum.

For a larger map of Marquette Harbor Lighthouse, click the lighthouse in the above map.

Where Highway 41 makes a 90-degree turn near the waterfront in Marquette, go north on Front Street for 0.4 miles to Main Street. Turn right on Main Street and then left on Lakeshore Boulevard. Follow Lakeshore Boulevard around the harbor to the point, where the Coast Guard station, Marquette Maritime Museum, and Marquette Harbor Lighthouse are located.

Tours of the lighthouse are offered several times during the day by Marquette Maritime Museum. The museum is open daily from early June to mid-October from 11 a.m. to 4 p.m. For tour times, call (906) 226-2006. A fourth-order Fresnel lens used in the lighthouse is on display at the museum.

The lighthouse is owned by the City of Marquette and managed by Marquette Maritime Museum. Grounds/dwelling open during tours, tower closed.