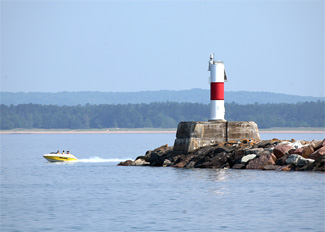 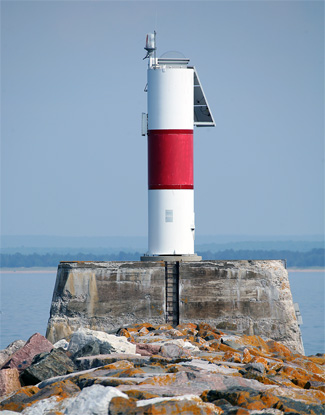 A lighthouse was established on the point north of Marquette Harbor in 1853 to serve vessels involved in the ore trade. In its natural state, the harbor was exposed to storms from the north around to the east and offered only a precarious landing for vessels. The work of improving the harbor began in 1867, and a timber and stone breakwater that extended 3,000 feet out into the harbor was finally completed in 1894. Ships were loaded by hand at the docks in Marquette Harbor until 1858, when the Cleveland Iron Mining Company added a thirty-foot-tall trestle with 100 pockets in it to its existing dock. Once a pocket was filled with ore, a gate at its bottom was opened, and gravity would carry the ore along a chute into the hold of the waiting ship. This new docking system reduced the time required to load a vessel from days to hours.

On September 1, 1875, a fixed red light was first exhibited from an open framework tower positioned eighty-four feet from the outer end of the harbors breakwater. The tower was equipped with a sixth-order Fresnel lens and was linked to shore by an elevated walkway. Prior to being installed on the breakwater at Marquette, the tower was used to mark the entrance to the canal that linked Bete Grise Bay and Lac La Belle on Keweenaw Peninsula.

Storm surge swept away the breakwater tower and roughly half of the elevated walk on November 17, 1886, forcing a temporary light to be erected to serve until the close of navigation that year. Plans for a new tower, to be fueled by gasoline, were prepared during the winter, and bids for its construction were solicited in April. The one bid received was rejected as excessive, and material and labor were instead obtained on the open market. Work began on May 12, the tower was finished on June 25, and the fitting and testing of the gasoline lighting apparatus was completed in time for the new light to be displayed on June 30. The cost for the work was $1,733.87, while the lone bid received was $2,175.

The second tower was carried away by a severe gale on November 28, 1889 and beached about a half-mile from the breakwater. The tower was retrieved and placed back on the breakwater only to be swept away and damaged beyond repair by a northeast gale. A temporary light was exhibited for the rest of the shipping season from a twenty-seven-foot-tall post erected at the outer end of the breakwater.

Contractors provided a skeleton iron tower surmounted by a circular watchroom and fourth-order lantern room to serve as the third lighthouse to mark the breakwater. This more robust tower stood just over thirty feet tall and was placed in operation on December 4, 1890, when a temporary tubular-lantern light was discontinued.

In 1894, the iron tower was moved roughly 1,000 to the end of the recently completed breakwater and placed atop a new foundation that contained a cellar for the gasoline machine that powered the light. The light, which was kept by the keepers of the nearby Marquette Harbor Lighthouse and could run for eight days without being refueled, was first exhibited in its new location on October 1, 1894.

Due to the difficulty of accessing the breakwater in stormy weather, it was decided to try using electricity to operate the light and keep the gasoline outfit on hand as a backup. During 1899, electric wires were extended along the pier and connected to the Marquette electric supply. At this time, the piers wooden superstructure was being replaced by concrete. For a distance of 930 feet, the wire was run through a hollow section in the new concrete superstructure, while for the other 1,897 feet, the wire was fastened to the wooden substructure, two feet below water level. To protect the submerged wire from ice, it was placed in a grooved oak board that was spiked to the crib timbers. The new electric light shone for the first time on the night of July 11, 1899.

The color of the iron tower was changed from brown to white in 1901, to improve its visibility, and in 1908, a new steel tower was built to replace the iron one. The new tower stood thirty-six feet tall and was equipped with a square watchroom and octagonal lantern room. A 1,200-pound fog bell was affixed to the lakeward face of the tower, and the Gamewell striking mechanism was housed in the watchroom. A fourth-order, fixed, Henry-Lepaute Fresnel lens, which had been replaced at Marquette Harbor Lighthouse by a revolving lens, was installed in the breakwater tower in place of a sixth-order lens, and the new light and fog bell were placed in operation on September 12, 1908.

Work on a 1,500-foot, rubble-mound extension to the breakwater at Marquette began in 1914 under a $276,600-contract awarded to Thomas L. Durocher, and on August 14, 1915, the breakwater light was moved back roughly fifty yards so as to not interfere with the work. While the original breakwater ran south, the extension ran southeast, creating an elbow or angle in the breakwater. After the extension was completed in 1917, the old light continued to operate at the angle of the breakwater, while a gas buoy was placed at the outer end.

In 1921, the Lighthouse Service requested $15,000 for a new light and fog signal to mark the extended breakwater. Congress finally provided $16,500 for the project in May 1926, and a construction plant was dispatched to Marquette in June 1927. A concrete pier was built at the end of the rubble-mound breakwater, and the steel tower was moved from the angle to the new pier. A type B diaphone was placed in the tower, and a submarine cable was laid along the breakwater extension to provide electricity for the light and fog signal. A gasoline engine-driven generator was built on shore to supply current in case commercial power failed. The new light and fog signal were placed in operation with the opening of navigation in 1928. The total cost for the project was $14, 299. A skeleton tower displaying a fixed red light was placed at the elbow of the breakwater.

The square steel tower was removed from the outer end of the breakwater in 1985 and replaced by a white cylindrical tower. The fourth-order lens used in the lighthouse is on display at Marquette Maritime Museum.

The ore dock that remains standing in Marquette Harbor today was built in 1931  1932 for the Duluth, South Shore & Atlantic Railroad. The dock is 969 feet long, just over eighty-five feet high, and could hold up to 56,250 tons of ore in its 150 pockets. The dock was closed after the 1971 season, and its trestle approach was torn down in 1999  2000. The concrete dock is an interesting reminder of earlier years when large freighters were a common sight in Marquette Harbor.

For a larger map of Marquette Breakwater Lighthouse, click the lighthouse in the above map.

The fourth-order Fresnel lens used in the previous Marquette Breakwater Lighthouse is on display at Marquette Maritime Museum. The museum is open Tuesday through Sunday from early June to mid-October from 11:00 a.m. to 4:00 p.m.

The tower is owned by the Coast Guard. Grounds open, tower closed.