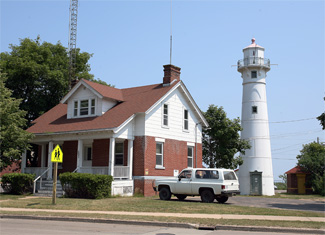 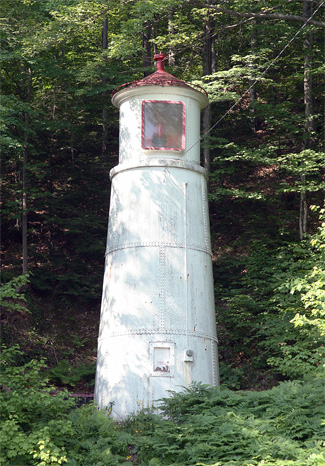 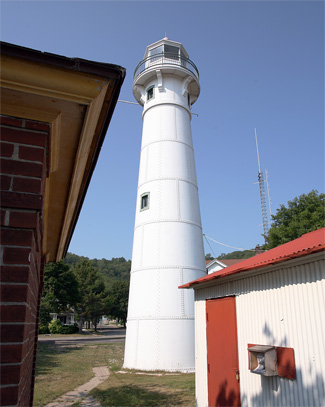 The eastern entrance to the harbor at Munising is bounded by the eastern lobe of Grand Island, known as the Thumb, and the mainlands Sand Point, from which shoals extend for several hundred feet. During the summer of 1868, a wooden lighthouse, known as Grand Island Harbor Lighthouse, was built atop a stone foundation on the southeast tip of the Thumb to guide mariners through the East Channel. In 1905, the Lighthouse Board announced that Grand Island Harbor Lighthouse no longer served the purpose for which it was originally built as mariners using the East Channel were unable to see the light until they were nearly upon it. As the old wooden lighthouse was also difficult and expensive to maintain, the Board requested $13,200 for a pair of range lights in Munising that would be visible at a greater distance. The Board repeated its request for funds the following year, and Congress provided $15,000 for the range lights on March 4, 1907.

A contract to provide two metal towers for the range was awarded to Champion Iron Company of Kenton, Ohio. Lots 16 and 17 were purchased for the front range tower and keepers dwelling, and work on the dwelling began in the latter part of May 1908, with a target completion date of August 3. On June 30, the close of the fiscal year for the Lighthouse Service, the excavation for the dwelling was complete, the foundation walls had been carried up to the grade line and plastered, and the main floor joists were framed. When completed, the redbrick dwelling had a steam radiator in each of its seven rooms for heat and was identical to the keepers dwellings at Grand Marias and Pointe aux Barques that were also built in 1908.

The front tower, located fifty feet east of the dwellings rear door, was built of 5/16 steel plates, and tapers from a diameter of twelve feet at its base to a diameter of eight feet at the lantern room. The fifty-five-foot-tall tower rests on a five-foot-deep concrete foundation, and a spiral staircase leads to its octagonal lantern room, which is encircled by a gallery.

The companion rear tower, located 1,150 feet southwest of the front tower, is just thirty-one feet tall, but thanks to the hillside on which it stands, it has a focal plane of over 100 feet. Both towers originally displayed fixed red lights produced by Adams & Westlake reflector-style lanterns. A brick oil house, capable of holding fifty five-gallon oil cans, was built twenty-five feet east of the front tower.

Keeper George Prior exhibited the light at Grand Island Harbor Lighthouse for the final time on the night of October 29, 1908, and then sailed over to Munising the next day to make the inaugural lighting of the new Munising Range Lights.

The following description of the range lights was published in the Annual Report of the Lake Carriers Association for 1908:

On October 30th, a range of fixed red lights was established at Munising, Grand Island harbor, as a guide for the channel on the east side of Grand Island. These lights are exhibited from conical steel towers, the front light being 77 feet above the lake level and the rear light 104 feet.

The range leads in clear of the Manhattan wreck, which is marked by [a] gas buoy, through the narrows between Grand Island harbor light and the shoals northwest of Sand Point, a red spar buoy marking the outer edge of the shoal extending eastward from the harbor light.

On April 1, 1940, Keeper Alf Evensen retired after thirty-eight years of service on Lake Superior. Keeper Evensen started his career in 1902 as second assistant at Whitefish Point Lighthouse. After one season there, he was promoted to first assistant at Marquette Lighthouse, where he served until being promoted to keeper and placed in charge of Grand Island North Lighthouse in 1908. Keeper Evensen spent the last fifteen years of his career at Munising Range Lights, and at the time of his retirement, his son Harold was carrying on the familys connection with the Lighthouse Service, working as the second mate aboard the lighthouse tender Amaranth. The range lights were electrified in 1941, greatly reducing the work associated with minding them.

Fred W. Hawkins, also a veteran of the Lighthouse Service, was transferred from nearby Au Sable Point Lighthouse to replace Evensen and served from 1940 to 1947 as the last keeper of the range lights.

Munising Range Lights were transferred to Pictured Rocks National Lakeshore in July 2002 under the National Historic Lighthouse Preservation Act. During the winter of 2008  2009, the metal range towers were sandblasted, then sealed with an undercoat and painted. The sandblasting was performed by St. Germain Sandblasting of Negaunee, and workers afterward welded together areas of the tower where oxidation had eaten through the metal shell. The keepers dwelling now serves as offices for three permanent and several seasonal employees of the lakeshores Science and Natural Resources Division.

For a larger map of Munising Range Lighthouse, click the lighthouse in the above map.

In Munising, take Highway 28 towards the western end of town. The front range light is near the junction of Hemlock Street and Highway 28. To reach the rear range light, take Hemlock street south to its end. The dwelling is used as office space for staff from Pictured Rocks National Seashore.

The lights are owned by the National Park Service and are managed by Picture Rocks National Seashore. Grounds open, dwelling/towers closed.