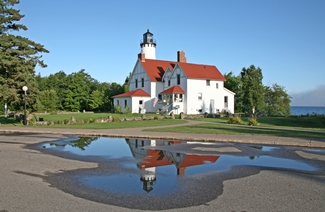 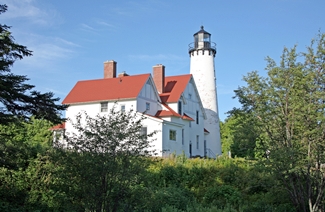 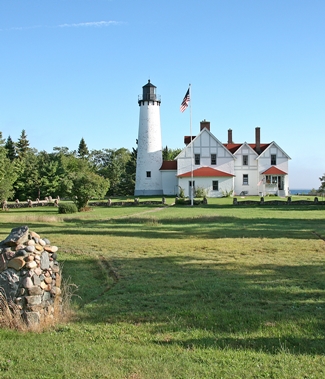 Point Iroquois is situated at the eastern end of Lake Superior at the transition between Whitefish Bay and St. Marys River. In 1662, Ojibwa Indians discovered a group of invading Iroquois camped at the point and managed to wipe them out after a day of fierce fighting, halting the westward advance of the Iroquois. The point was subsequently known by Native Americans as Nadouenigoning, or place of Iroquois bones, which carries more meaning than the English name Point Iroquois. In January 1853, the Michigan legislature passed a resolution requesting its senators and representatives in Congress to use their influence to promote the establishment of thirteen new lighthouses in the state, including one at Point Iroquois and one on the island just off Point aux Chens, at the head of St. Marys River. Two months later, Congress appropriated $5,000 for a lighthouse at Point Iroquois, or on the island off Point aux Chens, Michigan, as the Light-House Board shall determine.

The Lighthouse Board selected Point Iroquois as the site, and a contract for construction of the station was signed in 1854. Work on the lighthouse, which consisted of a cylindrical, forty-five-foot, stone tower, fitted with wood stairs and an octagonal, iron lantern room, was carried out in 1855, and Charles Caldwell, who had previously served as an assistant at Whitefish Point, was appointed the first keeper of the light in 1856. A sixth-order Fresnel lens was used in the lighthouse to produce a fixed white light that had a focal plane of sixty-five feet above the surrounding water. A detached, one-and-half-story, stone dwelling, measuring twenty-eight feet square, was built for the keeper.

The establishment of Point Iroquois Light occurred roughly one year after the opening of the Soo Locks, an event that led to a significant increase in vessel traffic on Lake Superior. In 1867, the Lighthouse Board requested a new iron lantern deck for the lighthouse to replace the existing wooden one. This work may not have been carried out, as two years later, the Board noted that the tower and dwelling were in such poor condition that only temporary repairs should be made until a new lighthouse was finished at an estimated cost of $18,000.

Congress allocated the requested amount on July 15, 1870, and work on a new lighthouse and dwelling began that same year. The second tower stands nearly sixty-two feet tall and tapers from a diameter of sixteen feet at its base to ten feet at the lantern room. A circular iron stairway winds up the brick tower and provides access to the decagonal lantern room, where a fourth-order, L. Sautter & Cie. Fresnel lens was mounted atop a pedestal. Equipped with ten flash panels, the lens revolved once every five minutes to produce white flashes spaced by thirty seconds. An eight-room, brick keepers dwelling was attached to the base of the tower by a covered passageway.

A fog bell, struck a single blow every twelve seconds, was established at Point Iroquois on October 25, 1884 to help mariners navigate in thick weather. In 1888, the Lighthouse Board requested $5,500 for a steam fog whistle to serve the immense number of vessels which concentrate near the point. The necessary funds were provided in an act passed March 2, 1889, and the boilers and machinery were installed in a frame building, twenty-two by forty feet in plan, that was located 400 feet northeast of the lighthouse. First placed in operation on October 31, 1890, the ten-inch steam whistle emitted a five-second blast every thirty seconds. A well provided water for the fog signal, which was in operation about 400 hours per year while consuming roughly twenty tons of coal. In 1896, the old bell tower was taken down and relocated to the station at Grand Marais, Michigan. A forty-foot-tall brick chimney replaced the fog signals sheet-iron smokestacks in 1900.

A circular iron oil house was erected near the lighthouse in 1892 to store the volatile kerosene oil then being used for the light.

The establishment of the fog signal in 1890 necessitated the addition of an assistant keeper to the station, but it wasnt until 1902 that the Lighthouse Board requested funds to provide more living space. This might explain why there were six assistant keepers during this period. A six-room addition to the keepers dwelling was completed on November 11, 1905, creating a duplex. The head keeper resided in the original dwelling closest to the tower, while the assistant keeper was assigned the newer portion.

On May 3, 1913, the intensity of the Point Iroquois Light was increased nearly eight fold my changing its illuminant from oil to incandescent oil vapor. The period of the flashes was reduced in 1913 and then again in 1922, when the characteristic became a flash every four seconds.

In 1914, Keeper William Campbell and Lewis B. Curtis, his assistant, were commended for working with the officers and crew of the lighthouse tender Aspen in fighting a forest fire that threatened the station. The men worked the entire night of May 20 battling the fire.

The fog signal at Point Iroquois was changed from a steam whistle to an air siren on April 13, 1927, and then to a type B air diaphone, powered by electrically operated compressors in 1933. Electricity, provided by electric generators, was also extended to the tower and dwelling in 1933.

Keeper Elmer Byrnes, who served during the period when the lighthouse was electrified, received devastating news on January 17, 1932. His fourteen-year-old son Elmer was hunting with Courtland Holton, a fellow Boy Scout, when Holton accidentally pressed the trigger of his gun, killing Elmer, who was walking in front of him. The bullet pierced Elmers heart.

Betty Byrnes spent most of her childhood at Point Iroquois while her father was serving as keeper. Concerned about his childrens education, Keeper Byrnes petitioned for a school at Point Iroquois for some time before one was finally approved. An old storehouse was remodeled to serve as a schoolhouse, and a young woman was paid by the state to serve as a teacher, while the Lighthouse Service provided her room and board. Six children of the lighthouse families along with three from a nearby fishermans family attended the one-room school, where kindergarten to eighth-grade were taught.

One day Betty Byrnes decided to catch a herring gull for her personal pet. After baiting a hook with a chunk of herring, she tied it to a stake and soon caught a gull. When Betty presented her new pet to the family at breakfast, the angry gull reached up and tore a piece of flesh from her cheek. Keeper Byrnes quickly released the bird, but for the rest of her life, Betty had a dimple on one side of her face.

During winter, Keeper Byrnes and his assistants would take a team of horses out on the ice to fish for herring or to gather foot-thick blocks of ice for the ice house. Warm springs bubbling up in the lake would create soft spots in the ice, and on two occasions, the horses broke through. The keepers would promptly cut them loose from the sleigh and try to help them out, but the horses soon injured each other thrashing about and sunk beneath the icy water. Betty and some other children witnessed a team break through the ice on one occasion, and after the horses sank from sight, they huddled together and cried for their lost friends.

The interesting stone walls on the lighthouse ground are attributed to Keeper John Soldenski, who replaced Elmer Byrnes as head keeper in 1935.

Point Iroquois Lighthouse was deactivated in 1963, just months after the Canadian government established Gros Cap Point Light in Lake Superior two miles northeast of Point Iroquois. The fourth-order Fresnel lens was removed from the lantern room and shipped to the Smithsonian Institution in Washington D.C., and the lighthouse was declared excess property by the Coast Guard. The U.S. Forest Service applied for the lighthouse reservation in 1964 and was awarded the property in 1965.

During the summer of 1970, Bay Mills Tribal Council asserted its claim to Point Iroquois Lighthouse, stating it was their desire to establish an Indian cultural center at the lighthouse. Several young members of the tribe planned to occupy the dwelling, but after a forest ranger opened the structure and showed them the mold that had grown in the rooms, which had not been occupied for seven years, the group quickly lost interest. A few decorated young braves and maidens did climb the tower and stand on the gallery outside the lantern room for at least long enough to have their picture taken for a Sault Ste. Marie newspaper.

Bay Mills-Brimley Historical Research Society, founded in 1981, teamed up with the forest service to restore the lighthouse and establish a museum in the keepers dwelling. The museum held its grand opening in 1988, and significant restoration of the lighthouse occurred during the subsequent two years as part of the bicentennial of the Lighthouse Service. In recent years, resident lighthouse keepers have served as caretakers of the property, spending part of their time working in the gift shop and giving tours. Those interested must be willing to commit to between one and two years at the lighthouse.

For a larger map of Point Iroquois Lighthouse, click the lighthouse in the above map.

From Highway 221 in Brimley, turn left onto Six Mile Road (W. Lakeshore Drive) and follow it for 7.5 miles to Point Iroquois Lighthouse.

For the latest hours visit this webpage or call (906) 437-5272 for more information. The fourth-order Fresnel lens from Martin Reef Lighthouse is on display in the dwelling.

The lighthouse is owned by the USDA-Forest Service and managed by Hiawatha National Forest. Grounds open, dwelling/tower open in season.