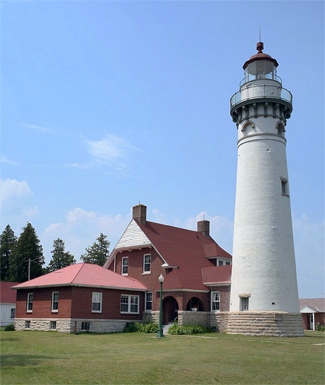 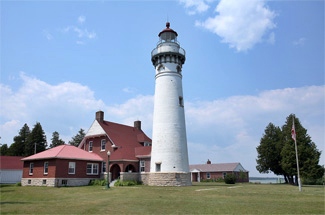 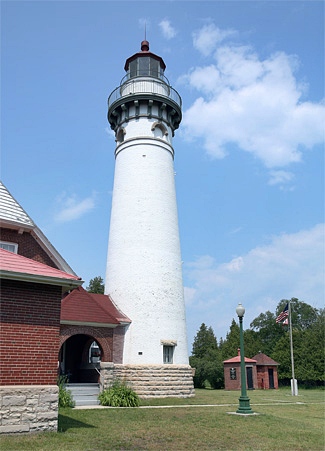 Seul Choix Point was supposedly named by French sailors, who found that the protected bay formed by the point was their only choice for shelter along that stretch of northern Lake Michigans shoreline. Father William Gagnieur, a scholar and itinerant Jesuit missionary among the Native Americans of northern Michigan during the early 1900s, however, claimed that locals called the point Shishewah, derived from the Ojibwa word Shashoweg, which refers to the straight line of the coast. Regardless of the names origin, today its preferred pronunciation is Sis-shwa. By 1850, the bay at Seul Choix was the most important fishing station along the north shore of Lake Michigan. Each summer, roughly 500 men engaged in the industry that had a value of roughly $50,000, but there were few year-round residents in the area.

In its annual report for 1885, the Lighthouse Board noted the following: During the prevalence of northwest winds, this coast is followed by many vessels from Chicago and Milwaukee, and Seul Choix offers a good harbor of refuge in these winds, with good anchorage in from 3 ½ to 4 fathoms of water. There is no light on this northern shore between Poverty Island and Saint Helena [lighthouses], a distance of about 100 miles. Due to the increase of the iron-ore trade at Escanaba, the route along the northern shore of Lake Michigan was becoming more important, and the Lighthouse Board requested $15,000 for a lighthouse to mark Seul Choix Point. Congress appropriated the necessary funds on August 4, 1886, and a site for the station was selected later that month. Plans and specifications for the planned structures were drawn up, but commencement of the work was delayed as the owner of the land had to annul a contract made several years earlier for the sale of the land.

After title to the land was obtained in early 1889, bids for construction of the lighthouse were solicited on two occasions, but each time, the lowest bid exceeded the appropriated amount. Finally, in 1891, the Lighthouse Board directed that the necessary material be purchased on the open market and the work be performed by hired labor. On March 17, 1892, the lighthouse engineer in charge of the project made the following report:

Pursuant to authority granted, the materials were procured and operations at the site were begun August 31. Work was continued until November 16 under very disadvantageous circumstances, the fall weather being exceptionally stormy and severe, involving much loss of time and interruption and delay to the work. Seeing that it would be impracticable to complete the station in time to have it in service by the spring of 1892, I recommended and the Board approved the construction of a temporary tower for the station light, which, in connection with the nearly completed dwelling and other necessary appurtenances, would enable the station to be put in commission. This has been done, but it was found impracticable to complete the permanent tower, which now stands 20 feet high.

It was found impracticable to complete the station with the funds on hand, as the material cost somewhat in excess of the estimate, and the cost of the camp outfit, tools, and other appliances, which might properly have been charged to the general account, since they remained in use at and for other stations, was charged to the special appropriation. The temporary tower and tramway cost about $850, and involved extra transportation in addition, but the largest item of extra cost resulted from the fact that whereas it was expected that rubble stone for the tower and dwelling foundations could be had in situ from the excavation for the cellars as this was made, it was discovered that the material was such as to be totally unfit for the purpose in question, and it became necessary to substitute concrete for the rubble masonry designed for the station. The total extra charges against the appropriation amounted to over $2,500 and the estimated cost of completing it in its permanent form is $3,300.

A temporary fourth-order light was placed in service on April 15, 1892, and the Lighthouse Board requested $3,500 to finish the lighthouse. On August 18, 1894, Congress approved the use of $5,000 set aside for moving range lights on St. Marys River for completing Seul Choix Lighthouse. At the same time, $5,500 was made available for adding a fog signal to the station.

Material for finishing the lighthouse and building the fog signal building were delivered to the point by the lighthouse tender Amaranth in the spring of 1895, and by the first of July, the oil house was completed, the boathouse was nearly finished, the dwelling was replastered, the tower was raised to a height of fifty-six feet four inches, and the brick fog signal building was enclosed.

Seul Choixs handsome lighthouse, consisting of a stone base, brick tower, and metal lantern room, measures seventy-eight feet nine inches from base to ventilator ball, and its third-order Henry-Lepaute Fresnel lens was placed in operation on August 15, 1895. The stations one-and-a-half story dwelling is attached to the tower by a covered brick passageway. The ten-inch steam whistle was placed in service on September 10, 1895 using water pumped from Lake Michigan. The keepers were not as fortunate as they had to obtain their water from the lake, 300 feet away, by bucket.

Joseph Fountain, a Native American who had been serving as keeper of Beaver Island Harbor Lighthouse, was appointed first keeper of Seul Choix Lighthouse in 1892, and he reportedly preferred to live in an old hutch that was not fit for habitation for man or beast, as the new brick dwelling was too much for his primitive notions of comfort. When the permanent light and fog signal commenced operation in 1895, Fountain was joined at the station by two assistants: Eugene Kimball, and Patrick McCauley.

In September 1894, the Schooner William Home left Manistique in two of the steamer Buell and loaded with 579 tons of pig iron. At 10:30 p.m., as the vessels were traveling toward the straits in a heavy southeast gale, the Homes deckload shifted. The resulting strain was too much for the ships old timbers, and water soon began pouring into its hold. The seven crewmembers frantically tried to communicate their predicament to the Buell using torches. When they received no reply, they decided to cut their towline and try to reach shore by raising a sail.

Thirty minutes after the load shifted, the Home sank. The crewmembers were able to escape in the ships yawl, but it soon capsized. Everyone was swept away from the overturned yawl save Anton Minga, who managed to hold on until it blew ashore on Seul Choix Point. Keeper Fountain discovered the unconscious sailor on the shore, carried him back to the lighthouse, and with great difficulty was able to bring him back to consciousness.

The stations steam whistles were powered by steam boilers controlled by Crosby automatics. On average, the whistles were in operation roughly 300 hours each year and required a few tons of coal and several cords of wood.

In 1907, a wooden barn was converted into a four-room dwelling for one of the assistant keepers. When a brick addition for a second assistant keeper was added to the main dwelling, the wooden dwelling was sold and moved to a nearby lake. This structure was returned to the property in 2006 and subsequently restored.

Twenty-seven-year-old William Blanchard was appointed second assistant keeper in 1902 at an annual salary of $425. Two years later, he was promoted to first assistant, and in 1910, he became principal keeper, a position he held until his retirement in 1941. William and Amanda Blanchard had two sons at the lighthouse, Charles and Calvin. Frances Seaman married Charles Blanchard and lived at the lighthouse for several years. The following are some of her recollections of life at the lighthouse:

Everybody always had their rooms spotless and shining. All the walls inside the lighthouse were painted gray, but not really a bad shade. The linoleum in the kitchen was also a gray marble color.

The downstairs hardwood floors were all varnished and the upstairs floors painted gray. An oriental rug was in the parlor and the furniture was dark oak with black upholstery.

In the kitchen was a black, wood-burning stove. A wooden shoe box sat just below the stove. Everyone removed their shoes when they walked inside and the shoes went inside the box, boy did that box ever smell!

We never had electric power, we had a generator. In the pantry was an old wooden cabinet . . . With a zinc top. Amanda Blanchard always did her baking in there.

I remember one time there were two freshly baked blueberry pies cooling on the opened pantry window sill. The Monossos dog came up and ate both pies, was grandma ever mad.

During Keeper William Blanchards service he had two long-serving assistant keepers that shared his first name: William Hanson and William Davis. The keepers were known as The Three Bills. It was William Hansons sixteen-year-old son Willard who built the birdhouse in the form of a lighthouse that can be seen at the station today.

On November 6, 1925, the stations fog signal was changed from steam to air diaphone, and electric lighting was provided.

The stations last keepers left in 1972, when the station was automated following the removal of the third-order Fresnel lens. (The lens was subsequently housed in the Valley Camp Museum in Sault Saint Marie in 1973, but is now believed to be in a private collection according to a sign in the keepers dwelling.) Fearing that the lighthouse would fall victim to vandals, local citizens persuaded the Michigan Department of Natural Resources to purchase the property and lease it to the nearby township. The Gulliver Historical Society was formed in 1987 and opened a museum in the fog signal building in August 1989. The keepers dwelling was restored and furnished in time for the stations centennial in 1995. In 2013, an LED beacon replaced the aerobeacon that had been in use since the towers Fresnel lens was removed.

Marilyn Fischer, who was instrumental in founding the historical society, is convinced the lighthouse is haunted. When she visits the dwelling, she has to leave her two dogs outside. They wont go in, she said. They stop at the door.

Phantom cigar smoke often detected in the dwelling is believed to be evidence that Keeper Joseph W. Townshend never left the station. Keeper Townshend passed away in the dwelling in 1910 and lay in state in the downstairs parlor until his relatives could gather. Keeper Townshends wife never let him spoke his cigar inside the dwelling, but it now seems he is showing everyone he can smoke wherever he pleases. Other unnatural occurrences in the dwelling include relocated silverware on the dining room table, and apparitions in the mirror of an upstairs dresser.

Dont let the ghost stories keep you away from the lighthouse, as well-kept Seul Choix Lighthouse is a must-see attraction on anyones visit to Michigans Upper Peninsula.

For a larger map of Seul Choix Point Lighthouse, click the lighthouse in the above map.

The lighthouse is owned by Michigan Department of Natural Resources and managed by Gulliver Historical Society. Grounds open, tower/dwelling open in season.


Located on the grounds of Seul Choix Point Lighthouse are two poles - a white one and a red one - that are also interesting navigational aids. These two towers along with several others were used to illuminate Rock Cut Channel, when it was opened along St. Marys River.