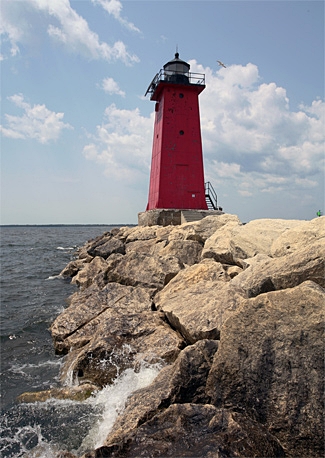 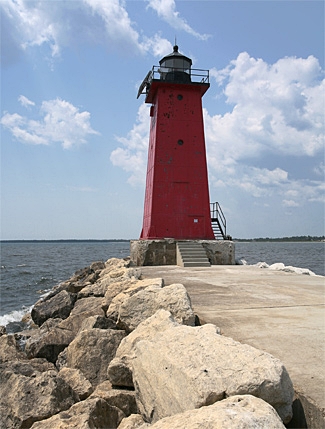 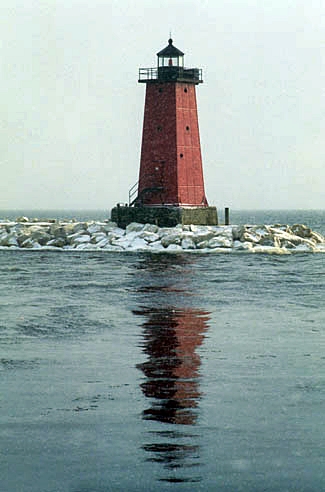 After having been instrumental in the completion of the Soo Canal in 1885, Charles T. Harvey was granted several thousand acres in Michigans Upper Peninsula. Part of this land included the mouth and both sides of the Manistique River, and in 1860 Harvey established a community there and built a dam to power a lumber mill. The settlement was initially named Epsport, after his wifes family name, but its name was later changed to Monistique to match the river. When this name was registered with the state, an a was used instead of an o and the town became Manistique. Monistique is derived from Onamanitikong, a Native American word meaning vermilion that was applied to the river on account of the reddish hue of its water. In 1892, lighthouses were completed at Seul Choix Point and on Squaw Island to mark the northern route for vessels sailing between Lake Huron and Green Bay. The Lighthouse Board felt that another light was needed to mark this important passage, and provided the following reasoning in its request for $32,000 for the project in 1892.

The establishment of the Lake Michigan light and fog-signal vessels, Squaw Island light and fog signal, Seul Choix Pointe light, and the additional buoyage authorized in the northern part of Lake Michigan has made those waters reasonably safe for navigation on the route from the Straits of Mackinac to Green Bay ports, with the exception of a stretch of 45 miles between Seul Choix Pointe and Poverty Island. Pointe aux Barques is a prominent headland 24 ½ miles northeast one-half north from Poverty Island light, and 23 miles west-southwest from Seul Choix Pointe light. Poverty Island light is visible 16 3/4 miles and Seul Choix Pointe is visible 15 miles. There is, therefore, a space of 13 3/4 miles off Pointe aux Barques not covered by any light. The town of Manistique, situated at the mouth of Manistique River, at the head of the bay between Seul Choix and Pointe aux Barques, has a large lumber trade and many vessels call at that port. The route north of the Beavers and along the coast down to Poverty Island passage into Green Bay is the usual route of the ore vessels to and from Lake Erie ports in northwest winds, and the shipments of ore this year from Escanaba are largely in excess, it is said, of those of any port in the world. The Board recommends that a coast light and fog signal be established on Pointe aux Barques, Lake Michigan, Michigan.

The Garden Peninsula extends twenty-two miles into Lake Michigan from Manistique and is bordered by Lake Michigan on its east and Big Bay de Noc on the west. Poverty Island Lighthouse is located off the peninsulas southern tip, and Point aux Barques is a prominent feature on the peninsulas eastern shore. Though the construction of the lighthouse on Point aux Barques was authorized, funds for its construction were never provided.

A lighthouse was finally built in the gap between Poverty Island and Seul Choix Point, but this did not occur until after federal harbor improvements were completed at Manistique. A 423-foot-long breakwater built by private parties and owned by the Chicago Lumbering Company helped protect the harbor at Manistique, but this was turned over to the federal government, and between 1910 and 1915, two breakwaters were built at the mouth of the river, forming an enclosed basin with an area of thirty-one acres. In the early 1900s, car ferries began operating out of Manistique, linking its railroad to the ports at Northport and Frankfort on the Lower Peninsula.

A temporary fixed red light of forty-five candlepower was suspended from a pole to mark the west end of the newly completed east breakwater in 1912, and that same year the Bureau of Lighthouses asked for $20,000 for a permanent light, fog signal, and keepers dwelling. Congress provided the requested amount on October 22, 1913, allowing work to being the following year. A twenty-five-foot, steel, skeletal tower, surmounted by a flashing acetylene light, was established on the west breakwater on October 30, 1914. Also in 1914, a concrete foundation was poured for the permanent east breakwater light, and work began on a duplex for the keepers. The east breakwater light was transferred to the new structure on August 17, 1916. The following description of this light, known as Manistique Lighthouse, was published by the Bureau of Lighthouses.

The subfoundation for this tower consists of a timber crib built by the United States Engineers. It rests on bedrock and supports a concrete superstructure, and this in turn supports a rectangular concrete block, 20 by 25 feet in plan and 6 feet high, forming the immediate foundation for the tower. The top of this block is 10 feet above lake level. The tower is of riveted steel plates and angles, square in plan and pyramidal in shape, three and one-half stories high, and supports a cast-iron deck and an old-style fourth-order vertical bar lantern, whose focal plane is about 40 feet above the top of the block. The main floor is 5 1/2 feet above the block and contains the machinery for the fog signal. Below it and partly within the block is a basement room for storage purposes. Above it the second floor supports the air tanks and the third floor the diaphone and attachments. All floors are of reinforced concrete, and the basement and power room are lined with surfaced cement with air spaces next to the steel plates. The two upper rooms are not lined.

A 300-millimeter lens lantern was used to produce a fixed red light of 340 candlepower at a focal plane of five feet above the lake. A 200-watt, gas-filled, tungsten-filament electric bulb, powered by an electric cable that led along the breakwater to the lighthouse from a switch house, was used in the lens lantern and could be activated from the keepers dwelling using a push-button. A fourth-order lens replaced the lens lantern in 1918, increasing the intensity of the light.

Besides the breakwater lights, a light, with the following description, was also established on the west pier near the mouth of the river: The subfoundation for this light is a timber crib built by the United States Engineers. It supports a wooden post provided with pulley blocks and tackle for hoisting a post lantern. A wooden lamp house is located at the foot of the mast.

The keepers dwelling was located 1,200 feet northeast of the inner end of the east breakwater and was described as follows:

The quarters for the two keepers who attend these aids consist of a two-story and attic dwelling, one set of quarters being over the other. The building is constructed of hollow tile, with stucco exterior, on a concrete foundation and has an asphalt shingle roof. It is heated by hot water, lighted by electricity, and provided with city water and a sewerage system. The basement contains a general boiler room and coal bin for the heating plant and separate coal bins, vegetable rooms, and cellar spaces for each keeper. Each set of quarters consists of a living room, dining room, kitchen, pantry, three bedrooms, bathroom, closets and lockers and an outside porch. There are separate front entrances for each keeper and a general rear entrance. The attic contains large storage spaces for both keepers.

Charles E. Corlett was made head keeper of the lighthouse after having served as master of North Manitou Shoal Lightship. When Keeper Corlett passed away in 1920, Walter Ottosen was transferred from Pilot Island in Wisconsin to take charge of Manistique Lighthouse. At the time Walter and his wife Althea relocated to Manistique, they had eight children, the youngest of which was less than a year old. The Ottosens marriage was in trouble before the move, and by 1925, Althea was neglecting her home and was surly and irritable and [had] adopted an exceedingly disagreeable attitude towards Walter. In trying to learn the reason for her behavior, Walter discovered that Althea was spending time with another man. Althea left Walter for the first of many times in March 1925, and the couple finally divorced three years later. Walter raised his four remaining minor children by himself for four years before marrying Roseline Taylor, whom he met through a magazine or newspaper ad.

A radiobeacon was established at the station at the opening of navigation in 1931 as an additional aid for mariners. Both the railroad and its car ferry at Manistique ceased operation in 1968, and with the decrease in shipping, Manistique Lighthouse was automated the following year. The keepers dwelling was sold, and the fourth-order lens was removed from the tower. The lens can currently be seen at Wisconsin Maritime Museum in Manitowoc.

On May 15, 2012, Manistique East Breakwater Lighthouse was made available under the National Historic Lighthouse Preservation Act of 2000 to eligible federal, state, and local agencies, non-profit corporations, educational agencies, and community development organizations for educational, recreational, cultural, or historic preservation purposes. Interested entities were given sixty days to submit a letter of interest expressing their desire to submit an application for ownership.

After the Manistique City Council voted to approve working with the Michigan Lighthouse Conservancy to acquire the lighthouse, a letter of interest was prepared and submitted. The Council also approved spending $2,500 for an engineering firm to provide a cost estimate for maintaining and preserving the lighthouse. These plans apparently fell apart, as on June 10, 2013, the General Services Administration opened an online auction for the lighthouse. The auction closed on July 15, 2013, with only one bid of $15,000 having been submitted by Bill Collins of Newbury, Ohio. Collins grew up on Lake Erie and always found lighthouses intriguing. After trying to acquire a lighthouse for a while, Collins purchased Liston Rear Range Lighthouse in Port Penn, Delaware in May 2013. Collins had never visited Manistique before purchasing the lighthouse there, but he wasted no time in making improvements to the lighthouse, as Carl Behrend, a local contractor, folk singer, and author, was busy painting the lighthouse in September 2013. Collins later added Gravelly Shoal and Ile Aux Galets to his collection of lighthouses.

Located at the end of a breakwater near the entrance to the Manistique River from Lake Michigan.
Latitude: 45.94476, Longitude: -86.24766

For a larger map of Manistique East Breakwater Lighthouse, click the lighthouse in the above map.

From Highway 2 just east of the river in Manistique, turn towards the river on Marina Drive to enter Lakeview Park. Park in the lot adjacent to the river and follow the boardwalk to the east breakwater at the end of which you will find Manistique East Breakwater Lighthouse.

The keepers dwelling associated with Manistique East Breakwater Lighthouse can be found in Manistique just off Highway 2 at the intersection of Range Street and Washington Avenue.

The fourth-order Fresnel lens used in the tower is presently on display at Wisconsin Maritime Museum in Manitowoc.