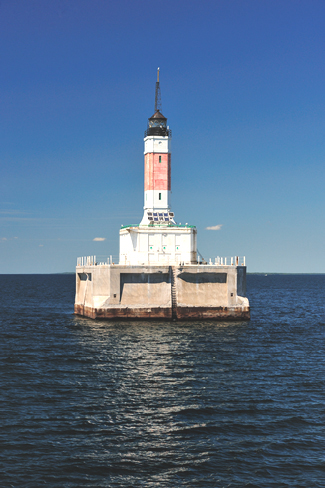 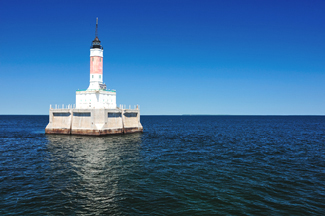 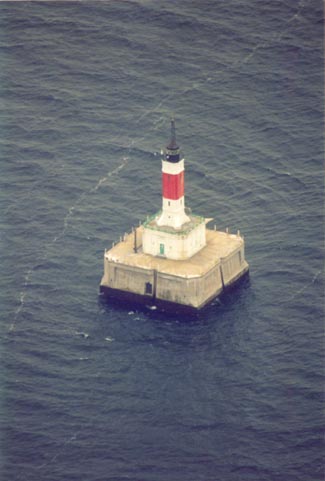 On June 3, 1898, the wooden steamship Minneapolis, built just the previous year in South Chicago, struck an unmarked shoal south of Eleven Foot Shoal Lightship in Green Bay. Captain William Jamieson immediately reported the incident, and just over a month later, Inspector Allibone of the ninth lighthouse district sent out a notice stating that a thirty-foot, red and black horizontally striped spar buoy would be established on July 8 at the spot, which would henceforth be known as Minneapolis Shoal. Mariners were told to give the buoy, which marked the center of the shoal lying seventeen-and-a-half feet below the water, a berth of at least a quarter mile. Point Peninsula Lighthouse had been built at the southern end of Stonington Peninsula in 1865 to help ships sailing to and from ports in Little Bay de Noc, but as larger vessels with deeper drafts were deployed on the lakes, additional aids were needed to mark hidden offshore hazards. A lightship was placed on Eleven Foot Shoal, two-and-a-half-miles off the peninsula, in 1893 and served with Point Peninsula Lighthouse until a permanent structure was completed on Minneapolis Shoal.

Minneapolis Shoal Lighthouse was designed under the supervision of Guy B. Skinner, architectural and structural engineer for the Bureau of Lighthouses. Before the structure was finished, Skinner had been appointed superintendent of the twelfth district headquartered in Milwaukee, and in this capacity, he announced the opening of the lighthouse on July 4, 1936.

Congress appropriated $155,000 for the construction of the lighthouse as part of the Public Works Administration Act passed July 18, 1933. The following detailed description of the work was published following its completion in 1936.

This new light station located on Minneapolis Shoal was placed in full commission at the opening of navigation, 1936, with the exception of the radiobeacon. It takes the place of Eleven Foot Shoal Lightship, long maintained on the opposite side of the channel, marking a turn in the course of vessels bound for the port of Escanaba, Mich. The discontinuance of the lightship effects a material saving in maintenance costs, and there is the further advantage to the fixed station in the service rendered to navigation in the late fall and early spring when ice conditions do not permit the maintenance of floating aids to navigation on station.

The structure stands on hard bottom in 21 feet. The substructure consists of a timber crib 64 feet square [and 20 feet deep], heavily constructed and divided by cross timbers in 49 pockets. The crib was floated to the site and sunk in position, the inner pockets being filled with stone ballast to 1 foot below water level. The outer pockets were then filled with tremic placed concrete. A steel plate 10 feet in width, extending around the entire crib and overlapping its timber to a depth of 5 ½ feet, provides protection of both the crib and concrete superstructure against ice scour. Over the timber crib, a 6-foot mat of reinforced concrete is placed upon which rises the superstructure pier and the lighthouse proper. The pier is of reinforced concrete extending to a height of 21 feet above water and finished with a concrete deck joined to the lighthouse structure proper.

The lighthouse itself is of steel construction, the supporting members being carried directly on the timber crib and extending upward through the mat of reinforced concrete. Space within the pier itself is divided off and utilized for various storage purposes. The machinery required for the operation of the station is placed on the first floor which is depressed below the level of the pier proper although lighted by windows in the superstructure. The main structure is 32 feet square, and over the machinery room, living quarters for the keepers are provided. From this structure rises the square steel tower supporting a fourth-order lens at a height of 82 ½ feet above to the focal plane. The machinery room, the living quarters, and the fog signal room on the first floor of the tower are lined against the steel structure with hollow-tile masonry. The exterior walls and the roof are insulated. The living quarters and machinery space are heated by an oil heater and the building is provided with modern plumbing and lighting facilities.

The illuminating apparatus consists of a flashing fourth-order lens showing a white flash of 20,000 candlepower, 4 seconds duration every 6 seconds. The illuminant is electrically generated at the station; the lens is revolved electrically.

The fog signal is a type F diaphone with its horn projecting from the first story of the tower proper and supplied with compressed air from a Diesel-engine-drive compressing plant in the engine room. The fog signal is synchronized with the radiobeacon at the station for distance finding.

The radiobeacon is of low power adequate to the locality and is supplied with current from the generators and batteries at the station. The compressors and generators at the station are Diesel-engine driven and the entire installation of signaling equipment and machinery is in duplicate. Air hoists are provided, together with two cranes on diagonally opposite corners of the pier for hoisting boats and other materials to the deck.

The pier is protected by heavy riprap and the total cost of the station was $170,600.30

B.J. Gallagher, a marine contractor in Escanaba, employed forty men to construct the foundation crib for the lighthouse. The crib was finished in June 1934, and not long thereafter a contract for the construction of the lighthouse was awarded to Luedtke Engineering Company. During the summer of 1934, the crib was towed to the shoal, sunk in place, filled with stone and concrete, and a portion of the concrete superstructure was completed. The concrete deck was finished in 1935, along with the steel lighthouse, which is nearly identical to Grays Reef Lighthouse that was being built on Lake Michigan at the same time.

Walter Hanson served as the stations first head keeper and was helped by two assistants. Keeper Hanson was ashore in October 1938 when forty-mile-per-hour winds stirred up twenty-foot waves that hammered the lighthouse. The waves swept over the concrete foundation and battered in the steel doors at the base of the lighthouse, allowing water to flood in. The damage done to the station totaled $1,000.

Anton Jessen was in charge of Minneapolis Shoal Lighthouse from 1942 to 1952. When he and his two assistants reached the station in April 1948 to open it for the season, ice three feet thick still surrounded the lighthouse. It usually took about three days to thaw out the light and start operations, and during this period, the wind started pushing huge chunks of ice around the bay.

When the ice first struck you could feel the lighthouse quiver on its foundation, Jessen said. Then it built up a barrier on the shoal and some of the force was absorbed. But the ice piled higher and higher, up to 45 feet high, so that we couldnt see out of the windows in the living quarters.

The keepers werent alone on Minneapolis Shoal during the 1948 shipping season as Second Assistant Keeper Pete Scott had brought along a puppy named Skipper, who became the stations mascot. Though Skipper lived on a concrete island without sand in which to dig, without cats to chase, and without trees to salute, he was well behaved and seemed quite content. When a reporter called at the station that summer, he and other visitors jumped when the fog signal was tested, but Skipper just flicked his ear and kept chewing on his bone.

Don Olesen was sailing in Green Bay in 1973 when he first encountered Minneapolis Shoal Lighthouse, rising out of the lake like a weathered Saturn rocket on its launching pad. As Olesen got closer, he saw a tiny figure grab a line attached to the lighthouses big boom, swing out over the water, and then drop twenty feet into the water. Olesen was invited to join in the fun, and though he didnt, he vowed to return someday for a visit.

This return visit finally happened in 1979 when Olesen and a photographer were ferried out to the lighthouse on a Coast Guard forty-footer performing a crew exchange. Walt Lucas from Wiscasset, Maine was the officer in charge of the station at the time. As a reward for isolated duty, the men serving at the lighthouse got a half-day of compensatory leave for every day worked. This typically translated into two weeks at the station followed by a week of shore leave. Lucas explained that no women or minorities were allowed at offshore stations due to the potential for personality conflicts.

Each of the three men stationed at the lighthouse took turns serving an eight-hour watch so someone was always on duty. At 3:30 p.m. each day, the men all gathered in the galley to watch a MASH rerun. Television is the heart of the lighthouse, and possibly its soul, noted Olesen in his write-up of his twenty-four hours at the station. One wonders how the old lightkeepers coped with life, pre-TV.

Life was usually quiet at the station, except when the stations foghorn is blowing. When Lucas opened up the station in April 1979, Green Bay was still frozen over. As the ice moved out later that month, its grinding power literally shook the lighthouse. China rattled in the cupboards, cups danced across the table, and doors rattled on their hinges. Though placid during Olesens visit, the surrounding water could lather up in a ferocious hurry, creating eight and ten-foot waves that made the base of the lighthouse shudder.

The crew constantly kidded each other to make life at the station tolerable. The previous year, one crewman named Ken was signed up for every free mailing possible by his crewmates. A few weeks later, Ken was deluged with offers for insurance, backyard pools, muscle building, and Army enlistment. In 1979, Minneapolis Shoal was one of just seven manned lights on Lake Michigan, but its days were numbered as the light would be automated the following year. Knowing this was likely, Olesen wrote: After 44 years of service to mariners, this may be the last season that its steel and concrete are warmed by human things  laughter, snores, shouts, cooking smells, dreams, loneliness. The great light will remain; the warmth will be gone.

In May 2015, Minneapolis Shoal Lighthouse was declared excess to the needs of the United States Coast Guard and made available to eligible organizations under the provisions of the National Historic Lighthouse Preservation Act of 2000. Qualified entities were given sixty days to submit a letter of interest and were required to obtain a conveyance from the State of Michigan for the bottomlands on which the lighthouse stands. After no suitable organization was found to assume responsibility for the lighthouse, the General Services Administration (GSA) initiated an auction for the lighthouse on August 18, 2016. Three bidders had participated in the auction, driving the price up to $38,001, when it was terminated on October 27. A representative for the GSA explained that a string of bad luck with weather conditions had prevented the Coast Guard from being able to offer a site inspection. Due to the unique demands of caring for an offshore lighthouse, the GSA chose to terminate the auction and offer the lighthouse again in 2017, with hopes that the weather will be better for an inspection trip.

For a larger map of Minneapolis Shoal Lighthouse, click the lighthouse in the above map.

Minneapolis Shoal Lighthouse is best seen from the water or air. A very distant view is possible from the southern tip of Peninsula Point. We chartered a plane with Orion Flight Services out of the airport near Sturgeon Bay. Shoreline Charters offers an Out Islands Adventure Cruise that can be extended to include a view of the lighthouse.