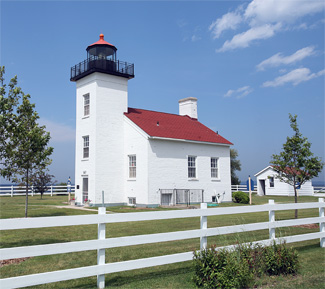 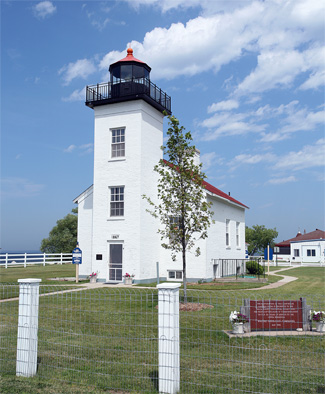 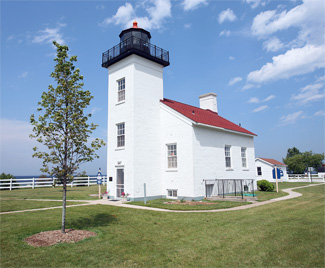 Located on Little Bay de Noc in the northwest corner of Lake Michigan, Escanaba was founded in 1862 in conjunction with the building of a railroad line linking the iron ore mines in Negaunee to Little Bay de Noc. The railroad was completed in 1865 along with a gravity-fed dock for loading the ore onto ships. Anticipating the significance of the port at Escanaba, Congress appropriated $5,000 for a beacon light on Sand Point in Escanaba on July 2, 1864. A suitable site for the lighthouse was selected, but the owner of the land was unable to produce a clear title to the property, a prerequisite before construction could start. This delay gave the Lighthouse Board time to reconsider its plans for the lighthouse, and in its 1866 report it wrote:

The necessity for this light is considered one of great urgency, marking, as it does, the approach to the harbor of Escanaba, a place of growing commercial importance and already one of the main shipping ports of the Lake Superior iron ore. It is recommended that the light be built in a more substantial manner than was anticipated when the appropriation was made, and with this view an estimate of an additional appropriation (seven thousand dollars) is submitted.

Congress provided an additional $9,000 for the lighthouse on March 2, 1867, and with a title to the property recently obtained, work on the lighthouse was carried out during the 1867 season. The lighthouse consists of a rectangular, one-and-a-half-story keepers dwelling, built with yellow brick, with a square tower centered on its western end. A fourth-order Fresnel lens installed in the towers lantern room initially displayed a fixed white light at a focal plane of forty-four feet above the surrounding water.

John Terry was appointed first keeper of Sand Point Lighthouse, but he passed away in April 1868, and it was actually Mary Terry, his wife, who lit the light for the first time on May 13, 1868. As she had no children, Mary kept the light alone until 1886, when she met a tragic end. The Lighthouse Boards report for 1886 provides the following details on her death:

The light-keeper was burned to death and the station damaged by a fire which originated in the dwelling on the night of March 4, 1886. The wood-work and stone caps and sills of the buildings were destroyed, but the brick-work and metal work of the dwelling and tower were left comparatively uninjured. The damage was repaired as soon as practicable, the work having been commenced on April 1 and finished on May 31. The light was shown on the opening of navigation. The actual cost of the repairs was $2,362.72.

As part of a six-man jury appointed to investigate the cause of Mary Terrys death, a handyman named Bordman Leighton testified that he had done some work for the keeper the day before she died and had warned her about some firewood stored too near a furnace. Keeper Terry reportedly replied that she expected to be burned out by it some day, but slept with one eye open to improve her chances. An article in the local newspaper described Mary as a very methodical woman, very careful in the discharge of her duties and very particular in the care of the property under her charge. Some believe that there might have been foul play involved, as the dwellings south door had its bolt shot forward as though the door had been forced, but Marys modest fortune of $4,000 in gold coins was found in the lighthouse.

Lewis Rose replaced Mary Terry, and his service of twenty-seven years was the longest of any keeper at Sand Point Lighthouse. In 1890, the Lighthouse Board noted that as Little Bay de Noc was unobstructed, mariners could use the steam whistle on Eleven Foot Shoal Lightship to reach the harbor with reasonable safety. A steam whistle was deemed unnecessary at Sand Point, but the Board did request $1,100 for a fog bell struck by machinery. The Board repeated this request each year until 1900, when a bell tower was transferred to Sand Point from the discontinued Tail Point Lighthouse and equipped with a fog bell and striking apparatus from Muskegon, where a steam whistle had been established. Keeper Rose placed the fog bell in operation for the first time on May 1, 1900.

Metal handrails were added to the towers stairs in 1901, the same year a brick oil house was built on the stations grounds. The intensity of Sand Point Light was increased from 130 to 500 candlepower on July 1, 1913, when the illuminant was changed to electricity.

On July 6, 1906, eighteen-year-old Edith Rose was up in the lantern room polishing the lens when a lightning bolt hit the tower. The strike reportedly blew out all the windows in the lighthouse, turned all the silverware in the lighthouse a deep brown, demolished an organ, and ejected nails from the walls that burned holes in the carpets. Surprisingly, none of the three occupants of the lighthouse at the time were injured.

When Keeper Lewis Rose retired in 1913, Peter J. Peterson was transferred from Wind Point Lighthouse to take charge at Escanaba, but just two months later he collapsed at the kitchen table and died while his wife was lighting the lamp. Mrs. Peterson was appointed temporary keeper but resigned shortly thereafter, and Captain Soren Kristiansen, master of the Eleven Foot Shoal lightship was made keeper.

In the 1920s, the Bureau of Lighthouses requested around $70,000 to improve the light and fog signal at Escanaba, noting that the ports at Escanaba and Gladstone were some of the most important on Lake Michigan, shipping about seven million tons of iron ore each season in addition to coal, grain, and package freight. The planned improvements were described as follows:

The light at this point was located on its present site at the inner end of Sand Point in 1868. Sand Point projects out into the bay about 1,800 feet from the light, being awash out to the end, beyond which the depth drops off to 40 feet. This point is now marked at the outer end by Sand Point Spar Buoy 3, and while a fog bell, operated by hand-power machine, is located about 1,400 feet from the outer end of the point, they are inadequate aids for the important commerce passing this point. It is proposed to erect a light on a pile foundation, with concrete or steel-sheet superstructure, located near the outer angle of the point, and to erect an inclosed steel-plated tower; run an electric transmission cable from shore, move the present apparatus out to this tower, and illuminate with electricity; install electric-driven air compressors, and modern fog signal in tower operated by remote control from shore, improve the present keepers dwelling, and construct a new dwelling for the assistant keeper.

The request for funds was repeated numerous times, but work on the structure did not begin until August 5, 1938. The work was done by Ludke Construction Company, and the Annual Report of the Lake Carriers Association gave the following description of the new light:

This light is located in 8 feet of water on the sandy shoal called Sand Point in Green Bay and consists of a circular black cylinder of interlocking steel sheet piling filled with stone and capped with a slab of concrete. On the pier thus provided is erected a square steel tower painted white. The tower is surmounted by a 275 m.m. lantern equipped with an electric light showing an occulting white light, 2 seconds eclipse, 4 seconds in duration, of 2,700 c.p. The base of the tower houses a motor-driven compressor supplying air to the diaphragm horn fog signal which sounds a blast of 2 seconds duration every 20 seconds. The signals are controlled by submarine cable from shore.

The old lighthouse was greatly modified to provide improved housing. The lantern room and top ten feet of the tower were removed along with the spiral staircase. The roof of the dwelling was raised four feet to provide space for three bedrooms and a bath on the second floor. Additional windows were cut in the outer walls, and the configuration of the interior walls was modified. The Coast Guard later added aluminum siding to the exterior, further hiding any evidence that the structure had once been a lighthouse.

In 1941, Daniel Garrett, who had been in charge of the lighthouse since 1934, received orders to destroy the stations bell tower after the bell and striking machinery were removed. Garrett set the tower ablaze, and, as noted by a local paper, another of Escanabas old landmarks was destroyed. The completion of the offshore light and foghorn had rendered the bell tower obsolete.

When the Coast Guard announced its plans to abandon and possibly raze the dwelling in 1985, Delta County Historical Society stepped in to save one of the most historic buildings in the area. Using a copy of the original plans, the society began work to restore the original appearance of the lighthouse. The tower was rebuilt, the walls in the upper story were lowered, and a cast-iron lantern room was obtained from Poverty Island Lighthouse. To complete the restoration, a fourth-order Fresnel lens used in the 1927 Menominee Pier Light was installed in the tower. The interior rooms have been furnished to resemble the period when Lewis Rose served as keeper. After five years of restorative work, the lighthouse opened to the public in 1990. Ownership of the lighthouse was transferred to the society in 1998.

For a larger map of Sand Point (Escanaba) Lighthouse, click the lighthouse in the above map.

At the intersection of Highways 41 and 35 in Escanaba, turn east on Ludington Street and follow it 1.7 miles to Sand Point Lighthouse.