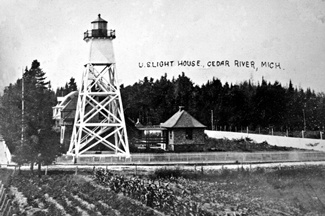 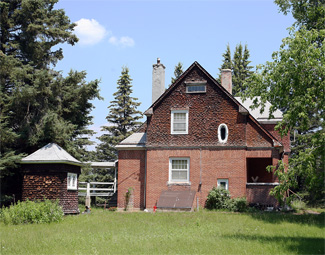 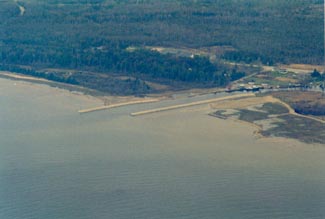 Before improvements, the mouth of the Cedar River was obstructed by a bar covered by just three feet of water. Private interests created a narrow channel with a depth of eight feet, and this served mariners until money was provided in 1882 for federal improvements. In 1883, work began on parallel piers, spaced by 200 hundred feet and extending out to the sixteen-foot curve in Green Bay.

In 1888, the Lighthouse Board provided the following information to Congress in its request for funds to construct a lighthouse at the mouth of the Cedar River.

Cedar River Point is situated at the mouth of Cedar River, about 30 miles north of Menominee, and 32 miles south of Escanaba, Mich., between which ports there are no light-houses. The mouth of Cedar River offers the best anchorage on the west coast of Green Bay, and is much frequented by vessels seeking shelter. It is directly opposite the passage called Deaths Door, through which nearly all vessels pass when bound from Lake Michigan to Escanaba and all ports in Green Bay. The Whales Back Reef is about half-way between Cedar River Point and the Door, and there is no light to mark this dangerous obstruction to navigation.

Congress appropriated $25,000 for the lighthouse on October 2, 1888, and plans were drawn up for a light on the east pier with quarters for the keeper on shore. Construction of the lighthouse began in September 1889, and the station was lighted for the first time two months later on November 20. The lighthouse consisted of a pyramidal, wooden tower, the lower portion of which was open framework with the upper part enclosed to serve as a watchroom. The sixty-seven-foot-tall tower was twenty-four feet square at its base and tapered to eleven feet square at the watchroom. One-foot-square timbers were used for the main supports, with ten-inch-square diagonal braces. A wooden staircase with three landings led up the tower to the decagonal lantern room, where the light from a fourth-order Fresnel lens was displayed.

In 1890, a one-acre site near the west pier was acquired from Jesse Spaulding, president of the Spaulding Lumber Company, for the token sum of one dollar. Jesse Spaulding had purchased a mill at the mouth of the Cedar River around 1862, so he had a vested interest in improving navigation at the harbor. The first mill on the river commenced operation in 1854.

A two-story, six-room keepers dwelling was constructed on the one-acre lot using red brick for the basement and first story, and shingled framework for the upper story. A tight board fence lined the property on the south and west sides, with a picket fence running along the north and east sides. A brick cistern was built in the cellar, and a brick oil house, with a capacity of 300 gallons, was erected near the dwelling.

A pair of range lights was added to the east pier in time to be displayed for the opening of navigation in 1891. In 1902, the front light of this range was displayed from a lantern on the south corner of the tall, pyramidal lighthouse, while the companion rear light consisted of a lantern suspended from a post on the inner end of the east pier, 500 feet from the front light. A well was drilled to a depth of 120 feet in 1895, providing a plentiful supply of water for the station.

The tall, pyramidal lighthouse was relocated from the pier to a site seventeen feet north of the north side of the dwelling in February 1908, where it continued its role as a fixed white coastal light. At the same time, the range lights were moved from the east pier to the west pier. The new front range light consisted of a fixed red lens lantern displayed at a focal plane of twenty-one feet from an eight-inch-square post, while the rear light, also fixed red, was displayed from a similar post at a focal plane of twenty-six-and-a-half feet. A six-foot-square lantern house was located on the channel side of the rear post.

In 1922, the range lights and Cedar River Light were discontinued, and an unattended acetylene light was established atop a thirty-one-foot, steel, skeletal tower on August 9 of that year. The new tower stood on the outer end of the west pier, and its light had a characteristic of a white flash every three seconds.

The River and Harbor Acts of October 27, 1965 authorized the construction of Cedar River State Harbor near the entrance to the river. The harbor serves as a harbor of refuge and offers transient and seasonal slips with modern amenities. A flashing green light is now displayed from a post on the outer end of the west pier.

All that is left of the community that grew up to support the saw mill on Cedar River are two churches and a few residences along M-35. The faux lighthouse that is part of restaurant and the keepers dwelling, hidden in trees on the opposite side of the highway, are the only indications that a formal lighthouse once stood along the banks of the river.

For a larger map of Cedar River Lighthouse, click the lighthouse in the above map.

From Highway 35 in Cedar River, turn east onto No. 20.50 Ln, which is the first cross street south of the river. The keepers residence is located on your right just down the street. Note there is not a lighthouse associated with the dwelling.