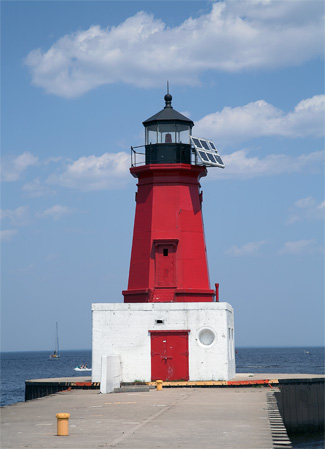 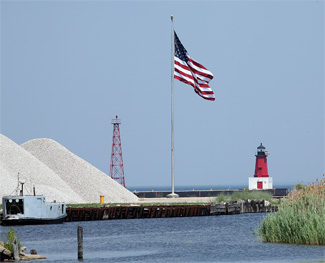 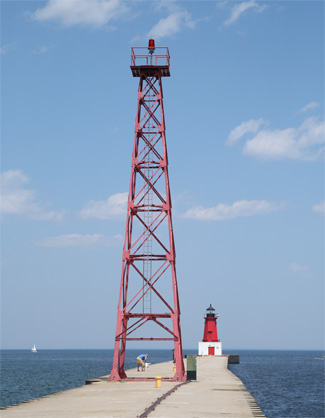 The cities of Marinette, Wisconsin and Menominee, Michigan flank Menominee River before it empties into Green Bay. Menominee River was once an important waterway, as it and its tributaries extended a long distance into Wisconsin and Michigans Upper Peninsula and provided a cheap route for logging. William Farnsworth and Charles Brush built the rivers first sawmill in the 1830s.

Farnsworth has another interesting connection to the area, as the City of Marinette was named after his wife. Marie Antoinette was born to Bartholomew Chevalier, a French trapper, and the daughter of a Menominee Chief named Wauba-Shish, but when people had trouble pronouncing her name, she shortened it to Marinette. At a young age, Marinette married John Jacobs and later moved to the mouth of the Menominee River, where Jacobs partnered with Farnsworth to run a trading post. John and Marinette had three children, but when Jacobs left and never returned, Marinette married Farnsworth and had another three children. After Farnsworth abandoned her around 1833, Marinette continued to run the trading post for several more years and became known as Queen Marinette.

For many years, lumber from mills on Menominee River had to be lightered to offshore vessels as the depth of water at the rivers entrance was just five feet. Harbor improvements began at the mouth of the river in 1871, and over the next few years, two parallel piers, 400 feet apart, were extended into Green Bay. The channel between the piers was originally dredged to a depth of fifteen feet, but in later years the piers were extended into the bay and the depth between them was increased.

A fixed red light of the fifth-order was established at the end of the rivers north pier on January 1, 1877. While many sources claim the current tower was placed on the pier in 1927, this octagonal, cast-iron tower is the one that graced the pier in 1877, the same year a similar tower was commissioned at Vermilion, Ohio. Octagonal, cast-iron towers were also placed at Cheboygan, Michigan and Genesee, New York in the early 1880s.

An elevated wooden walkway provided access to the tower, and in 1879 the walkway was extended 623 feet toward the shore. Just two years later, the tower was moved 305 feet lakeward as the pier was extended, and the same length of elevated walk had to be built.

William A. Holmes served as keeper of the light for its first two seasons, and he was followed by Daniel L. Andrews. These keepers must have had to provide their own lodging as in 1881, the Lighthouse Board noted that a keepers dwelling was much needed at Menominee and requested $5,000 for its construction.

On June 4, 1884, a fire was discovered in the lighthouses foundation crib, but it was quickly distinguished before any serious damage was done. The tower was moved another 345 feet lakeward in 1886, and the elevated walk extended. On September 10, 1891, the light was changed from a fifth-order to a fourth-order fixed red light through the installation of an F. Barbier & Cie. Fresnel lens.

During 1893, 2,040 vessels called at Menominee. This amount of traffic coupled with the massive railway car ferries, which started operating across Lake Michigan between Menominee and Frankfort in 1894, prompted the Lighthouse Board to request $5,000 for a fog signal for the harbor. Congress appropriated the requested funds on June 11, 1896, and during the summer of 1897 the lighthouse tender Amaranth delivered the necessary boilers and machinery for duplicate steam fog signals to Menominee. A frame building was built just shoreward of the lighthouse, and the ten-inch steam whistle was established on September 4, 1897. The fog signal equipment was manufactured by J.P. McGuire of Cleveland and produced a five-second blast every thirty seconds.

Eugene V. Kimball was appointed the stations first assistant keeper in 1897 to help with the extra workload added by the steam fog whistle. After three years at Menominee, Keeper Kimball was transferred to Chicago, but he would return to Menominee as head keeper in 1923, after roughly ten-year stints as head keeper at Kewaunee and Algoma, and serve another fifteen years at the station.

A sound deflector was placed behind the whistle in 1900. Also that year, a fifteen-foot-square concrete foundation was built under the cast-iron lighthouse.

In 1905, the Lighthouse Board again requested funds for a dwelling for the stations two keepers, and surprisingly, the expected cost was still $5,000, the same amount it had been twenty-four years earlier. Congress provided the necessary amount on June 30, 1906, and a duplex was built at the corner of Pengilly and Kirby streets (now 3rd Avenue and 2nd Street). The duplex, which remains standing, originally had a buff-brick first story and green-shingled second story, with six rooms and a basement in each half.

In 1915, an elevated metal walkway taken from Sheboygan North Pier was erected on the pier at Menominee. On June 16 of the following year, a sixty-foot steel tower was placed on the pier 248 yards from the octagonal tower to form a pair of range lights for guiding mariners into the harbor. At this time the two towers were painted white, but by 1921, they had been painted red.

When improvements to the piers were being made by the United States Engineer Department in 1927, the old fog signal building was removed, and the lighthouse was placed atop a concrete block. As part of this work, a diaphone fog signal was installed in the tower, and the light was electrified. A short-range radiobeacon was placed in operation at Menominee in 1941 as an additional aid for mariners.

The lighthouse was automated in 1972, and the metal walkway was subsequently removed from the pier. The fourth-order Fresnel lens from Menominee is now on display in a museum adjacent to Sand Point Lighthouse in Escanaba.

In 2005, Menominee North Pier Lighthouse, deemed excess by the Coast Guard, was offered at no cost to eligible entities, including federal, state, and local agencies, non-profit corporations, and educational organizations under the provisions of the National Historic Lighthouse Preservation Act of 2000. As a result of the application review process, the lighthouse was transferred to the City of Menominee in 2008.

According to the terms outlined in the quitclaim deed transferring ownership of the lighthouse, the city was required to perform regular maintenance on the tower. A June 2013 article in the Eagle Herald noted that the city council, unwilling to spend money on the lighthouse, had failed to live up to the agreement. A few weeks after the article was printed, the city council met to discuss options for preserving the lighthouse. Though one of the council members asked if the city couldnt give the lighthouse back, the general consensus was that it should be kept and restored with help from local organizations.

Thanks to an anonymous donor, the city was finally able to start restoring the lighthouse in 2016. The exterior was repainted, and the interior was stripped down to the plaster and refurbished. The public was invited to tour the lighthouse starting in August 2017, and over 1,000 jumped at the opportunity. Regular tours started on Memorial Day weekend in 2018.

For a larger map of Menominee North Pier Lighthouse, click the lighthouse in the above map.

Where Highway 41 makes a 90-degree turn in Menominee, go east on 10th Avenue to First Street, which parallels the shore of Green Bay. Turn right onto First Street and continue for 0.7 miles to Harbor Drive. Turn left onto Harbor Drive and follow it to the parking area at its end. Menominee Lighthouse can be reached by walking the pier. After the city took ownership of the tower and carried out a renovation in 2017, the lighthouse was opended to the public. Between Memorial Day and Labor Day, tours are offered Thursdays and Fridays from noon to 3 p.m.; Saturdays from noon to 6 p.m.; and Sundays from 1 to 4 p.m.

The lighthouse is owned by the City of Menominee. Grounds open, tower open in season.