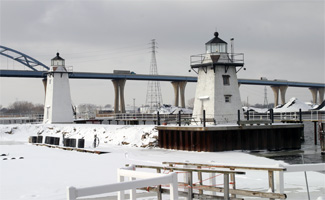 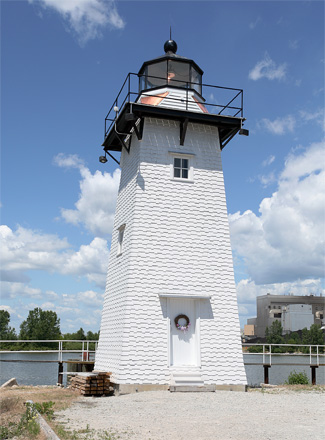 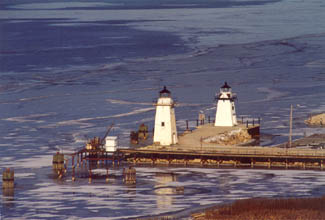 The Board of Navy Commissioners appointed Lieutenant G. J. Pendergrast in 1837 to examine the eligibility of proposed lighthouses on the Great Lakes. Congress had appropriated $5,000 on March 3, 1837 for erecting a lighthouse at the entrance of Green bay, but Pendergrast noted that the lighthouse under construction on Pottawatomie Island fulfilled this purpose. While a lighthouse was needed at Deaths Door, a second entrance to Green Bay used by vessels coming from the southern portion of Lake Michigan, Pendergrast concluded that there were stronger reasons for erecting a lighthouse at the head of the bay near the mouth of the Fox River and recommended the center of Grassy Island as the most eligible place. James T. Homans, another Lieutenant in the Navy, visited Grassy Island the following year and reported, This island was carefully examined by me during my stay there, and decided to be unsuitable for construction of buildings upon it of any durability, and totally uninhabitable by a keeper, being nearly under water, from the great rise of the lake, since the recommendation for a light upon it was made Homans recommended that instead of Grassy Island, located about a mile and half north of the mouth of the Fox River, the lighthouse should be placed on Tail Point, another two miles to the north. It took more than a decade, but Tail Point did receive a lighthouse in 1849.

A special committee of the Lighthouse Board sent to the Great Lakes in 1864 determined that lights were needed in Green Bay on Chambers Island, Peshtigo Reef, and at the entrance to the Fox River. Although Congress appropriated $11,000 for range lights on Grassy Island by 1866, the project could not proceed until a cut being dredged through Grassy Island to straighten the channel leading to the mouth of the Fox River was finished.

Writing in 1867, James B. Quinn, a lieutenant with the United States Engineers, noted the following about the improvements being made to the channel leading to the mouth of the Fox River.

In the present condition of the entrance [at Green Bay] a vessel can get out of Chicago harbor loaded with one hundred tons more freight than it can from this; and by reason of its tortuousness, it is entirely inaccessible by night, and dangerous at all times.

In contemplation of the easier access to Green bay that the present improvement will allow, when completed, vessel owners are calculating upon receiving the freight of Minnesota and northwestern Wisconsin entirely at this port, instead of receiving a large portion of it at Milwaukee and Chicago, as at present. In consequence of the crooked channel, and the difficulty and expense of navigating it, it costs from three cents to four cents per bushel more to ship wheat from this port to the same ports eastward.

Work on dredging the channel commenced in the fall of 1866, but due to problems with the dredge, little was accomplished that year. During 1867, new machinery was used to cut a nine-and-half-foot-deep channel through Grassy Island, and over the next few years the channel was dredged to a greater depth and extended north and south of the island. In 1870, the sides of the cut through Grassy Island were revetted with sheet piling to stabilize the banks.

As the original appropriation of $11,000 had reverted to the treasury, the Lighthouse Board had to request new funds for Grassy Island Range Lights in 1870. With money in hand, work on the structures commenced in 1872, and they were completed that October. The Lighthouse Board published the following notice: On and after the night of Friday, the 15th day of November, 1872, a fixed white light will be exhibited from each of the two light-houses recently erected on Grassy Island, Green Bay, to serve as a guide for vessels through the new cut into the mouth of Fox River. The structures are wooden towers, painted white, and the distance between them is 676 feet 4 inches. The apparatus in each case is a Fresnel lens of the sixth order, illuminating the entire horizon. The elevation of the focal plane of the lower tower is 30 feet, which corresponds to a range of visibility of 11 statute miles, and that of the upper tower 37 feet, being visible at a distance of 12 miles

The Grassy Island Range Lights were positioned on the eastern side of the cut, and a two-story keepers dwelling was built between the lights  500 feet from the front light and 140 feet from the rear light. The front tower measured twenty-seven feet from its base to its ventilator ball, while the rear tower was seven feet taller. Both towers were thirteen feet square at their bases and tapered to eight feet square at their lantern rooms, which were octagonal and had a diameter of six feet. The towers Fresnel lenses were manufactured in Paris, France by Henry-Lepaute. Joseph B. Wing was appointed the first keeper of the range lights.

During a gale in November 1873, water swept over Grassy Island and carried away the walkways that lead to the outhouse, well, and woodshed. The stations well was also filled in by the gale, but it wasnt a big loss as the keeper had been using the bay as a primary water source. A new well, 139 feet deep and equipped with a pump, was drilled near the dwelling in 1884 and lined with four-inch iron pipe.

An area on the first floor of the dwelling, fitted with an oil-butt stand, was used as an oil house until a detached brick oil house was built in 1901. A landing for the stations boathouse was located adjacent to the rear tower.

After being in charge of the range lights for just over twenty-three years, Joseph Wing died in 1895 and was replaced by Ole Hansen, who had previously been keeper of Algoma Lighthouse. In 1901, during the service of Ole Hansen, the position of assistant keeper was added to the station. At the close of 1901, Hansen swapped assignments with Louis Hutzler, who was in charge of Long Tail Point Lighthouse.

A Wisconsin newspaper noted on December 8, 1911 that Joseph Herdina, assistant keeper of the range lights, was missing and believed to have drowned in Green Bay. Keeper Hutzler reported the disappearance of his assistant to the district attorney and said that he believed the thirty-year-old man had committed suicide.

The range lights kept their fixed white signature until 1934, when the fuel for the lights was changed to acetylene gas and the characteristic of the rear light became fixed green and that of the front light a green flash every five seconds. As sun valves had been installed to light and the extinguish the lights, a resident keeper was no longer needed, and Keeper Louis Hutzler retired from the Grassy Island station after having served there for over thirty years.

Dredging on the entrance channel had to be performed almost annually to maintain the desired depth and also to accommodate larger ships. In 1966, the Corps of Engineers was planning on widening the channel through Grassy Island and removing the land on which the range lights stood. The Coast Guard had decided to demolish the structures on site, but Elmer Dost of the Green Bay Yacht club contacted the Corps about the possibility of acquiring the lighthouses. Carl Petersen of the Corps helped the club obtain the lights, and they were relocated to the clubs property on the east side of the entrance to the Fox River in November 1966.

The lighthouses stood on a paved area on the north side of the clubs harbor until 1998, when they were relocated to the breakwall on the west side of the harbor. At this time, a restoration effort was launched that took roughly $400,000 and several years to complete. The restored Grassy Island Range Lights were dedicated at a public ceremony held on November 5, 2005.

Merlin Baenen and David Nelson formed Grassy Island Range Lights, Inc., the group responsible for the restoration of the towers. Two replica sixth-order Fresnel lenses were purhased at a cost of $14,000 each to top of the two restored towers. The lights were placed on the State of Wisconsin Registry of Historic Places in 2004 and on the National Register of Historic Places the following year.

David Nelson passed away in 2017, but he and his wife left behind an endowment that will annually fund $4.5 million in grants for community projects. The first grant awarded was $2.6 million for the lighthouses. That seems like a lot of money for the wooden towers, but their breakwater home wass eroding and had to be replaced. Work on a new larger brekwater, now part of a memorial park named after Dave and Rita Nelson, was carried out in 2018.

A small remnant of Grassy Island still remains to this day, and it is home to a navigational light and a pelican rookery.

For a larger map of Grassy Island Range Lighthouse, click the lighthouse in the above map.

From Interstate 43 just east of the Fox River, take Exit 187 and go north (towards the bay) on Webster Ave./E. Shore Drive. Turn left on Irwin Avenue, which becomes Bay Beach Road. Follow Bay Beach Road to the Coast Guard Auxiliary building and Green Bay Metropolitan Boat Launch, from where the lights can be seen. The range lights are also visible from Interstate 43's bridge over Fox River.