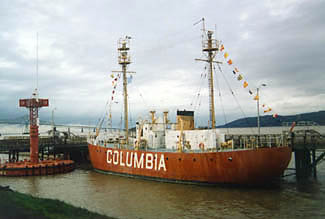 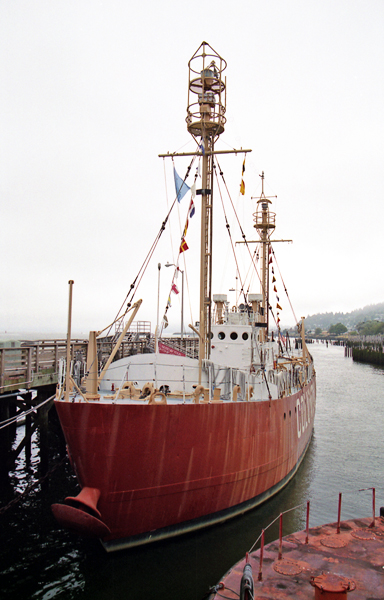 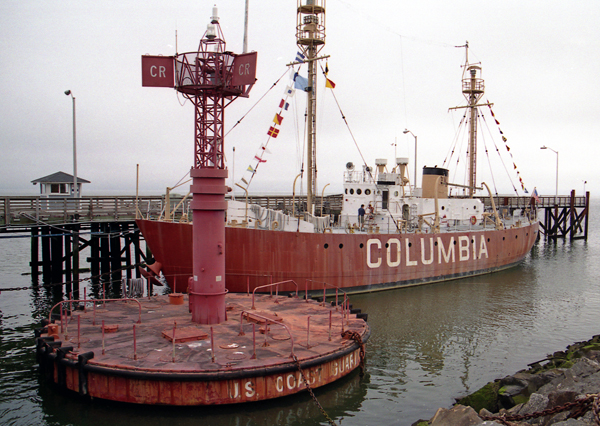 When LV 50 was towed to the Columbia River Lightship Station on April 11, 1892, it became the first active lightship on the west coast. In 1979, eighty-six years after the establishment of the station, a large navigational buoy (LNB) replaced WLV 606, and the last lightship serving on the west coast was retired. LV 50 was a wooden-hulled vessel constructed in San Francisco and housed two coal-fired boilers, which produced steam for a twelve-inch fog whistle. Three oil lamp lenses, used to alert vessels at night, topped the ship's two masts. The ship had no engine for propulsion, but was equipped with sails in case the anchor chain, which held the vessel at a position roughly five miles west of the Columbia River's mouth, broke.

During a severe storm on the evening of November 28,1899, the chain did break. The crew quickly set the sails and kept the vessel from grounding. After several attempts to tow the ship to safety failed the next day, the vessel was intentionally grounded at McKenzie Head near Cape Disappointment. Eighteen months later, after the ship was successfully hauled 700 yards overland, LV 50 was launched into Baker Bay in the Columbia River. The ship returned to station in August of 1901, after a trip to Portland for repairs.

In 1909 LV 88, a steel-hulled ship driven by a steam-powered propeller, replaced the wooden lightship. During her time on station, LV 88 received several enhancements. The ship was outfitted with a radio in 1920, and a radio beacon in 1925. Electric lights replaced her kerosene lamps in 1927, and the steam engine was upgraded with a diesel electric engine in the 1930s. In 1939, LV 88 swapped stations with LV 93, which was serving at Washington's Umatilla Station and was constructed with the same general plans as LV 88. LV 88 served at Umatilla Station until 1959, followed by one year of service as a relief lightship before she was retired. During World War II, LV 88 left her station, was outfitted with a 3" gun, and served as an examination vessel.

LV 93 served at the Columbia River station until 1951, when WAL 604 was assigned to the station. WAL 604 was originally staffed with a crew of sixteen. The crew was divided into three groups. Each group worked forty-two days on followed by twenty-one days off, and the groups were scheduled so that two groups were on the ship at all times.

Joseph McCarthy served two stints on the lightship: as a seaman from 1951 to 1953, and as captain from 1966 to 1967. During his first years of service, the men entertained themselves by reading books, fishing, and playing an awful lot of pinochle and a little cribbage. By the time McCarthy returned as captain, the lightship had been equipped with television, and the crew spent a great deal of time watching movies and TV.

Clint Laurin spent his final year in the Coast Guard aboard the cutter Tupelo and supplied the picture at right of the Tupelo servicing the Lightship Columbia on station on January 13, 1972. Fuel and groceries were transferred to the lightship.

For a larger map of Lightship Columbia WLV 604 Lighthouse, click the lighthouse in the above map.

Columbia River Maritime Museum is located along the Columbia River on Highway 30, also known as Marine Drive, in Astoria. The museum address is 1792 Marine Drive, and there are two museum entrances at 17th Street and 18th Street. The museum is open 9:30 a.m. - 5 p.m. daily (closed Thanksgiving and Christmas) and can be reached at (503) 325-2323.


The maritime museum has many wonderful exhibits besides the Columbia Lightship. I was surprised to find a lantern room and fourth-order Fresnel lens on display. The pieces were provided by the Coast Guard, but the museum does not know with which lighthouse they were associated. On display near the lens is the logbook from the Tillamook Lighthouse, opened to the final entry, along with several other lighthouse-related articles.