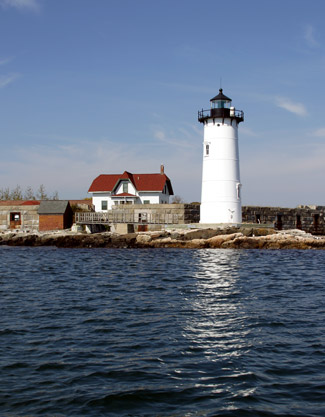 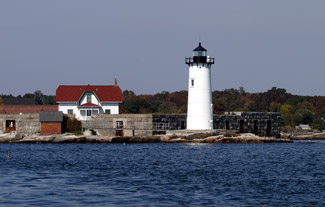 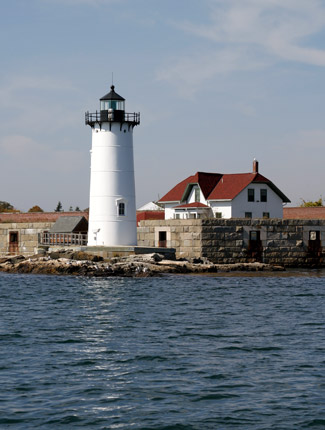 In the 1600s, the British established Fort William and Mary on New Castle Island to defend the entrance to the Piscataqua River and Portsmouth Harbor. Known as the Castle, the fort was manned by soldiers of the Province of New Hampshire that reported to the colonys royal governor. In 1771, Royal Governor John Wentworth had a hexagonal, wooden lighthouse built at Fort Point. The lighthouse was the tenth of eleven to be established in the thirteen colonies before the American Revolution, and it was under the charge of John Cochran, the commandant of the fort. As tensions mounted before the revolution, King George III issued an order forbidding the export of arms and powder to America. When patriots learned of the decree, they took steps to secure a supply of powder.

On December 13, 1774, four months before his more famous ride, Paul Revere rode from Boston to Portsmouth to notify patriots of an imminent seizure of the stores at Fort William and Mary. The following morning, John Langdon recruited several hundred men and descended on the fort. Though greatly outnumbered, the handful of soldiers attempted to defend the fort by firing three cannons and a volley of musket shots, but they were soon overwhelmed by the raiders. No deaths occurred in the skirmish, and Langdons men made off with around 100 barrels of gunpowder. Americans rebuilt the fort starting in 1800 and renamed it Fort Constitution.

While Fort Constitution was under construction, a new lighthouse was built on the point in 1804, 100 yards east of the 1771 tower. A wooden bridge had to be used to access the replacement lighthouse, which stood on a rock near the waters edge.

Portsmouth Harbor Lighthouse was transferred to the federal government in 1791, and on July 18, 1793, the following counsel was given to its keeper:

Up to this time, the light had always been under the charge of the commander of the fort, but this changed in 1793, when David Duncan was hired as a full-time lighthouse keeper. When I.W.P. Lewis inspected Portsmouth Harbor Lighthouse in 1842 he called it an excellent piece of carpentry and gave the following description of it:

A frame building of white pine timber, boarded and shingled outside; octagonal on the plan; height eighty feet; diameter, at angles of base, thirty-seven feet, and twelve feet at the top; underpinning of rubble stone; the whole structure in excellent condition and good order. Keepers dwelling in the village.

At the time, thirteen lamps, set in fourteen-inch reflectors, were used to produce a fixed white light. Lewis noted that since Whaleback Lighthouse had been established in 1831 Portsmouth Light had been reduced to the grade of a simple harbor beacon and could thus be reduced in height and display the light of only one lamp.

When an inspector visited the lighthouse in 1851, there were still thirteen lamps in use. William Vennard, formerly a farmer, had been in charge of the light for tower years, and the inspector noted he had been provided no previous instructions. Perhaps that is why the tower was a bit unkept: Not cleaned up at this late hour; dome of lantern black inside all dirtyeverything very dirty. Oil spilled on the floor and steps.

The tower was shortened to fifty-five feet in 1851, and on December 29, 1854, a fourth-order Fresnel lens replaced the array of lamps and reflectors. As only one lamp was used inside the lens, a significant savings in oil was realized. Prior to the change, 302.21 gallons had been consumed in six months, and afterward only 39.93 were needed over the same amount of time.

In 1871, the old dwelling was torn down and a new one was built on the same foundation. The dwelling was moved to a new site in 1897 and again in 1905 to make room for new fortifications.

The old and decayed lighthouse was replaced in 1877 by a cast-iron tower lined with brick. The iron tower was originally painted white, as its predecessor had been, but in 1887 its daymark was changed to brown. The tower remained brown until it was again painted white in 1902. A brick oil house was built near the tower in 1903.

A bell house was built at the base of the tower in 1896, allowing a 1,048-pound bell to be tolled once every ten seconds. As early as 1886, the keeper had been given a hand bell to be rung in answer to a vessels signal. A foghorn replaced the bell in 1972 and kept the same signature as the bell: a single blast every ten seconds.

After having served at lighthouses in Maine for eighteen years, Henry M. Cuskley was transferred to Portsmouth Harbor Lighthouse in 1915 to replace Leander White, his father-in-law. Cuskley married Mary E. White, Leanders daughter, in 1895, and he followed in the footsteps of his father-in-law, both literally and figuratively, by joining the Lighthouse Service in 1897 and becoming an assistant to his father-in-law at Cape Elizabeth Lighthouse. Cuskley served at Cape Elizabeth for six years, moving up from third assistant to first assistant, before being promoted to head keeper of Libby Island Lighthouse in 1903. Following nine years at Libby Island, Cuskley was in charge of Seguin Island Lighthouse for three years before arriving at Portsmouth Harbor Lighthouse.

During his twenty-six years at Portsmouth Harbor, Cuskley witnessed a submarine, attempting to cut the tide a little too close, end up stranded until the next high tide on a reef just off the lighthouse. Cuskley reportedly also saw a destroyer suffer the same fate on the reef. Besides minding the light, Henry Cuskley was also involved in the community and was serving as chairman of the school board at the time of his retirement in 1941.

Elson Small served from 1946 to 1948 as the last full-time keeper of Portsmouth Harbor Light, which had been electrified in 1934. Elson and Connie Small had lived at four offshore lighthouses in Maine since 1920, including, most recently, sixteen years at St. Croix River Lighthouse. Living on the mainland where they finally had electricity must have been a treat for the couple. Connie, who passed away at the age of 103 in 2005, wrote a book in 1986 entitled The Lighthouse Keepers Wife, which chronicles her life at the lighthouses. The following passage describes the view from the top of Portsmouth Harbor Lighthouse.

I looked down forty feet to the little white scallops of incoming tide washing over the rocks, caressing each one lovingly. We could look up the Piscataqua River to Portsmouth, with its gleaming white belfry of North Church, a landmark for sailors, silhouetted against the sky. At the center of the harbor was Whaleback Lighthouse, and ten miles out to sea from that was the lighthouse on White Island, part of the Isles of Shoals. Both sent their beams across the water.

Coast Guard personnel from the discontinued lifesaving station on nearby Wood Island were transferred to Fort Point in 1948. Until automation of the light in 1960, whoever was standing watch at the station was tasked with turning the light on a half-hour before sunset and turned it off the next morning. The watchstander also had to crank up the fog-bell mechanism every two hours during limited visibility.

A fourth-order lens remains active in the tower today, showing a fixed green light produced by an acrylic cylinder that surrounds the lens. The characteristic has been green since 1941.

For a larger map of Portsmouth Harbor Lighthouse, click the lighthouse in the above map.

From Interstate 95 in Portsmouth, take Exit 5 and go south on Route 1 Bypass for 2.3 miles. Turn left on Elwyn Road, and continue for 1.4 miles until the road ends. Turn left onto Sagamore and then right onto Wentworth Road, which is Route 1B. After 2.2 miles on Route 1B, you will see signs directing you to turn right to Coast Guard Station Portsmouth Harbor and Fort Constitution. Park in the Fort Constitution parking lot and walk to the fort from where you can get a good view of the lighthouse. The tower is accessible during open houses offered by Friends of Portsmouth Harbor Lighthouse on Sundays between 1 p.m. and 5 p.m. from Memorial Day weekend through Columbus Day weekend.

Cruises that pass by the lighthouse are offered by Isles of Shoals Steamship Company and by Portsmouth Harbor Cruises.

The lighthouse is owned by the Coast Guard and leased to Friends of Portsmouth Harbor Lighthouses a chapter of the American Lighthouse Foundation. Grounds/tower open during open houses, dwelling closed.