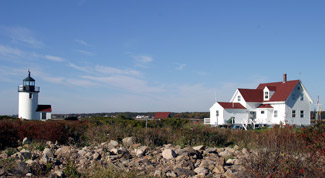 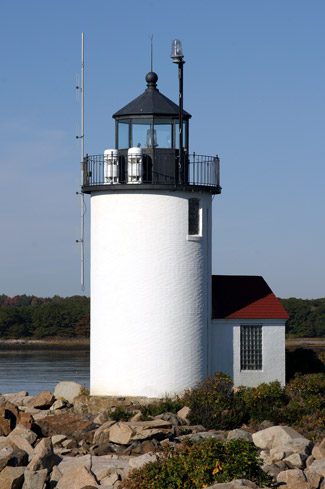 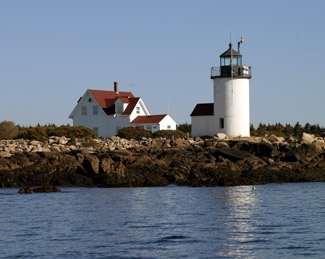 Three-and-a-half-acre Goat Island is located roughly a mile offshore from Cape Porpoise, a quiet vacation spot with a few shops, a few eateries, a few guesthouses, and a lot of Maine atmosphere. When Samuel de Champlain sailed along the coast of Maine and Massachusetts in 1605, he made detailed observations and drew numerous maps and sketches. Upon encountering Cape Porpoise, he named it Le Port aux Isles (Islands Harbor), due to the small islands at its entrance, and noted it was favorable for vessels of a hundred tons. John Smith sailed by in 1614 and bestowed the name that has stuck to this day: Cape Porpus.

Congress appropriated $6,000 on March 3, 1831 for a lighthouse at or near Cape Porpoise, and later that year John Chandler, local customs collector, called for proposals to construct a tower and dwelling on Goat Island. The resulting conical rubblestone tower, topped by an octagonal wrought-iron lantern, was first lit in August 1833. The lighthouse stood twenty feet tall and had a focal plane of thirty-eight feet above mean high water. The original keepers dwelling was a stone house with three rooms on its first floor and another three rooms in its smaller upper story. Adam McCulloch was finally paid $300 for the title to Goat Island in 1846.

John Lord, the lights first keeper, came from an upstanding local family and earned $350 per annum. Thatcher Hutchins succeeded Lord as keeper in 1841.

Only $2,711.80 of the original allotment was spent in building the structures on Goat Island, and it seems the government got what it paid for. Inspector I.W.P. Lewis wrote about the stations poor condition in his 1842 report, noting that the tower was laid up in lime mortar of bad quality, with a loose and leaky roof and decaying woodwork. The keepers house was in similar condition, plus it had rotten cisterns. The eastern portion of the dwelling lacked a proper foundation, and its cracked walls rendered it uninhabitable during the winter.

Keeper Hutchins added that leaks and condensation in the lantern required him to wipe the lantern glass three times per night. The station also lacked outbuildings. Although Hutchins was provided a boat, there was no place to store it, and to house his animals, he had to pay six dollars each year to rent a barn the previous keeper had built on the island.

While George Fletcher was keeper at Goat Island, an August 1850 inspection report noted that the tower and lantern were in good order, and concluded, The keeper is a good one. Not all keepers at Goat Island rose to this high standard. A July 6, 1887 inspection found deplorable conditions, with the dwelling being dirty from top to bottom. The keeper was warned, but a return inspection noted the whole station was found in a dirty condition, with the lens and lantern covered with dust and fly specks, and the dwelling filthy and offensive to sight and smell. Keeper John Emerson was summarily dismissed.

In 1853, Customs Collector Enoch Cousens passed along the publics request for a new lighthouse on Goat Island. Four years later the order came to rebuild it as rapidly as the means  will permit. The light station was in dire shape and required important repairs. A cylindrical brick tower, measuring twenty-five feet from the ground to the base of its octagonal lantern, was completed in 1859. For the convenience of the keeper, the previous tower had been linked to the L-shaped, one-and-a-half-story, wood-frame keepers dwelling by a covered walkway, and the tower inherited this feature. In 1867, a new set of fifth-order Franklin lamps was placed inside the towers fifth-order lens, which had been installed in 1859.

After Emersons dismissal in 1887, the light was cared for by Leander White for a year and then George Wakefield, who moonlighted as a harbor pilot and fisherman. After he died on the island in 1921, Wakefield was remembered for his unusual care and watchfulness which saved lives because he was able to act quickly to bring rescue to sinking vessels.

The numerous reefs and islets at its entrance made entering the harbor at Cape Porpoise a dangerous undertaking. In addition to recording their work in the stations logbook, some keepers also kept a log of nearby shipwrecks. Between 1865 and 1920, forty-six vessels were wrecked nearby, and twenty-eight of these were total losses. Not a single person of the 229 individuals aboard those vessels perished, thanks, in part, to the vigilance of the keepers on Goat Island.

Coastguardsman Joseph Bakken and his family were on Goat Island during a 1947 gale that sent waves crashing across the island, damaging the walkway and boat slip, and sweeping away a fence. During the turmoil, the family forgot about their dog and her newborn puppies. The mother and her litter were later found safe and sound in a box, floating in several feet of water that had flooded the basement.

The stations fog bell was replaced in 1959 by a horn that sounded every twenty seconds. In 1976, locals petitioned the Coast Guard to delay their plans to automate the station. Youre damn right we fought for the light, a local fisherman explained. That lighthouse just isnt something for the tourists to gawk at. Theres a man up there and we know he watches out for us. A machine cant do that.

The Coast Guard listened, and Goat Island remained staffed until the fall of 1990, making it the last station in Maine and one of the last in the entire United States to have a keeper. A modern 300-millimeter optic replaced the historic Fresnel lens upon automation.

In 1992, the station was leased to Kennebunkport Conservation Trust, and in 1998, title to the station was turned over to the trust under the Maine Lights Program. The trust has been actively restoring the station to its 1950s appearance.

Richard Dick Curtis started serving as caretaker on Goat Island in 1994 and was well-known for his jokes, smiles, and laughter. In 2002, Curtis apparently fell overboard and drowned while on a boat ride with his dog and three other dogs he was caring for. Two of the four dogs swam to shore, but the other two were never seen again. Scott Dombrowski, who replaced Curtis as caretaker, shares the belief with many locals that Curtis ghost remains on the island.

According to Dombrowski, things started to happen not long after Curtis death. During a lighthouse tour to the island, Dombrowski overheard a woman say to her companion, This place is haunted. The same lady then told Dombrowski that Curtis had a message for him. She said he was all right, Dombrowski recalls, and that he was going to make his presence known. Later, on the boat launch, the woman kept repeating, One of the dogs made it.

Items gone missing on the island would eventually turn up, always on the kitchen table. And then one day, Dombrowski remembers, it was cold and I was exhausted, so I sat in Dicks easy chair and said, Dickie, give me some heat. There was an old electric heater that hadnt worked for years and much to Dombrowskis astonishment it turned on.

Problems with the foghorn began in 2007, the year Dombrowski hung American and Russian flags at the lighthouse to honor a visit to the nearby Bush estate called Walkers Point by President George W. Bush and Russian President Vladimir Putin. (Goat Island has a good view of the Bush estate, and secret servicemen were often stationed there during the presidency of George H. W. Bush.) Bush senior came on his boat and took pictures, Dombrowski recalls. Then he brought his son and President Putin and said, See, our people want us to work together.  Wanting to know what his invisible friend thought of that, Dombrowski queried, Hey, Dick, what do you think of that?, and the foghorn, which had been quiet, suddenly sounded.

After that, the foghorn began to go off more frequently, even when it was clear. In response to complaints from locals, the Coast Guard tried new sensors and even disconnected the power, but it still sounded. Only after the Coast Guard replaced the entire unit, did Dick stop giving his friendly signals. Dombrowski missed the contact from beyond. It was just a very calming, wonderful presence. I wish hed still show himself.

Keeper Martin Cain had just exited the stations covered walkway in 1978 when the wind-whipped ocean picked it up, folded it like an accordion, and carried it away. On October 12, 2011, Martin and his wife Kathy, who had not been back to the island in thirty-three years, participated in the dedication ceremony that marked the end of a $1 million renovation project. During work that started the previous spring, Kennebunkport Conservation Trust rebuilt the covered walkway destroyed during the Blizzard of 1978 and a bell tower that had been absent since 1962. The original bell, which had been on display at the Kennebunkport Historical Society, was mounted on the new bell tower and rung by all of the roughly forty people ferried to the island for the celebration. Goat Island now looks much like it did during the 1950s.

For a larger map of Goat Island Lighthouse, click the lighthouse in the above map.

From Interstate 95, take the Kennebunkport exit and follow Highway 35 east for 1.8 miles into Kennebunk, and then continue east on Highway 9A for 3.5 miles to Kennebunkport, where Highway 9A merges with Highway 9. Follow Highway 9 northeast for 2.5 miles to Cape Porpoise. In Cape Porpoise, turn east onto Pier Road and follow it to its end on Bickford Island. The light can be seen on the island to the south. Only distant views are possible from land. The best views come from the water.

A small dock on the island, accessible for 1 to 2 hours around high tide, is available for visitors to Goat Island Lighthouse arriving by boat. The resident keepers are happy to give tours of the tower to visitors during the summer months.

New England Eco Adventures offers a tour that lets you land on the island and visit the lighthouse.