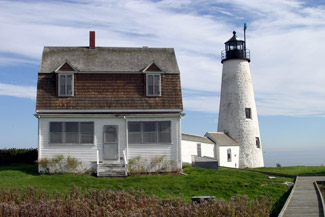 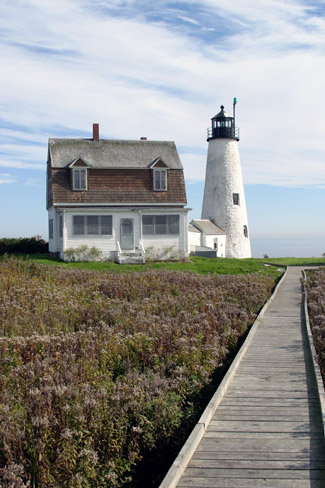 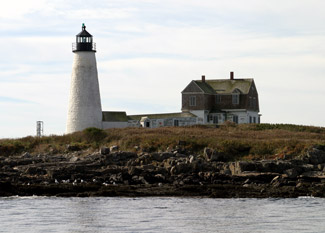 Thirty-five-acre Wood Island is situated two miles east of the mouth of the Saco River and just north of the town and anchorage known as Biddeford Pool. Just a few miles upstream from its mouth, the Saco River divides into two streams that flow around an island and plummet forty feet. These falls were seen early on as a potential power source, and Roger Spencer was granted the right to build a sawmill on the river in 1653. Later, grain and textile mills were also established along the river helping to support the town of Biddeford on the south bank and Saco on the northern bank. An act of March 8, 1806 authorized the Secretary of the Treasury to cause a good and sufficient light-house to be erected on Wood Island, or on Fletchers Neck, in the district of Maine, and to appoint a keeper, and otherwise provide for such light-house, at the expense of the United States. Eight acres of land on Wood Island were purchased from a group of individuals including Pendleton Fletcher for $140 in 1806, and the following year housewrights Benjamin Beal and Duncan Thaxter were awarded a contract to build a wooden, octagonal lighthouse and an accompanying one-story dwelling, measuring seventeen by twenty-six feet. The structures were completed in 1807, but the lighthouse, which was sheathed in shingles, was not activated until 1808 when Benjamin Cole of Saco began his service as the first keeper.

Keeper Cole only served one year on the island before being replaced by Phillip Golthwaite. Keeper Golthwaite lived on the island with his family for twenty-three years until his passing in 1832. His son Tristram then assumed care for the light until weather permitted the family to relocate their cattle and effects off the island in 1833, when Abraham Norwood became keeper.

In the early days of the Lighthouse Service, local collectors of customs were charged with selecting and purchasing sites for lighthouses and overseeing their construction and upkeep. John Chandler, Collector of Customs for the Port of Portland, petitioned for a new lighthouse on Wood Island in 1835 observing that the present tower was rotten and that it rocks so that it is impossible to keep it shored up. The sum of $5,000 was appropriated for rebuilding the lighthouse in 1838, and a new rubblestone tower replaced the old wooden tower the next year. A new dwelling, also built of rubblestone, was constructed at the same time, but so poor was the work that by 1841 plaster was dropping off the walls and the windows were leaking. The new lighthouse exhibited the light from ten lamps set in thirteen-inch reflectors. The lamps were arranged in two levels on an apparatus that was revolved by a rope attached to a clockwork mechanism and weight located beneath the lantern room.

Keeper John Adams provided the following information on the station in 1842:

I was appointed keeper of this light July 6, 1841, upon a salary of $350. This island contains about thirty acres of land, six of which belong to the Government. My dwelling-house is built of rough stone, with brick gables. It leaks about the windows and chimneys; the plastering had dropped off of one chamber entirely, and also in several other parts of the house. There is no floor to the cellar, which is always muddy and wet, the water from the sink leading into it. The joints of the masonry want pointing, being filled now with sand instead of mortar. The house was built by J. Berry, of East Thomaston.

A barn was erected here by the late keeper; also a fence, stone wall, &c. On leaving here, he demanded of me $200 for the barn, 50 cents a rod for the walls and fence; he also claims a portion of the old keepers house, which he cut off therefrom, and converted into a cow-house and pigsty. He also cut off and carried away, last year, all the hay grown upon the island, after I received my appointment. I bought 1 1/2 tons of him, for the feed of my cow, at the rate of $14 per ton. This keeper, Abraham Norwood, has since complained of me, because I declined buying the barn, walling, fencing, and other improvements.

Due to the substandard workmanship used in the 1839 lighthouse, another $5,000 had to be appropriated in 1854 for a third Wood Island Lighthouse. This new stone tower stood forty-seven feet and was attached to a one-and-a-half story dwelling by a covered walkway. The quality of this contractors work is evidenced by the fact that the tower and dwelling remain standing today, though the house was enlarged in 1906 when a full second story with raised dormers was added creating a Dutch Colonial style dwelling.

A pyramidal fog-bell tower was placed near the tower in 1873 to house a Stevens striking-apparatus and support a 1,315-pound, cast-steel bell. Although an automated mechanism was provided for tolling the bell, the station is famous for its four-legged bell striker  a dog named Sailor. Sailor belonged to Keeper Thomas Orcutt, who served at Wood Island from 1886 to 1905. Though the dog, being a mongrel, didnt have an impressive pedigree, it certainly had a talent for ringing the bell. Vessels passing Wood Island Lighthouse would sound their whistle or bell, and Sailor learned to return a salute by grasping the cord attached to the bells clapper with its teeth and giving a lusty tug. The story of the dogs friendly salutes was carried in several newspapers throughout the country. Sailor passed away in the arms of his master just a few months before the keeper himself died.

Not all was idyllic on Wood Island during Keeper Orcutts tenure. Late in the afternoon of June 1, 1896, Howard Hobbs, a fisherman living in a shack on the opposite end of the island, arrived at the lighthouse and told Keeper Orcutt that he has just shot his landlord and neighbor, Frederick Milliken. Hobbs was delinquent in his rent, and when Milliken requested to speak with him, he showed up at Millikens place with a gun. Milliken attempted to ascertain whether the weapon was loaded, but Hobbs, who had been on the mainland drinking earlier that day, promptly fired a round into Millikens abdomen. Hobbs was immediately remorseful and tried to help Mrs. Milliken attend to her husband, but shortly after returning to the scene of the shooting with Keeper Orcutt, Mr. Milliken passed away. Hobbs retired to his shack, where he quickly penned a letter and then took his own life with a shot to his head. Due primarily to this event, Wood Island is considered by some to be haunted, and in 2005 the New England Ghost Project investigated the island for paranormal activity.

Wood Island Lighthouse was electrified around 1950, when generators were placed on the island. Later, the station was connected to the commercial grid via an underwater cable. This modernization simplified life for the resident Coast Guard keepers and led towards the automation of the lighthouse.

According to a 1950 newspaper article, Keeper Earle E. Benson had just tossed out an old battery radio set and welcomed a new television. Keeper Benson and his wife subsequently spent hours watching programs such as the Long Ranger. After watching their first World Series, the couple commented, It was so clear, you could see the lines on the ball.

In the late 1960s, the towers fourth-order Fresnel lens and lantern room were removed and replaced by an FA-125 rotating airport beacon, while a foghorn took the place of the fog bell. In 1976, Marshall Alexander transported the original fog bell to the mainland and left it in the yard of the harbormaster. Soon thereafter, the Coast Guard decided to give the bell to a museum in Delaware instead, but local residents, not about to lose their bell, securely chained it to a tree. Senator Edmund Muskie had to step in to settle the dispute, and the bell was eventually installed on the grounds of the Union Church, before later being moved to Vines Landing.

Yielding to requests by locals to restore the lighthouse to its proper form, a three-person team fabricated a new 1,500-pound lantern room out of aluminum at the Coast Guards Industrial Support Detachment in South Portland in 1986. The finished lantern room was then transported to the island and installed by helicopter. That same year, the light was automated and the last keeper left the island, literally leaving the island to the birds as most of the acreage had earlier been deeded to the Maine Audubon Society.

Sealed up and only occasionally visited by the Coast Guard, the dwelling and tower slowly fell into disrepair, leading the Lighthouse Digest to place the lighthouse on its doomsday list. Coming to the rescue, the Friends of Wood Island Lighthouse, a chapter of the American Lighthouse Foundation, was formed in 2003 to restore, maintain, and interpret the station. The group purchased a vessel christened Light Runner in 2004 and began offering tours to the island. To date, the group has painted the dwelling, installed a handrail in the tower, compiled a detailed history of the station, performed a major renovation of the tower, removed the dwellings covered porch, and rebuilt the open-air porch.

For a larger map of Wood Island Lighthouse, click the lighthouse in the above map.

Take exit 4 or 5 from Interstate 95, and drive east to Biddeford. From Biddeford, take Highway 9 southeast for 5.4 miles and then turn left onto Highway 208 which leads to Biddeford Pool. In Biddeford Pool, turn right onto Orcutt Boulevard (Main Street) and go east as far as you can and park. There is an Audubon trail which parallels a golf course and leads to the shore, from where you can see the light. However, the best views come from the water or a visit to the island. Tours to the lighthouse are provided by Friends of Wood Island Lighthouse.

The lighthouse is owned by the Coast Guard but leased to Friends of Wood Island Lighthouse, a chapter of the American Lighthouse Foundation. Grounds/dwelling/tower open in season.