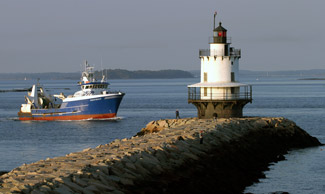 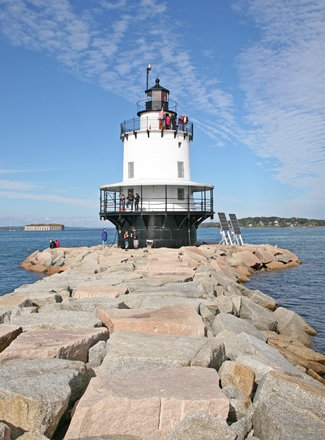 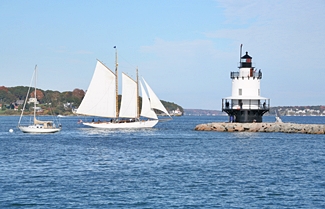 Numerous ships have run aground on Spring Point Ledge, which extends from Fort Preble out to the westerly side of the main shipping channel into Portland Harbor. The ledge reportedly received its name from a spring that once flowed from the nearby bank. On September 7, 1832, the lime coaster Nancy hit the reef. Water and lime make a volatile mixture, and the seawater entering the hold combined with the lime to start a fire that was difficult to extinguish. The inhabitants of Portland helplessly watched as the ship burned to the waterline. After this spectacular disaster, an outraged public demanded a warning system on the reef, but government officials insisted that a light on the planned breakwater at Portland, over a mile away, would be sufficient for the entire harbor. Finally, a huge spar buoy was anchored at the edge of the main channel where the reef began, but it did little good at night or in times of fog, and the shipwrecks continued.

The wreck of the newly commissioned 393-ton bark Harriet S. Jackson proved to be the final straw. During a fierce storm, which caused damage all along the New England coast on March 20-21 1876, the ship ran hard aground on Spring Point Ledge in the middle of the night. The crew hung on until dawn, when they were astonished to find that they were so close to the beach at Fort Preble that they laid down a plank and simply walked ashore. Two days of hard work were required to remove the damaged vessel from the ledge.

Seven steamship companies, which carried over 500,000 passengers to Portland, petitioned the Lighthouse Board, stating that they collectively carried over half a million passengers past the dangerous reef each year, and a better warning beacon was needed to avoid the otherwise inevitable human calamity. The Lighthouse Board eventually agreed, and in their annual report of 1891 they recommended the construction of a fifth-order light and fog bell on Spring Point Ledge near the entrance to Portland Harbor, reasoning that the importance of the harbor, the very large number of vessels which annual resort to it for refuge, the great number of passengers carried into it, which will doubtless steadily increase with the increasing number of people who resort to the coast of Maine in mid-summer, and the frequency and density of the fogs at the very period when the passenger traffic is greatest merited such a measure.

Mariners could use the bell at Spring Point to indicate a turning point in their course towards Portland in times of fog. Previously, captains were forced to determine their position by keeping track of the elapsed time from a bell buoy off Cushing Island or the fog signal at Portland Head, some two miles distant. However, meeting other vessels, which thronged the harbor or were at anchor in the channel in the midsummer season, could easily throw off this reckoning and endanger a ship.

The plea by the Lighthouse Board was repeated for four years, until Congress approved $20,000 on March 2, 1895 for the project and an additional $25,000 the following year. A notice appeared in various newspapers informing interested parties that William R. Livermore, engineer of the first lighthouse district, would accept proposals for furnishing the necessary materials and constructing the lighthouse planned for Spring Point Ledge. Six bids were received in the spring of 1896, ranging from $27,490 to $34,758. The lowest bid belonged to Thomas Dwyer of New York, New York, and he was awarded the contract for the caisson-style lighthouse, similar to those that had been placed in operation in 1890 in Maine at Crabtree Ledge, Goose Rocks, and Lubec Channel.

Construction began on Spring Point Ledge in August 1896 with the leveling of the rock that would serve as a foundation for the lighthouse. With the aid of a full-time diver, work was progressing well until a southeast storm struck Portland on September 6, dumping five inches of rain. Wind-driven waves damaged many of the 1 ¼-inch iron foundation plates, and work had to essentially start anew. On October 25, the tower rose above the water for the first time, and the lantern room, topping off the structure, was hoisted into place early in February 1897. Allentown Rolling Mills of Pennsylvania provided the metalwork for the lighthouse.

William A. Lane, transferred from the lighthouse tender Myrtle, lit the lamp of Spring Point Lighthouse as its first keeper on May 24, 1897. Harry Philips served as the stations first assistant keeper.

The new cylindrical white-brick tower, perched atop the cast-iron caisson, had four floors topped by the watchroom and lantern room. The lowest level was a cellar for coal and equipment storage. The next floor up was the kitchen, and above that were a floor for the head keeper and another one for the assistant keepers quarters. A fog bell hung outside the watch room, although the weights that powered its striking mechanism had to be wound up from inside. The original beacon was a fifth-order Fresnel lens that flashed white every five seconds, with two red sectors abutting a narrow white sector that marked the channel for entering Portland Harbor. Below the cellar, two cisterns were housed in the caisson for storing water collected from the roof of the gallery, that encircled the kitchen level. A hand pump in the kitchen brought the water up for use by the keepers.

In May 1898, shortly after the outbreak of the Spanish American War, mariners were informed that Spring Point Ledge Light, along with the nearby lights at Portland Head and Portland Breakwater, would be discontinued until further notice due to the planting of submarine mines at the harbor entrance and the prohibition of nighttime navigation. The war proved to be brief, and the U.S. mainland never came under attack.

Unlike the situation at some offshore lights, it was normally quite easy for keepers at Spring Point Ledge to go ashore by boat when they wanted. An exception was during the severe storm of January 27-28 1933. After the storm, a local newspaper quoted a Spring Point keeper:

As we have a good harbor, we were not affected much by the storm except that we were marooned off here with a small supply of food, therefore our stomachs gave us the most trouble. It is our custom to go ashore daily for fresh home cooked food, so as the duration of the storm extended beyond that of an ordinary one, we were on the rocks for eatables. And although the senior keeper, Mr. Wilson, is nearing the age of 70, he still has his childish desires for milk and must have at least one quart a day. By the time the storm was over, he was very near weaned. But our wives were eager to see us and had a large supply of food awaiting, so we made up for all that we had lost.

Spring Point Ledge Lighthouse was electrified in 1934, when a submarine cable was run out to it from Fort Preble. A second cable was then run from it to Portland Breakwater Lighthouse so the breakwater light could be operated remotely from the ledge light. A kerosene-engine-driven generator was used for standby in case of a power failure on shore.

The Army Corps of Engineers was authorized to build a 900-foot breakwater at Spring Point in 1946, but Congress didnt approve the necessary funding until 1949. Fifty thousand tons of granite blocks, each weighing between three and five tons, were put in at a cost of $200,000. In June of 1951, the breakwater, whose construction had been contemplated for more than a hundred years, was finally completed.

In 1960, the station was automated, and the Fresnel lens replaced by a 300mm lens. The foghorn was also automated, and it now emits a blast once every ten seconds when needed. This light is one of three of the spark-plug lights left in Maine.

Under the Maine Lights Program, the station was transferred in 1998 to Spring Point Ledge Lighthouse Trust, a group formed by Portland Harbor Museum. The trust opened the lighthouse for tours in 1999, making it the countrys first caisson lighthouse open to the public. The iron canopy over the gallery circling the lighthouse was replaced in 2004. The interior of the lighthouse has been restored and staged with period furniture.

In 2016, the U.S. Department of Justice filed a lawsuit in Michigan on behalf of the Coast Guard to recover the Fresnel lens used in Spring Point Ledge Lighthouse. This Henry-LePaute lens was crafted in France and features six bulls-eye panels that produced the flashing light atop the lighthouse until the light was automated. The lens originally cost $3,200 but is now valued at around $250,000.

Keith Thompson, chairman of the board of trustees for Spring Point Ledge Lighthouse in 2016, was doing research on the lens back in 2009, when he learned the lens was located in Howell, Michigan. It was eventually determined that the lens was in the hands of Steve Gronow, who runs Maritime Exchange Museum. Gronow explained how the lens came into his possession:

We obtained it from the widow of the owner of Automatic Signal, which is the company that removed the lens in the 1950s and converted it to a modernized optic. The lens was given to him by the Coast Guard official in charge of that area back in those days. Both of them are now long gone, and his widow said that they had the lens for over 50 years before her husband passed away. It was his personal legacy to his career in Navigational Aids and the family treasured it very much.

Gronows Exchange offered the lens and another one from Michigans Belle Isle Lighthouse for sale on its website in 2009, but they did not sell. They belong to me and Im the legit owner, Gronow said. The Coast Guard has a long history of pretending to own things they dont.

The Trust hopes the lawsuit will allow the Coast Guard to reclaim the lens. We really want to get that lens back, Keith Thompson said. Its a part of South Portlands maritime history and we want people to be able to see it.

For a larger map of Spring Point Ledge Lighthouse, click the lighthouse in the above map.

From Interstate 295, take Exit 6A, Forest Ave. and then right on State Street (Route 77). Follow State Street through Portland and over the Casco Bay Bridge to South Portland. The bridge feeds directly onto Broadway, which you follow to the stop sign in front of the marina. There, turn right on Pickett St. then left on Fort Road. Follow Fort Road through the Southern Maine Community College campus until it ends at the water. Portland Harbor Museum and Spring Point Ledge Lighthouse will be on your right.

Spring Point Ledge Lighthouse is open to the public during the summer. Click here for dates and times.