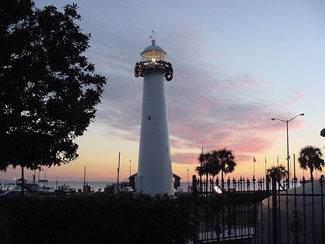 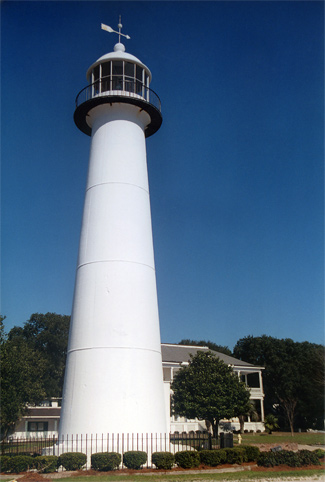 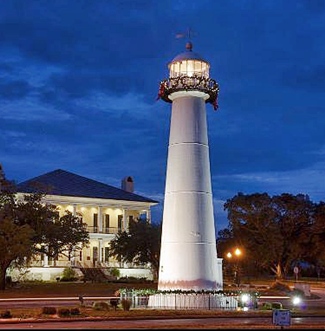 In 1847, Stephen Pleasonton, Fifth Auditor of the Treasury Department, announced, I intend to put a Cast Iron Light House at Biloxi and this will prove the utility which they may be of. Following a $12,000 appropriation by Congress on March 3, 1847, Biloxi Lighthouse became the first cast-iron tower in the South. The utility of the tower was certainly proven in 1998, when Hurricane Georges toppled the masonry tower at Round Island leaving Biloxi Lighthouse the last standing of the more than ten lighthouses originally built to mark the Mississippi coastline. Biloxi Lighthouse was one of three Mississippi Sound lighthouses authorized in 1847 by legislation sponsored by Mississippi Representative Jefferson Davis. A one-acre tract for the lighthouse and keepers dwelling was purchased from John Fayard for $600, and metal plates, cast by Murray and Hazlehurst Vulcan Works in Baltimore under a contract for $6,347, were bolted together to form the lighthouse, which was strengthened by a brick lining. The forty-five-foot-tall tower was completed in the spring of 1848 under the supervision of Henry Scoles, and Marcellus J. Howard was assigned as the first keeper. Part of Keeper Howards job was to service the nine lamps and fourteen-inch reflectors, supplied by Winslow Lewis, that comprised the lighting apparatus. In 1856, a fourth-order Fresnel lens replaced the array of lamps and reflectors.

Although the first keeper was a man, Biloxi Lighthouse would later earn the distinction of having been kept by female keepers for more years than any other lighthouse in the United States. Mary Reynolds was the first female keeper, serving from 1854 to 1866. When the Civil War erupted in 1861, a local group of Home Guards ordered the light extinguished and seized the keys to the tower. After the death of her relatives, Keeper Reynolds was guardian for several orphaned children, who lived with her at the lighthouse. Concerned that her salary would be interrupted during the war, Mary wrote to John J. Pettus, Governor of Mississippi, reporting on the theft of oil from the lighthouse by disreputable characters and noting her diligence in tending the light: I have ever faithfully performed the duties of light keeper in storm and sunshine attending it. I ascended the Tower at and after the last destructive storm [in 1860] when man stood appalled at the danger I encountered. Her stipend likely continued during the conflict, as she is listed as the official keeper until 1866.

Following the war, Perry Younghans was appointed keeper of Biloxi Lighthouse, which was now equipped with a fifth-order Fresnel lens. Although the light is today a good distance from the waters edge, this hasnt always been the case. In the 1850s, the tower stood on the edge of a sand bank, just twenty-nine feet from the shoreline. A 104-foot-long concrete seawall was constructed in 1854 to protect the bank from erosion, something that would have been unnecessary according to Inspector Danville Leadbetter if the tower would have been placed 100 years from the edge of the bank, where it would have been equally efficient and perfectly safe.

During a storm in 1860, part of the seawall collapsed, allowing the surging sea to undermine the foundation on one side of the tower. The resulting void caused the tower to lean two feet from vertical. A plain brick tower might have collapsed under such conditions, but Pleasontons iron sheath, kept the tower intact. Work on restoring the tower after the war started on September 11, 1866 and was completed just over two months later. As part of the restoration work performed during the fall of 1866, earth was removed from beneath the lighthouse on the side opposite the lean, and the tower gradually returned to its former vertical position.

The dilapidated keepers dwelling was also renovated in 1866, and both the tower and dwelling were painted. While the dwelling was painted white, Biloxi Lighthouse received a coat of black coal tar to protect it from rust. This color change led to the persistent myth that the tower was painted black to mourn the death of Abraham Lincoln. As mariners had a hard time spotting the black tower during the day against a background of dark pine woods, Biloxi Lighthouse was repainted white in 1868.

Keeper Younghans died in 1867, during his first year of service, and his wife Maria assumed responsibility for the light. Maria was described as a determined woman, who kept the light burning even in adverse conditions for over fifty years. During one storm, a large pelican broke a glass pane in the lantern room. Maria quickly effectuated a temporary repair, allowing the light to send out its welcoming beam to any sailor who might be caught in the storm.

The New Orleans Daily Picayune of October 21, 1893 noted Marias actions during a hurricane that struck earlier that month: At Biloxi Mrs. Younghans, the plucky woman who was in charge of the light, kept a light going all through the storm notwithstanding the fact that there were several feet of water in the room where she lived. The hurricane heavily damaged the breakwater protecting the lighthouse, but it was repaired the following year using timber and concrete.

In 1877, the Lighthouse Board noted issues with the keepers dwelling: The foundation-sills, frame and wood-work of the dwelling at this station are so far decayed as to render it difficult to make any repairs, without an almost entire renewal of the building. The house is inconveniently arranged, is very old, and should be replaced by a new one. The Board requested $4,000 for a new dwelling, and in 1880 the old one was torn down and a new one built. In 1892, a second-order oil house was added to the station, and a wire fence was put up around the tower and dwelling. A 900-foot-long wharf with boat davits at its outer end was built near the lighthouse in 1902. The stations cisterns were removed in 1906, and the dwelling was connected to municipal waterworks.

During the latter portion of Marias tenure, her daughter Miranda served as assistant keeper. Maria retired on December 31, 1918 at the age of seventy-seven and after more than fifty-one years of service at the lighthouse. When Maria passed away on August 20, 1925, the Lighthouse Service noted that during her service, she had a perfectly clear record and the highest approval for her services. Miranda Younghans was promoted to keeper upon the death of her mother and remained at the light until her retirement on April 23, 1929. The lighthouse was electrified in 1926 during Mirandas service.

The role of lighthouse keeper came to an and at Biloxi Lighthouse in 1940, when Joseph J. Olivier retired and the light was automated. The City of Biloxi acquired the keepers dwelling in 1941 for use as a home for its Chamber of Commerce at a cost of $1,200. Hurricane Camille destroyed the keepers dwelling in 1969, and now, the stout iron tower, owned by the City of Biloxi since being declared surplus property in 1968, stands alone in the median of Highway 90. Spotlights were installed at the base of the lighthouse in 1991 to light the tower at night.

Biloxi Lighthouse survived Hurricane Katrina, which caused so much devastation in Biloxi and the surrounding Gulf Coast in 2005, but the brick lining inside the tower received significant damage. Shortly after the hurricane, an American flag was draped from the top of the lighthouse, making it a symbol of the communitys resolve to withstand and overcome all calamities. Between 2007 and 2012, the beloved lighthouse was featured on Mississippis license plates.

The City of Biloxi and the United States Postal Service held a ceremony at the lighthouse on July 23, 2009 to celebrate the first day of issue of a stamp featuring Biloxi Lighthouse. The stamp was one of a set that featured a lighthouse from each of the five Gulf Coast states.

On February 19, 2010, a rededication ceremony was held for a gleaming white Biloxi Lighthouse that had just undergone a $400,000 makeover, during which the tower was rewired, the interior brick lining was rebuilt, new exterior lighting was installed, and the decorative metal fence surrounding the base of the tower was restored. Inside the tower, blue bands were painted on the brick lining to indicate the level to which the sea rose during various hurricanes. The two highest bands are Hurricane Katrina (2005) that reached 21.5 feet above mean sea level and Hurricane Camille (1969) that rose to 17.5 feet.

For a larger map of Biloxi Lighthouse, click the lighthouse in the above map.

From Interstate 10 north of Biloxi, take Exit 46 to Interstate 110. Travel south on Interstate 110 for just over four miles to Highway 90. Go west on Highway 90, and you will see the lighthouse in the median in less than a half mile.

The lighthouse is owned by the City of Biloxi. Grounds open, tower closed.


Near the Biloxi Lighthouse is Beauvoir, the retirement estate of Jefferson Davis. Davis served as the only President of the Confederacy and then spent the final ten years of his life at Beauvoir, where he passed away in the shadow of the cast-iron lighthouse that was erected as a result of his legislation.

Although the lighthouse was not painted black to mourn the passing of President Lincoln, the iron fence around its base and the tower's door were draped in black mourning cloth following the assassination of President Kennedy. A wreath was also mounted on the door.