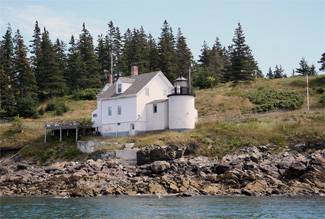 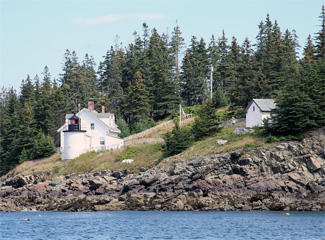 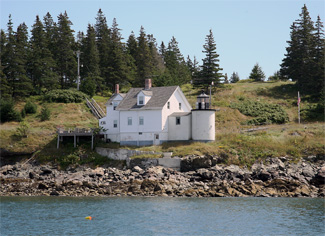 The magnitude of work at many lighthouses required multiple keepers. Some light stations crammed two families into one, small house, which created endless conflicts. Other stations were stag stations, where the keepers lived isolated from their families. But Browns Head Lighthouse, in the Fox Islands, was always a one-keeper family station that despite storms and other hardships seemed to make families closer. Ernie DeRaps (Coast Guard keeper 1961-1962) and his wife, Pauline, recalled gales that blew spray on the upper windows. During a blizzard, Ernie tied one end of a rope around himself and the other end around his six-year-old boy, so that the young man would not be blown away as they trudged through the two-foot-deep snow to the truck Ernie used to drive him to school. We enjoyed being together, even though we were constantly together twenty-four hours, Pauline wrote. We laughed together, we cried together. We paid more attention to the children.

John Baxter (keeper in the 1970s) and his wife Gail had their fourth child, Stephen, at Browns Head Lighthouse in 1973. Stephen was the first baby born in a lighthouse under Coast Guard control and is likely the last baby born at any light under the Coast Guard. Gail vividly remembered one storm in particular. Once we had a storm and I watched lightning hit the rocks and it scared me to death. I was cooking one night and lightning came in and went right around the burner. And lightning hit the telephone pole at the top of the hill and split it in two.

Before Browns Head Lighthouse was automated in 1987, one of the last keepers was Charles Lawson, who was joined by his wife Valerie and their two sons. I thought I would hate the loneliness and the confinement, Valerie said. But I grew to love the lighthouse, partially because Chuck was home all the time after all those years when he was away so much. It was the first time we would have had to raise the children together.We are going to miss all that.

One of the earlier keepers, Benjamin Eldridge Burgess, who started in 1867, married his second wife at the light and reared seven children there. They even took in three grandchildren following their mothers death. Tragically, three of Burgess daughters died within four years of each other. He was praised for the exquisite neatness and order of the station and described as a good man, a good servant of Uncle Sam, and a saver of countless lives. After nearly forty years at Browns Head, Burgess retired in 1905 at the age of eighty-one. For the last few years of his career, Keeper Burgess had been the oldest keeper in the lighthouse service.

Historically, the Fox Islands were home to the Red Paint People, who arrived 3,800 to 5,000 years ago, followed later by the Abenaki and other Native Americans. European explorers sailed by in the 1500s, followed in 1603 by English Captain Martin Pring, who dubbed them the Fox Islands for the abundant gray foxes found there. English settlements did not begin in the area in earnest until after the French and Indian Wars in 1763 and then increased quickly after the Revolutionary War. In the Fox Islands, the island and town of Vinalhaven were named for John Vinal, Esquire, who defended islanders in a 1785 court case. The other major island in the Fox Islands became known as North Haven. Browns Head Lighthouse was set on the northwestern corner of Vinalhaven Island to guide trade ships navigating Fox Islands Thoroughfare, the mile-wide strait the runs between the two islands.

Vinalhaven residents have always relied on the sea for a living. From the 1800s to the mid-1900s, local fishing fleets regularly brought in catches of 10,000 pounds or more. Then in 1826, Vinalhavens reputation for its granite began to grow. For the next century, it was one of Maine largest quarrying centers. Local granite went into gun platforms at forts prior to the Civil War and was used in the Brooklyn Bridge, U.S. customs houses, post offices, federal office buildings, mansions, and more. The shift to structural steel and concrete as building materials forced the closure of the largest granite company in 1919, but the granite paving block industry operated on the island until the late 1930s.

A $4,000 appropriation for Brown Head Light Station was approved on March 3, 1831. David Wooster of North Haven was the first keeper to live in the stations rubblestone dwelling and tend the light in the rubblestone tower, and he served until his death at age sixty-one in 1841. Jeremiah Berry built both of the structures at a cost of $1,800. The tower stood twenty-two feet tall to the base of its octagonal, wrought-iron lantern and exhibited a fixed white light, forty-two feet above mean high water.

Collector Chandler, the local lighthouse superintendent, noted on July 27, 1832 that the reflectors in the lantern room were in such bad condition that he assumed they had not been plated with the required six ounces of pure silver. However, he later wrote that the problem resulted from the workman leaving no vent hole, through mistake, and the Keeper being new did not perhaps know what the difficulty was, at first, although he will, I think, make a very good Keeper. The lack of proper ventilation resulted in excessive smoke and heat, but the problem was quickly fixed.

John Calderwood, from Vinalhaven, followed Wooster as keeper, earning $350 per year. When Engineer I.W.P. Lewis inspected Browns Head Lighthouse in 1842, he dismissed its importance, calling it merely a local beacon. Lewis standards were always high, and the stations location and construction did not measure up. He wrote that it was sited so low as to render no service in clearing the numerous ledges near it The tower was laid up in lime mortar of very bad quality. The mortar could easily be taken out by hand and stones could be lifted out of their beds in the wall. The towers stairway and woodwork had rotted, and the entire structure had shifted laterally from the frost. The dwelling was exceedingly rough and defective with cracked walls, a leaky roof, and falling plaster.

The house walls are cracked at all four corners, and settled away from the roof at the southeast end. The cellar is partially excavated only, leaving a sloping bank in one end thereof, which forms a drain for all the water that runs through the walls. The cause of the cracks in the walls owing to bad building, and the want of proper foundation on the downhill side; the frost has upheaved all the stone work. The floor beams of the house are round, just as they came from the woods, and were cut on the side of the house. Some of the studs have still the bark on.

The tower of the light-house is also badly built, and will certainly tumble down, if something is not soon done to save it. The walls are cracked in every direction, and the lantern shakes so in a gale of wind that the chimneys rattle like sleigh bells. The stairs and landing are rotten. Last winter the inside of the tower and staircase was covered with ice every time it rained and froze; afterwards we had to clear the staircase of ice with hot water. The door of the lantern faces the harbor, instead of being on the land side, and intercepts the light of two lamps. The site selected for this lighthouse was on the top of the bluff above the place where it now stands, so that vessels coming in from the southeast are unable to see the light, until they open it by the bluff, called Browns head. If the light had been placed where it should have been, on the top of the bluff, its usefulness to vessels found into Fox Island passage would have been much increased.

Keeper Calderwood had to travel twelve miles to Camden for supplies, and the station boat was worn out and there was no landing near the light. Not surprisingly, the Calderwood family left the next year, in 1843.

They were followed by Howland Dyer and his family, who would spend the next twenty-one years at the light, despite the dilapidated condition of the facilities that would not be remedied for fourteen more years. Dyer was complemented in the 1850 inspection report. The keeper is a first-rate one, and takes good care of the government property intrusted [sic] in his care.

In 1855, Inspector W.B. Franklin reported that the lighthouse was worn out and requested $5,000 to build a new one. A one-and-a-half-story, wood-frame dwelling, linked to a cylindrical brick tower by a covered passage, was completed in 1857. The new tower, equipped with a fifth-order Fresnel instead of the lamps and reflectors used previously, was rather short, measuring just fourteen feet to the base of the lantern. In 1908, a 1,058-pound fog bell, suspended from a pyramidal wooden tower, joined the light as a navigational aid on Browns Head. Before its arrival, the keeper or a family member had to ring a much magnified dinner bell that hung near the door to the house. The fog signal was eventually upgraded to a diaphragm horn in the late 1940s, but in 1951, a fog bell was again put into service at the station. That fog bell, which was used until 1969, is now displayed at the Vinalhaven Historical Society Museum.

On September 15, 1880, the light was changed from white to white and red, [with] the red cut or sector defining the west channel of entrance to Fox Island Thoroughfare, between Fiddlers Ledge and the Bay ledges. Perhaps this confused sea goers, as in 1889, the red sector was replaced by a white sector between two red ones, so that the white light indicated safety and the red light danger.

Other changes to the station came in 1891 in the form of a new fuel house and a 2,000-gallon brick cistern, along with a retaining wall in front of the dwelling. A boathouse and boat slip were added in 1895, and the intensity of the light was increased in late 1901 by replacing the fifth-order Fresnel lens with a fourth-order. A stone oil house was added in 1903 along with new cast-iron stairs that improved access to the lantern.

At a ceremony marking the automation of Browns Head Lighthouse in August 1987, Captain J.E. Williams, commander of the Coast Guard group in Southwest Harbor, remarked: Soon the manned lighthouse, like the dinosaur, will be a thing of the past. With each automation and unmanning, a little bit of our nautical history slips away. After Browns Head was automated, the only staffed lights in Maine were at West Quoddy, Fort Point, and Owls Head. Under the Main Lights Program, Browns Head Lighthouse was transferred to the Town of Vinalhaven in 1998. The towers Fresnel lens remains active and is serviced by the Coast Guard.

While the station grounds were open to the public, the house was closed and occupied by Vinalhavens town manager for many years. On October 23, 2015, Browns Head Lighthouse was transferred from the Town of Vinalhaven to the American Lighthouse Foundation. Plans call for overnight stays to be offered in the lighthouse. If you take the ferry to Vinalhaven from Rockland, it is best to bring your car to the island, as the lighthouse is several miles from the ferry landing. Maybe your own family will be brought together, as the keepers of old, by a visit to Browns Head Lighthouse.

Located near the northwestern tip of Vinalhaven Island, marking the western entrance to the Fox Islands Thorofare, which passes between Vinalhaven and North Haven Islands.
Latitude: 44.111764, Longitude: -68.909496

For a larger map of Browns Head Lighthouse, click the lighthouse in the above map.

The lighthouse is owned by the American Lighthouse Foundation. Grounds open, dwelling/tower closed.