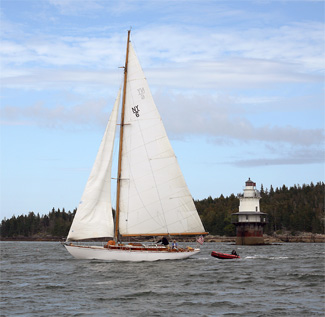 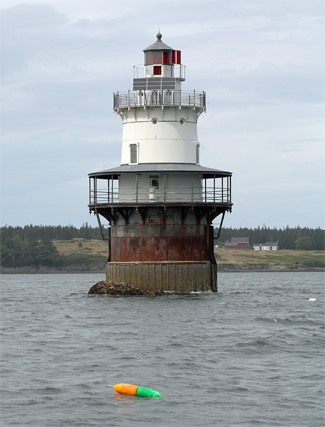 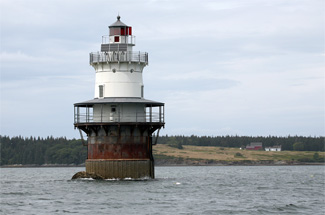 For a fee that helps offset preservation costs, overnight guests now have the possibility to tuck themselves into cozy beds at Goose Rocks Lighthouse, which has been renovated in a period style that provides a glimpse into the life of its keepers. Goose Rocks Lighthouse  a distinctive, so-called spark-plug light completely surrounded by water  is situated in Fox Islands Thoroughfare, which runs between the islands of Vinalhaven and North Haven. These two islands are the largest in a collection of roughly fifty islands named the Fox Islands after the silver foxes observed there by early explorers. The 1888 Annual Report of the Lighthouse Board noted:

This thoroughfare is one of the most important passages on the coast of Maine for large fleets of coasting and fishing vessels. A light-station and fog-signal should be established at or near Goose Rock to guide into the entrance and past Widows Island, and a day-beacon should be built at or near Channel Rock to mark this danger in thick and foggy weather. It is estimated that it will cost $35,000 to establish the light-station and fog-bell and build the day-beacon.

Congress appropriated the requested amount on October 2, 1888, but work on Goose Rocks, which are awash at half tide, did not commence until May 7, 1890. The metalwork and cement for the lighthouse came from Boston, while the necessary crushed stone was obtained on Crotch Island, about eight miles from Goose Rocks. Temporary living quarters for the work crew were built on nearby Widows Island, and a wharf, seventy-six by thirty-two feet, was put in place on Goose Rocks to facilitate the construction of the lighthouse.

A cylindrical, iron caisson, twenty-five feet in diameter and with a height of twenty-four feet, was first anchored atop the ledge to serve as a foundation. After the lower portion of the caisson was filled with concrete, the crew started working on the thirty-seven-foot-tall, iron superstructure. The top portion of the caisson served as a storage area, while the lighthouse itself was divided into five levels. The bottom three levels, which served as living quarters for the keepers, have a diameter of eighteen feet, while the watchroom has a diameter of ten feet and the hexagonal lantern room has a diameter of six feet.

Goose Rocks Lighthouse was finished on November 14, 1890, and Keeper Ira D. Trundy and his assistant Leo Gillis made the inaugural lighting a few weeks later on New Years Eve. A fifth-order Fresnel lens was initially used in the lantern room to produce a fixed red light. Ships could safely glide past Widows Island and into the thoroughfares eastern entrance by always keeping the white light visible. The intensity of the light was increased in 1902 through the installation of a fourth-order Fresnel lens, and at the same time, the characteristic of the light was changed to a flash every five seconds  a white flash in the sector and a red flash elsewhere.

A 1,200-pound fog bell, struck by machinery a single blow alternating with a double blow at intervals of twenty seconds, was established at the station on April 30, 1891. The color of the tower was changed from brown to red on September 1, 1895, and then from red to its current white daymark in 1903.

Lack of interior space resulted in the designation of Goose Rocks as a stag station. Some keepers preferred this situation, as their families were provided safe onshore housing by the Lighthouse Service and the keepers got to spend eight uninterrupted days with them each month. During a keepers absence or illness, the Lighthouse Service would send an additional keeper to fill in, such as veteran lighthouse keeper Gleason Colbeth, who joined the service in 1930.

Twenty-year-old Roy Manchester was serving as a substitute keeper at Goose Rocks in December 1940, when his boat apparently exploded while he was traveling from North Haven to the lighthouse. The next day, coastguardsmen from White Head found a charred section of his sixteen-foot boat along with some of the mail he was carrying but were unable to find any trace of Manchester. Flames had been sighted from North Haven the night Manchester disappeared.

Charles L. Knight spent three years on the lighthouse as an assistant keeper and related the following to Robert T. Sterling, author of Lighthouses of the Maine Coast and the Men Who Keep Them:

My stay at Goose Rocks was pleasant even though it was an isolated station where no one could get out and walk around on dry land. You have to get some kind of exercise and inasmuch as you have no place to run about you have to plan to go through some kind of calisthenics.

Goose Rocks was automated in 1963, and a solar-powered, 250-mm optic is now used in the lantern room. Local caretakers, including Alton Calderwood and Elmer Carver, were hired to keep an eye on the station and operate its fog bell, which remained in operation until it was replaced by a diaphragm horn in 1969.

During the 1990s when numerous lighthouses were transferred to towns and non-profit organizations under the Maine Lights Program, no group came forward to claim Goose Rocks Lighthouse. The lighthouse was again offered to qualified entities in 2004 as part of the National Historic Lighthouse Preservation Act, and this time an application was submitted by Historically Significant Structures of Philadelphia. For some reason, however, this application was rejected by the Department of the Interior through the National Park Service, though Historically Significant Structures succeeded in gaining ownership of Execution Rocks Lighthouse, when it was offered under the same program in 2007.

After the sole application was rejected, Goose Rocks Lighthouse was sold at auction by the General Services Administration. Casey Jordan and Ted Northrop submitted the winning bid of $27,000 and formed the non-profit Beacon Preservation, Inc., which assumed ownership of the property in November 2006. Ted quit his job at a Connecticut hospital and, for a time, served as North Havens on-island doctor while overseeing restoration of the lighthouse. When your neighbor asks you to move your car in Connecticut, Ted remarked, its usually because youre parking on his property. Here, its because he wants to mow my lawn!

In 2008, Beacon Preservation was awarded Penfield Reef Lighthouse under the National Historic Lighthouse Preservation Act, but this decision was reversed in 2011 after the group failed to reach a deal with the State of Connecticut for the bottomlands on which the lighthouse stands.

Goose Rocks Lighthouse has been carefully restored and is now open for overnight visitors. Fox Islands Thoroughfare is a popular passage for sailboats, and the covered deck of the lighthouse is a prime spot for viewing the majestic windjammers out of Camden and Rockland.

Located near the eastern entrance to the Fox Islands Thorofare, which passes between Vinalhaven and North Haven Islands.
Latitude: 44.13546, Longitude: -68.83059

For a larger map of Goose Rocks Lighthouse, click the lighthouse in the above map.

This light is best viewed from the water. Isle au Haut Boat Services offers a Lighthouse Tour that passes the lighthouse. Overnight stays at the lighthouse are available through Beacon Preservation.

The lighthouse is owned by Beacon Preservation, Inc., which offers tours and overnight stays.