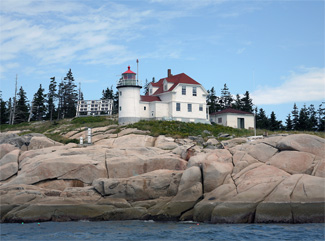 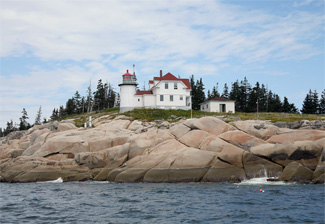 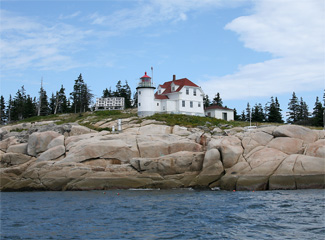 Heron Neck Lighthouse was constructed on the Heron Neck portion of Green Island to help guide mariners in Penobscot Bay to the safe confines of Carvers Harbor on Vinalhaven Island. Following a Congressional appropriation of $5,000 in August 1852, the lighthouse, consisting of a cylindrical brick tower attached to one end of a one-and-a-half-story brick keepers dwelling, was completed the following year, and a fixed red light was first exhibited from the tower on February 6, 1854. James Smith was paid an annual salary of $350 to serve as the first keeper of the light, which thanks to the lofty sand-colored granite cliff it is perched on has a focal plane of over ninety feet. The Annual Report of the Lighthouse Board for 1890 recorded that the old narrow and leaky stone deck and dilapidated lantern were replaced by an iron deck, 14 feet 6 inches in diameter, with iron railing and modern fourth-order lantern, thus putting the tower in excellent condition for many years service.

The report for the following year noted that the keepers dwelling was also in need of significant repairs. The keepers dwelling, built when the station was established in 1853, was designed to be an excellent one, having 8-inch brick walls separated by a 2-inch air space from a 4-inch brick lining and having interior 4-inch brick partitions. It is, however, understood to have been built by contract, and so little mortar was used that many of the joints do not appear to have been filled. In driving rainstorms they receive large quantities of water which keep the walls very damp and almost incessantly exudes moisture into the dwelling. The dampness of the dwelling is further increased by the character of the site, which is underlaid by a sloping ledge over which the water flows, saturating the soil surrounding the dwelling and keeping its cellar wet. From these causes the dwelling is unhealthy and it is unsuitable for occupancy in so severe a climate. It is claimed that on this account five deaths have occurred since its erection in 1853. It would cost, to remedy these radical defects in the walls and of the site, almost if not quite as much as it would to erect a new building on a proper site. A new building on a better site it is estimated would cost $3,300, and it is recommended that an appropriation of this amount be made for that purpose.

The brick dwelling was torn down and replaced with the present wooden dwelling in 1895. A stone oil house was added in 1903, and a boathouse and boat slip were added 500 feet north of the lighthouse in 1904.

Around 1940, a white sector, covering an arc of thirty-three degrees was added to the otherwise fixed red light. The original lens was a fifth-order Fresnel lens, but a fourth-order L. Sautter was installed in the lantern room in the 1900s. This lens remained in use until the station was automated in 1982, at which time a 300mm lens was installed.

On February 17, 1911, the lighthouse tender Lilac stopped at Heron Neck Lighthouse, where Captain Sterling went ashore to find the keepers widow and his son in charge of the station. Keeper Levi Farnham had just passed away the previous day.

The early keepers at Heron Neck were provided a bell that could be rung by in response to vessels signals during periods of limited visibility. This served mariners until around 1920, when a wooden pyramidal tower was erected to support a 1,200-pound fog bell and to house the machinery that struck the bell every fifteen seconds when needed. After the keepers wound up the weights that powered the striking mechanism, the bell would be tolled for about six hours.

Heron Neck is one of the few lighthouses to have been also equipped with a fog-bark. This was provided by Nemo, a Newfoundland dog that was trained by its owner, keeper Captain Levi Farnham, to bark in response to ship whistles sounding nearby on foggy nights. The Captain named the dog after the famous Captain Nemo in the Jules Verne stories.

Although he was not listed in the government lighthouse equipment rolls, and received no budget appropriation for his maintenance and upkeep, for over three years Nemo provided an important service to ships passing by Heron Neck station. Whenever the fog rolled in, Nemo understood it was time for him to go on duty, and he faithfully trotted out to the extreme end of the neck to wait and listen for ships horns.

Since sound carries well over water, and even better in a fog, the dogs sharp ears heard ships from far enough away to be able to provide them with sufficient warning. During fair weather, boats came close to shore sounding their horns, and when Nemo came running down to greet them, the captains and those aboard would throw him bits of meat and other treats as thanks for his work.

On April 19, 1989, a fire broke out in the keepers dwelling, which had been empty since the station was automated in 1982. Firefighters from Vinalhaven rushed to the scene and hauled two pumps up to the lighthouse to get seawater up the steep hill for fighting the fire. A Coast Guard vessel also arrived to fight the fire, but the flames broke through the dwellings eves, consumed the roof, and caused extensive damage before the fire could be brought under control. The light tower was saved by a Halon fire suppression system.

An investigation into the cause of the fire concluded that an electrical short in the kitchen area was the likely source. Lacking funds to restore the dwelling, the Coast Guard eventually proposed demolishing the structure. Strong public opposition to that plan sparked a discussion of alternative solutions. The Island Institute participated in this process and soon stepped in and offered to assume title to the lighthouse, auxiliary buildings, and the surrounding ten acres in exchange for restoring and maintaining the keepers dwelling.

The outcome of the debate over Heron Neck Lighthouse resulted in the preservation of the dwelling, but this success was tempered by the unnecessary deterioration that occurred during the four years that elapsed between the time of the fire and the signing of an interim lease agreement. Based on this experience, the Island Institute proposed that a streamlined process be developed for transferring en masse a large number of Maine lighthouses to deserving non-profits, educational institutions, or government entities. The result was the creation of the Maine Lights Program, which over a two-year period from 1996 to 1998 enabled the transfer of thirty-two lighthouses to owners capable of preserving the structures for the benefit of the public. This program was led the to the created of the National Historic Lighthouse Preservation Act of 2000, which has enabled the transfer of numerous lighthouses to deserving parties.

The Island Institute entered into a lease agreement with a couple chosen for their previous offshore island historical restoration experience. In exchange for a multi-year lease on the property, the couple funded the restoration on Heron Neck.

This isnt just a win-win situation, said Peter Ralston, the Island Institutes associate director. Its a win, win, win, win, win. A valuable part of Maines architectural, historic and spiritual heritage will be preserved to the highest standards, we gain a valuable research facility, public access is assured, the restoration work will provide employment to island residents and Vinalhaven will receive payments in lieu of taxes. This is all at no expense to the taxpayers and would not be happening without the help of Sen. Mitchell, the cooperation of the Coast Guard and the efforts of many, many others.

There werent quite as many wins in the agreement as initially thought, as in 2009 those responsible for restoring the lighthouse were granted full ownership and public access was terminated.

Heron Neck Lighthouse remains an active aid to navigation and was listed on the National Register of Historic Places in 1988.

Located on the southern tip of Green Island, just over two miles southwest of Vinalhaven on the larger Vinalhaven Island.
Latitude: 44.02526, Longitude: -68.86188

For a larger map of Heron Neck Lighthouse, click the lighthouse in the above map.