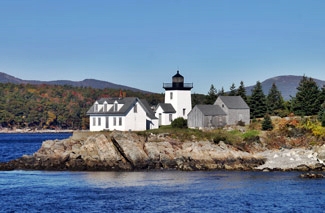 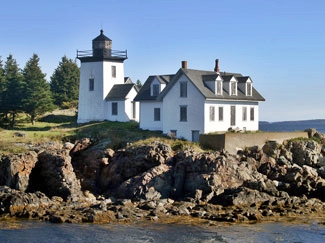 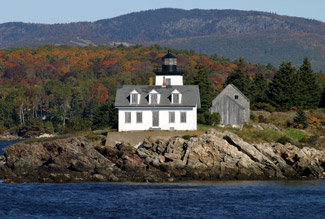 At the behest of E.K. Smart, Congress appropriated $3,500 on March 3, 1849 for a light-house at Beauchamp Point or on the opposite side of the harbor entrance at Rockport. Although the lighthouse ended up being built on seven-acre Indian Island, just off the tip of Beauchamp Point on the eastern side of the harbor, it has been known as both Indian Island Lighthouse and Beauchamp Point Lighthouse through the years. Being privately owned, Indian Island Lighthouse is not open to visitors, but the public can stay in the home of E.K. Smart, built in 1847, that is now known as Abigails Inn. According to local lore, Indian Island is so named because Native Americans used it as a rendezvous and camping place or because Captain Blaisdell drove Native American settlers of the island during the French and Indian War.

As it is important to have good and worthy persons appointed to take charge of Light Houses and especially such persons, who make no use of ardent spirits as a drink, I would respectfully recommend the appointment of said Dunning and for these reasons: He never makes use of ardent spirits as a drinkHe has been long at sea and Knows by experience the value of a good lightHe is recommended by Ship Owners and Ship Masters, and has always sustained a good reputation

Despite this favorable endorsement, the appointment was given to David Sargent, who ended up serving only about a month as keeper. Silas Piper, his replacement, had sold the plot for the lighthouse to the government for twenty-five dollars.

Indian Islands first lighthouse consisted of a brick house with a lantern mounted on its roof. In 1856, a fourth-order Fresnel lens replaced the stations multiple lamps and reflectors. In November of the following year, the Lighthouse Board recommended that the lights at Prospect Harbor, Kennebunk Pier, and Indian Island be discontinued, with the following justification being given for discontinuing the light on Indian Island: Beauchamp Point light-house is situated two miles south of Negro Island light-house, in Penobscot bay. On account of its nearness to Negro Island light-house, it is of no use to the general navigation of the bay, and it is of but little use to the village near which it is situated, the commerce of which is small. Its discontinuance is respectfully recommended.

After Congress granted the Lighthouse Service authority to discontinue from time to time such lights as may become useless by reason of mutations of commerce and changes of channels of harbors, and other causes, Indian Island Light was discontinued in 1859 along with those at Prospect Harbor and Kennebunk.

Increasing shipments of lime from Rockport provided the grounds to reestablish the station, and Congress allocated $9,000 on June 23, 1874 to restore the station to working order. Upon an examination of the premises, the Lighthouse Board noted, it was decided to renew the wood-work of the old one-and-a-half story brick dwelling, repair the walls and foundation, increase the accommodations by a frame addition 16 feet square, and erect a brick light-house tower, the light having formerly been exhibited from a lantern on the roof of the dwelling.

After the construction work was completed, the light was exhibited on January 15, 1875, under the watch of Joseph Small. Six years later, in 1881, Knott Crockett Perry, assumed the keeper duties and served until his passing in 1894. The following paragraph announced Keeper Perrys death in a local newspaper: Capt. Knott C. Perry, who died at Indian island, Rockport harbor, Monday, was a well-known Rockland mariner and commanded several vessels out of Rockland. After abandoning the sea he was stationed at the Matinicus Rock, and fourteen years ago was appointed light-keeper at Rockport. In the fourteen years he has not been absent from his light above two nights.

Over the years, various repairs and improvements were made at Indian Island, including the following: the retaining wall in front of the dwelling was repaired and a new storm porch built over the dwellings back door in 1880, a house-pump and fifteen feet of lead pipe were furnished in 1883, a 150-foot-long boat slip was added in 1885, a wood house was erected in 1888, and a stone oil house was completed in 1904. In 1902, the power of the light was increased by exchanging the fifth-order Fresnel lens for a fourth-order lens.

Foster Reed, who had formerly been stationed at Halfway Rock and the Cuckolds, served as keeper at Indian Island from 1925 to 1933. His granddaughter Barbara spent her weekends and holidays with her grandparents at the light and reminisced about her experiences there for a Lighthouse Digest article.

She recalled that the station was accessed by going to Beauchamp Point, cutting through Orchard Farm, then through some woods to the shore, where a long horn was kept to summon her grandparents on Indian Island. When Keeper Reed would hear the horn, he would row over from the island to fetch his granddaughter.

All of the furniture at the station belonged to Reed and his wife and had been transported there from the mainland. The heating system employed coal and wood that was also brought by boat. Once unloaded on the island, it had to be hauled to the house in wheelbarrows.

Unannounced inspections were performed by the Lighthouse Service, and everything, including the keepers dwelling, was held to high standards. At night, Barbara would often accompany her grandfather up the tower where the kerosene-fueled light often smoked up, requiring the glass to frequently be cleaned of soot. As the lime trade in Rockport slowed in the 1920s, Indian Island Light was considered of minimal importance and was passed over for renovation.

Barbaras grandmother baked bread, pies, and cookies. Also regularly on the menu were clams, fish, and lobsters, plus eggs and chickens, which were housed in a small outbuilding. Her grandfather also had a separate workshop.

In 1932, the Rockland Courier-Gazette printed a letter written by Foster Reed, that said the station was a quiet one without a telephone and little boat traffic in the winter. Someone goes to Rockport every day for the mail, and once in a while the Cornish or a large steamer is seen going up or down the bay. When Foster Reed retired from the Lighthouse Service in 1933, he and his wife, Celia, moved to nearby Camden.

Barbara graduated from Camden High School in 1940. She visited her grandfather on graduation day, and later that night, Foster Reed passed away, his job of helping raise his granddaughter to adulthood complete.

The year after the Reeds left Indian Island, its light was discontinued, and the lighthouse was declared surplus and sold at auction for $1,025 to William L. Pattison of Chicago in September 1934. The island and lighthouse have remained in the same family ever since. An automated light was established on Lowell Rock, just off Indian Island, in 1949.

For a larger map of Indian Island Lighthouse, click the lighthouse in the above map.

Indian Island Lighthouse is best seen from the water, but glimpses of it can be had from various spots along the shore near Rockport. Boats out of Camden harbor may provide an opportunity to get a good view of the lighthouse. One that definitely does is Camden Harbor Cruises.


Indian Island Lighthouse can be seen in the 2001 movie "In the Bedroom."