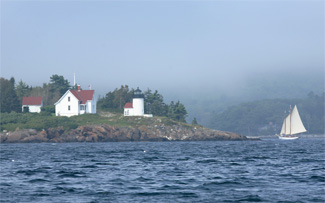 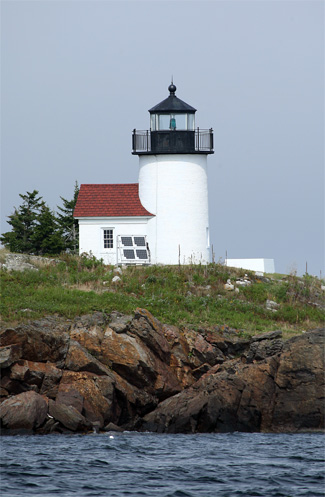 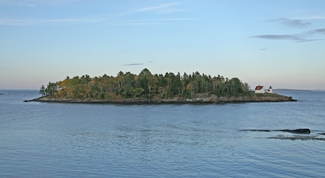 The Camden area was already inhabited by Native Americans, who called the area Megunticook (meaning great sea swells), when European settlers moved there. The first of these to arrive was James Richards, who sailed with his family from New Hampshire and entered Camden Harbor on May 8, 1769. According to an 1858 book on Camden history, the African cook for the Richards family pointed to the rocky seven-acre island with spruce trees and grass at the harbors entrance and pronounced it his island. The islet was subsequently known as Negro Island until it was renamed Curtis Island in 1934, for Cyrus Curtis, a summer resident of Camden and publishing magnate well known for his philanthropy. In 1791, when the population of Camden reached 331, residents decided to incorporate and set up a government, becoming the seventy-second town in what would later become Maine. With the increasing population came a thriving shipyard and a wharf for the steamships puffing their way between Boston and Bangor. Camden Harbor, considered by many to be the most beautiful spot in Maine, is protected by tiny Curtis Island. When gales blow, waves lash the island, but its ledges act as a breakwater built by Mother Nature to keep the harbor safe.

In 1834, Congress appropriated $4,500 for building a lighthouse on a proper site on Negro Island. George Galt completed the lighthouse in 1836, on land purchased from John Dorr of Boston for $400. The first keeper was Henry K.M. Bowers.

Galt built a rubblestone tower, which measured twenty feet to its lantern deck, and a two-story stone dwelling that contained three rooms on the first floor and three smaller rooms upstairs. The lighthouse used eight oil lamps with fourteen-inch reflectors, which cost $650, to produce a fixed white light. To supplement his income, Keeper Bowers kept a garden and animals, including cows, ducks, and chickens, at the station. He was also allowed to cut trees for firewood.

The Boston-Bangor Steamships used Negro Island as a signal station for a number of years. The lighthouse keeper would raise a ball on a pole near the tower to indicate that a ship from one direction or the other was on its way. As villagers noted the ball, a cry could be heard throughout Camden, The ball is up!, and all with an interest in the ships arrival would start out for the wharf. Also tied to the steamships was a summertime sport. Those who wanted to prove their oarsmanship would place their rowboats in line with the wake from the great vessels to test their skills.

Negro Island Lighthouse was found to be in very good order when Lt. Thomas Manning came for an inspection in 1838. However, when engineer I.W.P. Lewis visited in 1842, he found that the tower had been cracked from top to bottom by a gale in February of that year. Although the octagonal lantern had been repaired, the tower itself still leaked. As a stopgap measure, the tower was sheathed in wood and shingled in 1855.

Ephraim S. Fly, keeper from 1841 to 1845, was very unhappy with the stations useless rainwater cisterns that forced him to row ashore for water and construct a landing wharf on the island using twenty-five dollars of his own money. Obadiah Brown followed as keeper in 1845, Captain William Prince in 1849, and then came Ebenezer M. Carlton, who resigned in 1855 after two years at the light. Obadiah Brown was reappointed in 1855, and following his death in 1857, a newspaper reported, Mr. Brown in building wall upon the island injured his stomach which resulted in his death. Brown, who was said to be universally respected, was succeeded by Andrew M. Innis.

In 1856, the lighthouse received a new and improved reflecting apparatus  designed to serve until [a] suitable lens apparatus [could] be procured for a final refitment. A fourth-order Fresnel lens was installed later that year. During 1867-1868, the keepers house was extensively repaired and a woodshed was added. Storm-houses were constructed over the front and back doors of the dwelling; a new cast-iron sink, pump, and pipe were put in; and the privy was moved to the rear of the dwelling and a plank walk laid to it. A fifty-foot-long and five-and-a-half-foot-wide covered walkway, linking the residence and tower, was added in 1876.

In 1889, while Henry Wiley was keeper, the dilapidated old dwelling, built of rubble masonry in 1835, was replaced by a framed house on the same foundation. Also that year, a new barn, a boat-house, and a boat-slip were built. A local newspaper wrote that the house is in a modern and pleasing style of architecture and very convenient. It contains six large, airy, well lighted rooms, beside numerous closets, halls &c. Every floor in the house is of hard pine and the whole house is built in the most thorough manner and of the best materials. The station also received a new barn, boathouse, and boatslip along with the new dwelling.

An oil house was added to the station in 1894, and next it was time for a new tower. On May 11, 1896, the lantern from the rubblestone tower was mounted on a temporary tower, forty feet to the east, and the old lighthouse was subsequently demolished to make room for its successor. On July 30, the new cylindrical brick tower, twenty-five-feet in height, was completed, and with the paint still drying, its light was lit. Henry Wiley was still serving as keeper, but passed away the following September, just two days after a 1,000-lb. fog bell and materials for a bell tower arrived on the island. This bell wasnt the islands first. Since 1882, keepers had been required to repeatedly strike a small bell by hand during foggy weather, and this task continued with the new bell, as it too lacked a mechanical ringer. An electric ringer was finally added to the bell around 1935. A brick cistern was built in the dwelling in 1901.

In 1897, Louise Gilley, a fourteen-year-old daughter of Keeper Howard Gilley, proved herself a hero. Two small boys were rowing near Curtis Island when they capsized. Hearing their frightened screams, Louise rushed to the water and without a moments hesitation set off in a rowboat to help them. As she was unable to lift them into the boat, Louise told them to hold on to its sides while she paddled back to the island.

Keeper Francis McCarthy performed a different sort of rescue in 1962, when an Air Force T33 jet ran out of fuel and crashed in Penobscot Bay. McCarthy plucked the planes thirty-one-year-old pilot from the choppy waters near the island, and a search was initiated for another crewman who had bailed out farther out at sea. An expected plane had passed over Curtis Island two years earlier and dropped gifts, including a doll for nineteen-month-old Kathy McCarthy. Christmas of 1960 was the twenty-fifth year that Edward Rowe Snow had assumed the role of Flying Santa for New Englands lighthouse keeper. To show their appreciation, the McCarthys had used bricks and rocks to spell out Hi, Santa. Merry Christmas, in ten-foot-tall letters on the island.

In 1970, Camden residents convinced the Coast Guard that the light station should be turned over to the town rather than being auctioned to a private individual. The town took responsibility for the island and all its buildings save the tower in 1972, designated Curtis Island a park, and later hired a caretaker to look after the station. In a vote of 1,358 for and 137 against, the town of Camden agreed to accept ownership of the tower on Curtis Island in November 1997 under the Maine Lights Program.

On Memorial Day weekend 2000, a fog bell, on long-term loan from the US Coast Guard, was dedicated to the men and women who had served at Curtis Island Lighthouse. As the fog bell had not been used on Curtis Island, some thought it should be returned to the Coast Guard. Determined volunteers pushed the project through, and the public can now visit the memorial near the public parking lot at Camden Harbor.

Garrett Elliott Connie Conover, Jr. starting serving as caretaker on Curtis Island along with his wife Deedee in 1980. Despite his failing health toward the end of his service, Connie planned a community volunteer project to scrape, prime, and repaint the keepers house. After seeing the project through, Connie passed away in 2010 at the age of eighty-one.

Curtis Island Lighthouse, one of the most picturesque stations in Maine, is difficult to see from shore. The best views come from excursions and schooners out of Camden Harbor.

For a larger map of Curtis Island Lighthouse, click the lighthouse in the above map.

Curtis Island Lighthouse is best seen from the water, but a distant view is possible by taking Bay View Street east from Highway 1 in downtown Camden. Continue until Bay View intersects Beacon Avenue, where there should be a sign affixed to a tree that reads Curtis Island Lighthouse Viewpoint. Park and take the well-worn trail to the shore and a bench.

The lighthouse is owned by the Town of Camden. Grounds open, dwelling/tower closed.