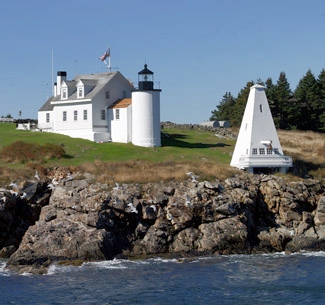 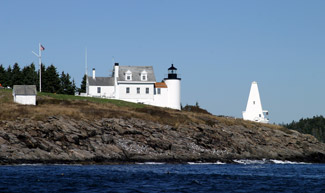 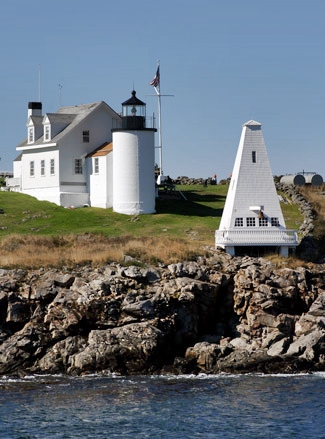 It has often been said that this or that lighthouse is as pretty as a picture, but Tenants Harbor Lighthouse overlooking Penobscot Bay truly is. Its like living in an Andrew Wyeth painting, says Jamie Wyeth, current owner of the lighthouse and part of the Wyeth dynasty of beloved American artists.

Tenants Harbor is one of only fifteen (as of 2016) privately owned lighthouses in Maine. Following the decommissioning of the lighthouse in 1934, it was sold at auction to a Rockland resident. In 1978, Andrew and Betsy Wyeth purchased the lighthouse from Walter Whitehead, who had owned it since 1953. Andrew Wyeth located his studio inside the base of the bell tower and featured the station prominently in several paintings, including Easterly, Signal Flags, and Fog Bell. In 1990, Andrews son Jamie Wyeth moved to the island and also depicted the light in such paintings as Lighthouse Dandelions, Gaggle, Pumpkinhead Visits the Lighthouse, Southern Island Sunset, and Iris at Sea (of which 300 signed prints were sold to benefit the Maine Lights Program).

Located on twenty-two-acre Southern Island at the entrance to Tenants Harbor, the lighthouse was erected in 1857 and is sometimes called Southern Island Lighthouse. As early as 1838, mariners proposed that a light be built there, but it was not until 1854 that the local granite and fishing trade finally prompted the government to take action and provide $4,500 for a lighthouse. The reasons for not establishing a light here earlier were that there were but six houses in the harbor, and a new lighthouse might have been confused with Whitehead Lighthouse, two miles to the northeast, or Marshall Point Lighthouse, five miles to the southwest.

Tenants Harbor is one of several villages that comprise the Town of St. George. The village was likely named for a local settler, and the spelling of its names has changed over the years, including such variants as Tarrents, Tarance, Terrance, and Tennants.

A one-acre parcel and right-of-way on Southern Island were purchased in 1855, and in 1857. a twenty-seven-foot-tall, brick tower, attached to a five-room, wooden keepers dwelling by a service room, was completed. The cylindrical tower had a diameter of eleven feet and was topped by an octagonal lantern, housing a fourth-order Fresnel lens that produced a red flash that could be seen for thirteen nautical miles. The light was first lit on January 1, 1858.

A fifth-order, Henry-Lepaute lens had been installed in the tower by 1863, changing the lights signature to fixed red varied by a red flash each minute. Two flash panels, powered by a clockwork mechanism that required winding every seven-and-a-half hours, revolved around the outside of the fixed lens to produce the flashes.

Levi Smalley of St. George was the first keeper to live in the little red house (with his wife Lucy and daughter Sarah) and care for the light in the white tower with its red lantern and ventilator ball. Smalley was followed in 1861 by Ebenezer Farnham, a master mariner, who in turn was succeeded in 1865 by his son, John A. Farnham, a blacksmith. Keeper John A. Farnham was removed in 1872 for negligence after Lighthouse Inspector W.K. Mayo wrote, The condition of his charge is faulty and he is quite lazy and disobedient to the Rules, etc.

The color of the dwelling was listed as brown instead of red in 1870, and by 1879, its color had changed to white to match the tower. In 1880, a boathouse, measuring twelve by twenty feet, was added to the station, followed by a 100-foot-long boat slip in 1882. The summer kitchen attached to the dwelling was plastered in 1887 and a small shed was constructed adjoining it. A fuel house was built in 1895, and an oil house in 1906, after the light was converted to kerosene.

The stations hand bell, which had been rung in answer to vessels signals since around 1884, was replaced in 1908 by a 1,1048-pound bell suspended from a pyramidal wooden bell tower. The striking machinery, manufactured in the lighthouse machine shop in Boston, repeatedly tolled the bell in the following manner: a single blow, thirty seconds of silence, a double blow, thirty seconds of silence.

In 1892, Thaddeus A. Wallace transferred to Southern Island from Matinicus Rock Lighthouse, where he had worked his way up from third assistant to first assistant in four years. Following Thaddeus death in September 1898, Ellen, his wife, assumed his duties until Joseph Jellison arrived from Whitehead Lighthouse. Jellison had been assistant keeper there for two years under his brother Frank.

Keeper Jellisons efforts in helping mariners in need were noted on a couple of occasions. In 1915, Jellison towed two disabled boats to their moorings, and in 1918, he towed another disabled boat to safe anchorage through strong winds and rough seas.

Keeper Jellison was succeeded by Willie Corbett, who served from 1920 to 1923. Even years later, Willies son Myron remembered well the back-breaking work involved in the coal deliveries to Tenants Harbor Lighthouse. Heavy burlap bags full of 200 or more pounds of coal were loaded from the supply ships into launches, which were then rowed to the boat slip and offloaded.

A couple of men doing the placing upon one individuals back and shoulders placed it upon him evenly, and as soon as he was on his way another took his place, knee deep or more in swirling surf, and hip boots pulled all the way up, Myron said. At some point, with both Southern Island and Little River the same in this respect, the bags were dumped out onto the ground close to the boathouse. As the bags were dumped they were carried back to the launch, with the empties representing ten bags to the ton, and with each station receiving from 8 to 9 tons.

Myron related that it was with somewhat mixed emotion that the keeper received the coal, because after it was offloaded at the boathouse, it was then up to him and his family to move it to the storehouse before it could be burned and its warmth enjoyed.

It was natural for all family members to help at the light station. June, daughter of Leonard Bosworth Dudley, the last keeper at Tenants Harbor who served from 1923 to 1933, would help her father by tending the light and keeping the lantern room glass clean. She also looked after the familys chickens and cows. A boat had to shuttle her to the mainland to attend school or to go shopping.

Along with a few other lighthouses, Tenants Harbor was discontinued and surplussed in 1934. A lighted bell buoy costing $5,869 was established offshore in its place, and the lighthouse was sold. Local rumor has it that during WWII a German submarine surfaced nearby, and its occupants left behind cigarette butts, newspapers, and other items on Southern Island

For a larger map of Tenants Harbor Lighthouse, click the lighthouse in the above map.

This light is best viewed from the water. You can just get a peek of the light from the shore near Tenants Harbor. To reach Tenants Harbor, from Highway 1 east of Thomason, turn south on Highway 131 and proceed south for roughly ten miles to Tenants Harbor.

The lighthouse is owned by Jamie Wyeth, an artist. Grounds/dwelling/tower closed.