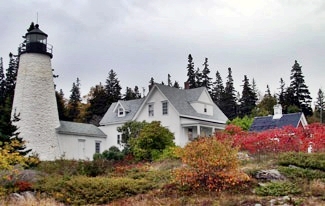 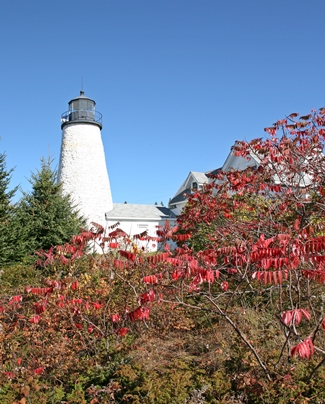 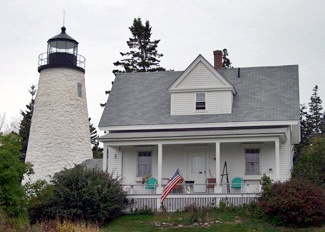 Castine, Maine, home to Dice Head Lighthouse, is a quintessential New England village with lofty elms shading streets lined with immaculate mid-nineteenth century homes. While some towns boast a few buildings on the National Register of Historic Places, the entire town of Castine made the register. Located on a peninsula on the east side of the entrance to Penobscot River, sixteen miles off the bustling tourist route, Castine is great for a relaxing escape, and its lighthouse seems to have enjoyed a rather tranquil existence in this peaceful setting. According to one Castine Historical Society writer: Shipwrecks and heroic rescues performed by lighthouse keepers, their families, and even their dogs have no part in the stories surrounding Dices Head Lighthouse.

Castine was settled in 1613 by French, Dutch and British settlers; and during the American Revolution, the town embraced the arrival of British soldiers. Originally part of Pentagoet, it incorporated as Castine in 1796, taking the name of the rich, adventurous Baron de St. Castine, who married the daughter of the Indian Chief Sagamore Madocawando. Some say the Barons spirit  a blue-eyed specter wearing deerskins with a feather in his headband  still roams the area even though he returned to France and died there.

By the mid-1800s, Castine was the nations second most prosperous town per capita thanks to its six shipyards and shipping trade. The sum of $5,000 was appropriated on May 23, 1828 to finance a conical rubblestone lighthouse to guide vessels along the Penobscot River and into the harbor at Castine. The Dyce family formerly owned the site selected for the lighthouse, and while the lighthouse has been known as both Dyce Head and Dice Head, the latter is now more common. The tower, measuring forty-two feet from base to focal plane, was topped by an octagonal wrought iron lantern and stood next to a one-and-a-half-story rubblestone house. The towers light, produced by ten lamps in fourteen-inch reflectors, was first lit on November 5, 1828.

Jacob Sherburne, a former ship captain, served as the first keeper. In 1831, he requested a raise and received the following refusal from Collector Chandler:

If it is believed that the Salary of all the Keepers are too low, then the one at Dices Head is too low of course; but that Light is on the main land near a very respectable village, altho it is over rather rough ground to get to it. But I should think that all those on Islands better entitled to an increase of salary than the one at Dices Head; and there are some of those on Islands that are not very well paidparticularly Mount Desert Rock, Matinicus Rock, Moose Peake and Petit Menan. I cannot therefore recommend the raising the salary at Dices Head, unless all are, on the coast of Maine, (with two or three exceptions) raised.

In 1835, Captain Henry D. Hunter of the US revenue cutter Jackson inspected Dice Head Lighthouse and recommended that the light be moved: This light should be located on the northern head of Holbrook Island, at the eastern entrance to Castine Harbor. It would then answer as a guide up the Penobscot River and a harbor light. I.W.P. Lewis also took issue with the location of the light after visiting the station in 1842: As a harbor light for the port of Castine, this is useful. As a bay light, it is of little utility, though standing at the head of Penobscot bay; yet the site is so far east of the central line of said bay, that the light is intercepted by projecting land, and can only be seen in a certain direction and limited distance. Were it placed at the west side of Dices head, it would then have a clear range down the bay to its limit of visibility.

When Benjamin Harriman started as keeper in July 1841, his annual salary was $350. As part of Lewis1842 inspection report, Keeper Harriman noted that all water had to be carried 1,000 feet, the walls of the tower and dwelling were cracked and leaky walls, woodwork was rotten, and the towers stairway unsafe. Because there was no cultivatable land at the station, nearby land had been provided for the keeper to grow food and keep animals, however, its use was then granted to someone else in the village. An 1850 inspection found the station still leaky, but Harriman was praised for keeping the lighting apparatus clean. Only in 1887 was a water cistern built; then in 1906, the dwelling was connected to the municipal water supply.

The reconstruction of Dice Head Lighthouse was recommended in 1857, but instead in 1858 the tower, with its cracked walls and rotten woodwork, was covered with wooden siding, and a new fourth-order Fresnel lens was installed in the lantern room. Sometime before 1870, a frame dwelling was built to replace the stations original stone dwelling.

A 1,000-pound fog bell was hung near the lantern room deck at Dice Head in 1891 and was to be rung by hand in answer to the signals of nearby vessels. A brick oil house was constructed near the tower in 1895. The wooden sheathing on the tower was removed at some point after 1891.

When Edward T. Spurling was appointed keeper at Dice Head in 1911, his daughter Bea, age 11, was able to walk to school and attend classes with other children for the first time. Until that time, his assignments had been at the remote Avery Rock and Franklin Island lights.

One night around Christmas 1929, Captain William H. Wincapaw, an experienced pilot, was carrying a load of presents in a small floatplane when he was blown far off course in a blinding snowstorm. He was disoriented, low on fuel, and his instruments had malfunctioned. Beneath him was the ocean. Though outwardly calm, inside he was frightened and began to despair that he would be unable to find his way home, when suddenly the beam from Dice Head Lighthouse split the darkness. That beacon and the ones he soon spotted helped guide him home.

A few days later Wincapaw set out on a mission to show his gratitude by dropping small presents containing cookies, the Farmers Almanac, tea and coffee for the lighthouse keepers and their families. In those days, some lights were quite isolated, without modern conveniences, and those small gifts were so well received that the Flying Santa tradition was born. It expanded and continues, having been taken up by many others over the years with presents now delivered by helicopter.

On July 23, 1931, Vurney L. King, the last keeper of Dice Head Lighthouse, rescued a woman who was marooned on a rock after the tide came up. The woman was unable to swim and had been perched on the rock for five or six hours before being removed by Keeper King. Dice Head Light was electrified and automated by 1935, but Keeper King and his wife Maude continued to live at the station as caretakers through at least 1940.

After Dice Head Lighthouse was decommissioned in 1937, the light was moved to a nearby skeletal tower, and the keepers dwelling and surrounding land was transferred to the town of Castine. The tower was turned over to the town in 1956.

The automated light on Dice Head was described in the 1949 Light List as a white skeleton tower, rebuilt in 1937, situated on the north side of the entrance to Castine Harbor. The 200-candlepower, flashing, 300-millimeter acetylene light shone twenty-seven feet above the water and was visible for nine miles.

In 1997, the citizens of Castine approved the expenditure of $98,000 to repair the aging tower, which had lost chunks of mortar over the years. This amount was pooled with another $25,000 allocated by the town the following year and $52,000 contributed by the Maine Historic Preservation Commission to hire Marty Nally of the Campbell Construction Group to repair the tower. Nally injected slurry into the tower to strengthen it.

Castine rents the keepers dwelling to help offset the cost of maintaining the property, and for over thirty years it was home to artist Nancy Carr. In 1999, a chimney fire, fought by more than fifty firemen from three communities, almost entirely claimed the keepers house. During the firefighting efforts, the towns 100-year-old fire hydrants failed, and the house suffered more than needed. The newly repaired tower, however, escaped damage. Rather than rebuild the house from scratch, the town voted to repair the dwelling, retaining as much of the original structure as possible. Philbrook and Spinney were contracted for the work, which was carried out during the first nine months of 2000.

For a larger map of Dice Head Lighthouse, click the lighthouse in the above map.

From Highway 1 near Orland, turn south on Highway 175 and drive south for eight miles to West Penobscot. From there, continue south on Highway 166 for roughly seven miles to Castine. In Castine, follow Battle Avenue past the Maine Maritime Academy to its end. The keepers house is a private residence, but there is a public path, which leads to a viewing area.

The lighthouse is owned by the Town of Castine, and the dwelling is rented to a caretaker. Grounds open, dwelling/tower closed.