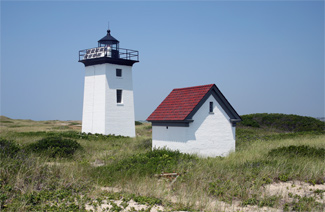 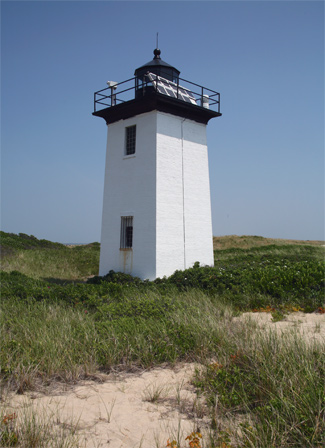 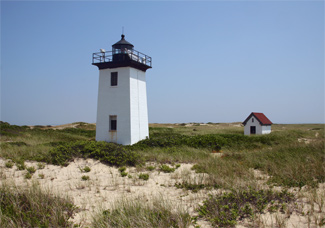 Were it not for the danger of shipwreck, probably few, if any, lighthouses would have been constructed. Thus, it is not surprising that the November 1871 sinking of the schooner William H. Atwood with the loss of all aboard contributed to the erection of a lighthouse at Wood End, the southernmost point on the sandy hook that forms Provincetown Harbor.

A white, pyramidal day beacon constructed there in 1864 helped mariners but certainly did not bring an end to wrecks in the area.

Despite three light stations near Provincetown (Race Point, Long Point, and Wood End), there still have been over fifty shipwrecks since 1875. While 1899, when a sloop and two schooners came ashore and broke up, is considered by many to be historys worst year for accidents, others consider it to have been 1927.

Around 3:30 p.m. on December 17, 1927, Provincetown Harbors most tragic maritime disaster occurredone that nearby Wood End Lighthouse could not prevent. The U.S. Navy destroyer Paulding, on loan to the Coast Guard to help search for Prohibition booze runners, was unaware that the submarine S-4 was on maneuvers off the cape, when it rammed the surfacing S-4 and tore holes in its starboard side. The forty men aboard the sub were thrown about by the impact but scrambled to reach watertight compartments as the submarine quickly settled to the bottom in 110 feet of water. The thirty-four men in the aft part of the submarine soon succumbed to a combination of chlorine gas and a lack of oxygen, but six men in a forward torpedo room patiently waited for rescue in the cold, dark sub.

At great personal peril, Navy divers reached the S-4 the day following the collision and communicated with the six trapped men, who tapped out in Morse code: Is there hope? Please hurry, please! Foul weather, however, frustrated the rescue effort. Despite knowing that the men had only seventy-two hours to live with their current oxygen supply, all were forced to wait until the foul, icy weather broke. The divers tried to attach oxygen hoses to the S-4, but they were repeatedly torn lose by the sea. The last message tapped out by the doomed men was: We understand....

Throughout the attempts to rescue the submariners and raise the submarine, the men of the Provincetown fleet and fishing boats came out in the storms to assist in any way they could.

Eighteen days after the accident, the navy finally raised the S-4. Found among Radioman Walter Bishops personal effects was a poem describing the pigboats: In the cantankerous mind of the devil, There festered a fiendish scheme, He called his cohorts together, And they designed the submarine.

The history of Wood End Lighthouse began on June 10, 1872, when Congress appropriated $15,000 for its construction. Wood End lies between Race Point and Long Point, along the sandy curl that forms Provincetown harbor and has been described as the fingers of a semi-closed right hand. The new light first shone through its fifth-order Fresnel lens on November 20, 1872, after being lit by Keeper Thomas Lowe, who served at the station for the next twenty-five years. Wood End Lighthouse exhibited a red light, which flashed every fifteen seconds and could be seen eleven nautical miles in good weather.

Wood End had a square, pyramidal, brick tower, painted brown, while the exterior of the lantern, railing, deck, and ironwork were all painted black. The lights focal plane was thirty-four feet above ground and forty-five feet above sea level. A one-and-a-half-story, cream-colored, wooden keepers house sat fifty feet northeast of the light tower.

Between Long Point and Wood End lights there was a salt works and a fish oil works, and the keepers of both lights complained to the Lighthouse Board about the stench and flies associated with those establishments.

When a Boston Globe reporter visited Wood End in 1889, Keeper Lowe demonstrated how the clockwork mechanism turned the lens, then he lit the lamp, and the pair retired to the cozy sitting room in the dwelling, where Lowe recounted his life before becoming keeper.

As a boy, Lowe shipped out on a fishing schooner from Wellfleet, then later joined the navy and saw action in the Mexican War aboard the frigate Ohio. While having mixed success as a California Gold Rush 49er at Sutters Mill, Lowe helped rescue some snowbound settlers then tried his hand at farming in Southern California, before joining the crew of a clipper ship. Poor health eventually forced him ashore, where he decided to become a light keeper. His first assignment was in 1868 as an assistant at Cape Cod Lighthouse, and then he was in charge of that light for two years before being transferred to Wood End.

The areas numerous shipwrecks sometimes required Lowe to wake nearby residents to assist with rescues. A lifesaving station was established at Race Point in 1892, and another added at Wood End in 1896, not far from the lighthouse.

Philip R. Smith replaced Thomas Lowe as keeper in 1897 and was evidently a very fastidious keeper. From 1912 to at least 1920, Keeper Smith was awarded the efficiency pennant, which was given to the station in each district receiving the highest mark for general efficiency. This pennant could be flown at the station but never above or on the same staff as the national colors.

A lighting experiment was carried out at Wood End in 1916 as noted in the Lighthouse Service Bulletin:

In January, 1916, the installation of a 35 mm, type B, single-tank, incandescent oil vapor lamp in the eight panel fifth-order revolving lens at Wood End Light Station, Mass., was recommended, but as this lamp had never been used in any but a fourth-order lens it was thought that a fifth-order lens was too small and would not stand the heat. It had been noted, however, that the heat from an incandescent oil vapor lamp rises almost perpendicularly from the top spreading out in a cone with an angle of about 10 or 15 degrees, hence it appeared possible to place a metal deflector in the top of the lens so that it would carry off the heat and protect the prisms from cracking. An installation of this kind was made on August 17, 1916, and a six-months test just completed shows that it is giving satisfaction. The candlepower is estimated at 2,500 for a red light.

A stone breakwater was built across the upper end of the harbor in 1911, so that at low tide one could cross from Provincetown directly to the light, instead of slogging all the way round the end of harbor through miles of sand.

Taking the long way around the harbor would have been a welcome escape for Keeper Douglas H. Shepherd when he was trapped at the light for weeks during a severe ice storm in February 1935. The Boston Globe reported:

Keeper Douglas H. Shepherd of the lonely Wood End Light, on the far-off shore opposite this town, has been ice-bound and imprisoned at his station the past two weeks. He depends upon the Coast Guard to ferry his supplies and mail across the harbor, since it is impossible for him to come into town in his car, owing to the miniature icebergs piled all along his routeKeeper Shepherd has struggled vainly to break through the arctic expanse that extends for miles beyond his light. Several times he has attempted it, using axe and crowbar to attack the ice blocks in his path, but each time he has been forced to turn back.

In October 1930, the stations water supply ran out, and State Forester Lincoln Crowell ran 6,2000 feet of hose from a hydrant in Provincetown out to the lighthouse. The water was allowed to run for forty hours to replenish the supply.

During part of 1937, James Hinkley Dobbins was a relief keeper at Wood End. His wife Ruby and daughter Harriet did not live at the station and probably were not keen to do so. Before her first visit to the lighthouse, James instructed Ruby to buy all the mousetraps in stock at the local hardware store, as the keepers house was infested with rodents.

In 1961, the lighthouse was automated with a modern aerobeacon being installed in the towers lantern room. No longer necessary, the keepers house and storage shed were torn down. Rather than rely on a generator to power the beacon, a power line was strung to the station. Solar panels were installed in 1981, making Wood End one of the first solar-powered lights in the country.

For a larger map of Wood End Lighthouse, click the lighthouse in the above map.

You can view this lighthouse from Commercial Street in Provincetown at the foot of the breakwater, which leads to the lighthouse, but the views are distant. To reach the lighthouse, you can walk the 1/2 mile breakwater, and then trudge another 1/2 mile through sand. Another option would be to rent a kayak and paddle to the light, but a hike through the sand is still required. Flyer's Boat Rental offers kayak rentals and also a shuttle to Long Point Lighthouse, which is 1.5 miles from Wood End Lighthouse.

The lighthouse is owned by the Coast Guard but maintained by the American Lighthouse Foundation. Grounds open, tower closed.


We almost met Our End getting to this lighthouse. We took a shuttle out to Long Point, and then walked to Wood End Light. The distance between the lights is just 1.5 miles, but trudging through soft sand in 98 degree heat and high humidity can take its toll. On the return trip to Long Point to meet the shuttle, frequent stops were necessary as was a dip in the water to try to cool ourselves. Try not to make the hike on the hottest day of the summer if at all possible.