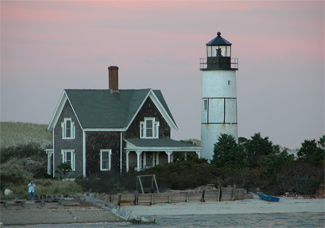 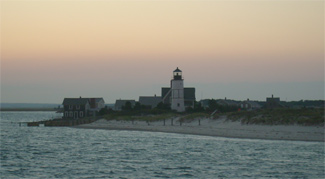 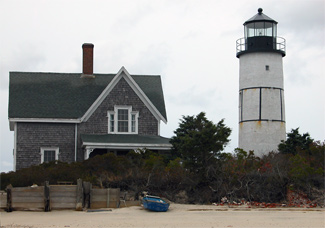 After Sandy Neck Lighthouse stood headless for nearly seventy-five years in spoiled beauty, volunteers were finally spurred to restore the lighthouse to its former glory. Looking now at the charm of this lighthouse flanked by its six-room keepers house and situated on the low, eastern point of Sandy Neck at the entrance to Barnstable Harbor, it is easy to forget the sacrifices of the men and two women (and their families) who tended this light during its century of service. Sandy Neck comes by its name honestly, with shifting sands constantly redefining the margins of this thin, one-half-mile-wide, six-mile-long peninsula on the north side of Cape Cod. In the nineteenth century, Barnstable was an important port for fishing, whaling, and coastal trade, and Sandy Neck was home to a try-works for rendering whale blubber into oil.

On May 18, 1826, Congress approved $3,500 for a lighthouse on Sandy Necks eastern extremity, known as Beach Point. In a show of support, the town of Barnstable sold a two-acre parcel for the light for only one dollar. On October 1, 1826, Sandy Neck Lighthouse, which cost in total $2,911.25, went into service. Joseph Nickerson, its first keeper, earned $350 per year and remained at the light for seven years.

The initial light was shown from a sixteen-foot-tall wooden tower rising from the center of a brick keepers dwelling. Powered by ten lamps with fourteen-and-a-half-inch reflectors arranged in two tiers, the 180-candlepower, fixed white light beamed forty feet above mean high water and was visible for nine nautical miles. A report in 1838 recommended the suppression of the four lamps in the upper tier to conserve fuel.

Lighthouse Service inspection reports and keeper logs are key to understanding a lights history. In December 1833, when Henry Baxter replaced Nickerson as keeper, he marked his first day by noting in the lighthouse logbook: This day moved my famerly [sic] and took possession of the lighthouse at Beach Point, Sandineck. Wind NE. Thick weather.

Many Massachusetts lighthouses were plagued by storms, ice, and erosion, and Sandy Neck Lighthouse was no exception. On December 15, 1834, Henry Baxter wrote: This day a heavy gale from the SW with snow. Came on shore the schooner Enterprise and Capt. Sawyer with two women on board. Got them on shore with much trouble. Capt. Sawyer much frost bit. So ends very cold and the ice making fast the schooner, laying in the barr [sic] with much ice on her and sails much torn. Another storm in October 1837 swept away six feet of land from the stations east side.

In 1838, Lieutenant Edward W. Carpender reported that the premises were in good shape, but believed the tower and dwelling should be independent structures because if fire struck one, both would be destroyed. In 1842, Engineer I.W.P. Lewis inspection noted that the lighting apparatus, which had been reduced to six lamps, was worn out and dirty and adjudged the lighthouse to be another specimen of contract work where the Government had been losers by the operation; the whole construction and materials being equally defective. At the time of Lewis visit, workmen were building a timber bulkhead to check the inroads the sea was making on the lighthouse property. Lewis noted that a long and dangerous bar extending from the point was responsible for the loss of many lives, and he recommended that it be marked by a screwpile beacon.

Many professions were family affairs and this was often the case in lightkeeping. In 1844, James Baxter, Harrys son, would take over as keeper. Following him from 1846-1862 was Thomas P.D. Baxter. Author and historian Edward Rowe Snow wrote that Thomas Baxters grandson, Harry Ryder, said his grandfather had frequent visitors at the light as the packet boat transporting passengers, freight, and mail between Boston and Provincetown often stopped at the station.

An 1850 inspection noted that the height of the lantern had been increased by eight to ten feet and a new system of seven lamps with fourteen-inch reflectors had been installed. In 1857, the present forty-eight-foot-tall, circular, brick tower was constructed just north of the original dwelling.

The ice that frequently plagued the harbor would also claim Keeper Thomas Baxters life. Traveling in his dory to Barnstable in 1862 through the icy harbor required rowing, pulling, and pushing the boat by turns. At one point, Baxters leg was crushed between the dory and the ice, leading to a case of gangrene that would ultimately kill him.

His wife, Lucy Hinckley Baxter, mother of three and grandmother of Harry Ryder, officially assumed her husbands duties. Ryder told Edward Snow, The picture she often described to us of her having to heat the whale oil in the winter months behind the kitchen stove and carry two oil butts up into the tower at midnight is one we never forgot.

Lucy resigned in 1867, moving to Barnstable to make it easier for her children to go to school. Traversing the harbor that took her husbands life would have been miserable for the children in winter and a good reason in itself to move, but not having to haul all that oil must have made the decision somewhat easier for Lucy. In time, she would marry a Yarmouth man.

In 1875, the ice became almost impassable from late January to the middle of March. It snared a number of schooners and vessels, and several trapped crews made their way to the light. That year Jacob S. Howes assumed the role of keeper. After his death in 1880, Sandy Necks second widow took over, Eunice Crowell Howes, who stayed on until 1886. Also in 1880, the keepers house was reported as beyond repair, and it was soon replaced by the present frame structure.

In 1887, two iron hoops and six vertical staves were set in place around the center portion of the badly cracked tower to strengthen it and prevent further decay. Those hoops and staves remain and have lent Sandy Neck Lighthouse its unique appearance.

Despite all the hardship at Sandy Neck, there were lighter moments as well. When Keeper George A. Jamieson and his family had their chicken coop and all forty chickens disappear during a fierce storm in December 1898, they were certain the chickens had met their death in the raging surf. They were quite relieved to learn that their intact coop full of seasick chickens had washed up in Barnstable.

Keeper Jamiesons daughter, Mrs. Kenneth Rouillard, described her birth at the lighthouse in a 1974 interview. Her father was in the harbor returning with supplies from the mainland when he saw a blanket suspended from the tower and turned around to bring the doctor. Of course, there were no telephones, so whenever he went ashore they had worked out the blanket signal, Mrs. Rouillard explained. By the time he did get back with the doctor, however, I had already entered the world.

The children were schooled at home by Mr. Ferguson, a teacher who roomed at the light during the school year. A small workroom attached to the tower became a makeshift classroom. We had three school desks, one for me and one each for brother and sister. There was a spiral staircase up to the light and Mr. Ferguson had to stand in the area and, as he read, his voice echoed up the stairwell.

Sometimes the isolation would become difficult for Keeper Jamiesons wife, but she kept occupied watching the children, writing poetry, and painting. The childrens chores included cleaning and polishing in the lighthouse. For fun, the children would hitch a cart in the summer and a sled in the winter to their Saint Bernard dog. They would swing from ropes tied to the flagpole and walk along the dunes, which were often populated with seals.

The family ate deer and ducks shot by Jamieson and the fish he caught. I remember my mother preparing eels for supper, said Mrs. Rouillard. There always seemed to me a lot of those.

The icy harbor also plagued Keeper Jamieson. In 1903, on the day after Christmas, Jamieson and his brother-in-law took the boat to town for supplies. As they were about to return, the brother-in-law remembered he had neglected to buy something and returned to town. Initially, Jamieson intended to wait, but noticing the worsening weather decided to depart without him.

As Jamiesons wife watched from the shore near the light, a severe squall began to blow and the boat disappeared from sight. Fearful that her husbands life had been lost, she lit the light at sundown and began to pace all night long. Unbeknownst to her, Keeper Jamieson had been forced to turn around and spend the night at a friends home. When she saw him walking up the beach in the morning, she fainted. Jamieson resigned from the Lighthouse Service in 1906.

As the prominence of Barnstable Harbor decreased and ever-moving dunes positioned Sandy Neck Light farther inland, the government decided to surplus the lighthouse in 1931. An automated acetylene light mounted atop a white steel skeleton tower 200 feet closer to the end of Sandy Neck took over the role of guiding mariners into the harbor, and William L. Anderson, the lights last keeper, relocated to Great Point Lighthouse on Nantucket. Two years later, authorities lopped the head off the old lighthouse, removing the lantern room and dumping it in the harbor to prevent seafarers from being confused by reflections from the glass.

Warren J. Clear bought the lighthouse buildings and its 1.93-acre plot for $711 in 1933, and shortly thereafter Francis and Margaret Ellis purchased it from him. The Coast Guard leased the station from the Elisses in December 1942 and housed a beach patrol, reportedly an African-American unit, there until 1944, when the property was sold to radio personality Fred Lang. The Hinckley family purchased the property from Lang in 1950. Ken Morton and Kee Hinckley managed Sandy Neck Lighthouse for the Hinckley family for several years.

The Sandy Neck Lighthouse Restoration Committee was formed in 2003 to restore the tower to its proper appearance with the assistance of the Cape Cod Chapter of the American Lighthouse Foundation. Committee Chairman Ron S. Jansson, a local lawyer, had rowed across the harbor as a five-year-old boy with his grandfather and asked, Why is that lighthouse broken? His grandfather replied, I dont know, but maybe when you get older you can fix it.

Eschewing government grants since they required that the lighthouse be open to the public, the committee raised private donations for the repairs. They also received help from the Great Lakes Lighthouse Keepers Association, which supplied them with a mold for a ten-sided, cast-iron lantern room that had been used during the restoration of Michigans St. Helena Light Station. On October 20, 2007, the sesquicentennial year for the 1857 tower, a group of supporters aboard a Hyannis Whale Watch vessel, looked on as a cover was removed from the lantern room allowing Sandy Points beacon to beam forth once again. The order to remove the cover was given via cellphone by Lila Lorusso, who was a major contributor to the restoration. A surprise fireworks display behind the lighthouse capped off the evening. The stations oil house, built in 1905, was restored in 2008, and in 2010 a light-emitting-diode beacon was installed in the lantern room, increasing the range of the light from 4.2 to 10.4 nautical miles.

For a larger map of Sandy Neck Lighthouse, click the lighthouse in the above map.

To access this light by land, a four-wheel drive vehicle and a permit are required or legs strong enough to walk six miles one way in sand. A distant view of the light is possible from the marina at Barnstable Village. We chartered a boat in the marina to take us out to the light, but whale watching cruises that leave from the marina also pass by the light. To reach the marina, take Exit 6 from Route 6 and go north on Route 132 to Route 6A. Turn right on Route A and continue for 2.6 miles to Mill Way. Turn left on Mill Way and follow it to the marina at its end.