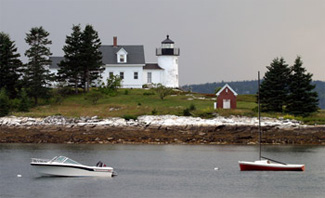 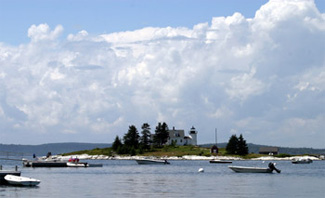 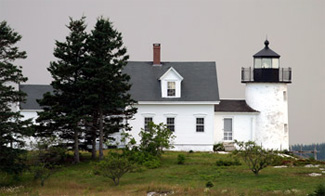 Separated from the mainland by a narrow channel called Eggemoggin Reach, the relatively large Deer Isle and Little Deer Isle are surrounded by a whole mess of islands. At less than two acres in size, Pumpkin Islandhome to Pumpkin Island Lighthouseis just a little bit of the mess.

Deer Isle was the heart of the homeland for the Eastern Abeneki (or Abenaki), a group of sub-tribes of Algonquin speaking people, when William Eaton and his wife Meribah arrived in 1762 to become the first permanent white settlers of Deer Isle.

The area was rich in wild game, primarily deerfor which Deer Isle was named. A flourishing sawmill was established by one of the early settlers to exploit the islands wealth of timber, and seafood brought prosperity to the area, as well. In the mid-1800s, the islands pinkish granite was used in many classic-style banks, city halls, post offices, and memorials along the eastern seaboard.

An 1852 report of the U.S. Coast Survey recommended that a lighthouse be built to mark Eggemoggin Reach, as it was used by all traders and coasting vessels to and from the eastward. Although the waterway was not used as much as Muscle Ridge Channel, the report noted it was nearly as useful to commerce, and would be more so were there guides for entering it at night.

Condon Point on the mainland was initially considered as a location for the lighthouse, but the Coast Survey suggested Pumpkin Island instead. Located on the south side of the northwestern entrance to Eggemoggin Reach, Pumpkin Island lies a short distance offshore from the northwest tip of Little Deer Isle and about a mile across the reach from Bucks Harbor. Even though Congress appropriated $3,500 for the light in August 1852, difficulties acquiring the island from John Chester Tibbetts delayed construction of the lighthouse until the summer of 1854. Tibbetts, who was born in nearby Brooklin, went to sea as a youth, and by the age of thirty had established himself as a captain, was appointed first keeper of Pumpkin Island Lighthouse at an annual salary of $350.

Pumpkin Islands lightwhich in good weather could be seen nine nautical miles was first exhibited on January 1, 1855. A fifth-order Fresnel lens, one of the first Fresnel lenses to be used in Maine, was mounted in the lantern room of the round, brick tower, which was attached via a work shed to a one-and-a-half-story dwelling that was originally painted brown. The tower measures seventeen feet tall to the lantern deck, and gave the light a focal plane of twenty-seven feet above mean high water. Keeper Tibbets remained at Pumpkin Island until 1861.

The light station received a new wooden cistern set atop stone piers in 1867 to replace an earlier one. A new boat was supplied in 1868 along with cooking stove fixtures and twenty-four panes of new glass.

In 1870, Charles Leroy Babson, a native of nearby Brooklin, began his lightkeeping career at Pumpkin Island. According to the family, Babsons niece Josephine Herrick would tend the light when the keeper was absent from the island.

During the Civil War, Babson was shot during the Battle of Fredericksburg and ultimately lost his left leg. While confined to a Rhode Island hospital following the injury, Babson was pronounced dead. However, a nurse swore that she had seen one of his fingers move and with the help of a doctor revived him.

Babsons brother, William Kittridge Babson, was not so lucky. Having received word of his brothers demise, William traveled to Rhode Island to retrieve the body for burial at Brooklin. Upon learning his brother was alive and recuperating, William started for home but contracted pneumonia on the trip and passed away a few weeks later.

Keeper Babson, who walked with the aid of a cane, served at Pumpkin Island until 1902.

this light, together with several others on this part of the coast, are not only useless, but are actually the cause of disastersthey frequently [draw] vessels into passages obstructed by ice, and as a remedy I would respectfully recommend that the Inspector be authorized to cause such lights to be extinguished when in his judgement [sic] it may be necessary.

It seems that Duanes suggestion was heeded, because a year later, an inspection report described Pumpkin Island as:

about 1½ acres. None cultivated. One acre in grass, ½ acre rocky with small spruce trees at S.W. end. Station kept in fair condition, is of little service as the waters hereabouts are landlocked, and the light can be serviceable only about three miles at the farthest. The Lewiston Steamer, which runs during the summer months, is about the only vessel using it. It is discontinued when the ice makes.

Some changes and repairs to the station over the years included: The dwelling house was painted white by 1880, and in 1885, a wood frame boathouse, measuring twenty by twelve feet, was constructed. A brick cistern was built in 1887, and a room was added to dwelling by underpinning, lathing, back-plastering and plastering the summer kitchen. In 1890: The old narrow and leaky stone deck and dilapidated lantern were replaced by an iron deck, 14 feet 6 inches in diameter, with iron railing and a modern fourth-order lantern. A storm-porch was built at the back door of the dwelling and the roof of the work-room was reshingled. In 1902, the keepers house received a new cellar, that housed a cistern, and three dormers windows in its roof. A fuel house was also built that year. The year 1906 saw a new oil house and boat slip, plus the enlargement of the boathouse. The original Fresnel lens was replaced by another fifth-order lens in 1909.

In 1923, Federal Court Judge John A. Peters wrote the following letter that was forwarded to George R. Putnam, commissioner of the Bureau of Lighthouses: Mr. Newman (Charles, I think) Lighthouse keeper at Pumpkin Island Lightis greatly in need of a telephone. For lack of one last winter when the bay was frozen over and he fell into a hole on the ice he came near dying and the light came near going out. He will put the telephone in himself if the Government will let him have some old telephone cable. By the end of the next year, Keeper Charles Newman had installed a telephone at the lighthouse at his own expense.

Keeper Charles Newman took charge of Pumpkin Island Lighthouse in 1911 and remained at the station for roughly twenty years. During this time, he was commended for rendering assistance to mariners on multiple occasions. In 1916, Keeper Newman towed a disabled, badly leaking motorboat, with two men aboard, to port. In 1920, he towed the disabled powerboat Ark to the station and repaired its engine. The following year, he made temporary repairs to a disabled powerboat and furnished food, dry clothing and lodging to its occupant. Newman rescued two ladies and two children who were adrift in a rowboat in July 1921, and in 1922 he took the stations fire extinguisher and saved a man aboard a burning powerboat near the station. In 1927, Keeper Newman towed a powerboat with two men aboard to the station, and the following year, he assisted two vessels, one of which had run aground on Merrymans Ledge.

Pumpkin Islands final keeper, Frank M. Rumery, served for just a few years before the lighthouse was decommissioned at the end of January 1933.

In 1934, Pumpkin Island was sold for $552 by the government to George Harmon, of Bar Harbor, who also purchased Winter Harbor Lighthouse and Massachusetts Bird Island Lighthouse that were auctioned at the same time. Pumpkin Island has been sold several times since and remains in private hands.

For a larger map of Pumpkin Island Lighthouse, click the lighthouse in the above map.

If you are looking for a place to stay in the area, the Inn on the Harbor in Stonington is a fine choice. They also have the lighthouse stamps for eight local lighthouses, including Pumpkin Island.

To view the lighthouse from the water, you can arrange a trip around Deer Isle with Guided Island Tours.