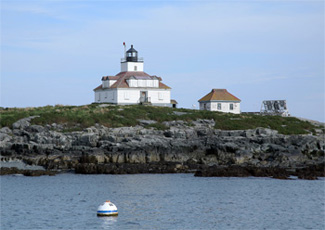 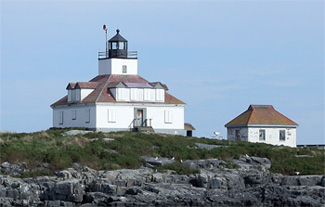 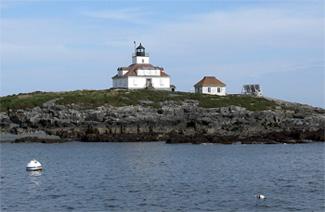 Early photographs of Egg Rock Lighthouse show a building that might have been constructed using childrens building blocks. Originally, the lighthouse was a rare example of a twelve-foot square, brick tower rising from the center of a square, nearly-flat-roofed keepers dwelling. Instead of the usual spiral staircase found in lighthouse towers, the metal stairs leading to the lantern room follow the square contours of the building upwards. A pyramid-shaped fog bell tower stood on stilts near the edge of the water, with its bell facing out to sea. On June 23, 1874, Congress appropriated $15,000 for a light-house and fog signal at or in vicinity of Egg Rock due to increasing seasonal ferry traffic. Difficulties in obtaining title to the island delayed construction until June 1875. The Lighthouse Board noted that landing material at the site was problematic and similar to the situation faced at Avery Rock, where a lighthouse using identical plans was under construction. By July 1, 1875, the foundation for the lighthouse had been laid on Egg Rock, the brickwork was nearly finished, and the ironwork was completed and ready to be set in place, but the station would not be put into operation until November 1, 1875. The tower held a fifth-order Fresnel lens that exhibited a fixed red light tended by Egg Rocks first keepera twice-wounded Civil War veteran name named Ambrose H. Wasgatt, who remained at the light for about ten years.

Just a few months after it was activated, the exposed lighthouse experienced the first of many tests Mother Nature would send its way as recorded in the Annual Report of the Lighthouse Board: During a gale on the 21st of March, 1876, the sea washed over the rock, carrying away the fuel shed and moving the bell tower some 30 feet. The windows of the dwelling were broken in on the sea-side, and the dwelling flooded to such an extent that the oilbutts were moved from their benches. Amaziah R. Small, who succeeded Wasgatt as keeper, was at the light in 1887, when a gale swept across the island carrying off the outhouse, hen house, and everything moveable. Keeper Heber Sawyer wrote of two similar storms in 1900. A gale on February 1, 1908 was strong enough to move rocks on the island weighing up to thirty tons.

Unfortunately, the placement of the dwelling around the central tower made the dispersed rooms nearly impossible to heat during Maines long, harsh winters. In 1899, $1,700 was requested for a second floor that would provide a sufficient number of rooms for a second family and make the dwelling easier to heat. This renovation gave the station its current roofline with its numerous dormers, and made room for an assistant keeper, who was added to the station in 1898.

In 1901, the fifth-order Fresnel lens was upgraded to a more powerful fourth-order lens that changed the lights characteristic from fixed red to a white flash every five seconds. Problems with the rotating mechanism caused the lens to stop periodically, which cracked some of its prisms.

Egg Rock Lighthouse sits at the mouth of Frenchmans Bay, named for Samuel de Champlain, the French explorer who mapped and explored the area in 1604. As archaeological evidence has shown in the form of Native American artifacts and several hundred shell heaps, the area also served as the summer home for Wabanaki tribes.

One of the areas most famous summer residents was Joseph Pulitzer of newspaper fame, whose family established the Pulitzer Prize in his honor. In 1894, he purchased a twenty-seven-room summer house called Chatwold, in Bar Harbor, four miles from Egg Rock. Pulitzer began extensive renovations, and before long the house totaled over fifty rooms. Pulitzers extreme sensitivity to noise prompted him to spend over $100,000 to build what was pronounced the Tower of Silence by family and staff. Pulitzers bedroom was located at the top of a tower and featured a floor resting on ball bearings, double glazed windows, and walls insulated with steel wool. Still, Egg Rocks fog signal plagued him. In June 1904, the islands fog signal was changed from a bell to a first-class Daboll trumpet, powered by a four-horsepower oil engine, air compressor, and air tank, in duplicate. The upgrade was at least partially in response to the grounding of the Massachusetts battleship on a ledge off Egg Rock the previous year. In 1905, the fog signal sounded 1,119 hours (using 571 gallons of oil); in 1906, it sounded 1,351 hours (requiring 539 gallons of oil); and in 1907, 1,813 hours (762 consuming gallons of oil). Even though Pulitzer had an indoor pool that was ocean fed and steam heated, he couldnt block the moan of the fog horn; and it made him furious.

Complaints by Pulitzer and other residents led Maines Senator Eugene Hale to send a telegram to the Lighthouse Board. An official responded in July 1904, with an apparent brush-off: There is much truth in the story from Bar Harbor and some exaggeration. This fog horn is simply carrying out the mandates of Congress.This conflict between shore dwellers and the mariners has always been with us, and is one of the most difficult situations the department has to face. As the board is created, however, to give protection to the mariner, his interests are to be conserved first, and the summer cottagers who live two months in the year in the vicinity of the station will be given such consideration as is proper. But the issue didnt die there. Rear Adm. Robley D. Evans, chairman of the Lighthouse Board, arrived in Maine to personally assess the situation. By 1905, the axis of the trumpet was changed to approximately magnetic south, away from Bar Harbor, reducing the noise onshore.

For a larger map of Egg Rock Lighthouse, click the lighthouse in the above map.

From Highway 1 at Ellsworth turn south on Highway 3, which leads to Acadia National Park. After just over nine miles you will cross a bridge onto Mount Desert Island. From this point Highway 3 will turn east, and you will arrive in Bar Harbor after 10.3 miles. The lighthouse can be seen by continuing into Acadia National Park and taking the loop road. The view from the loop road is a distant one, and a much better view is possible by taking a boat trip out of Bar Harbor.

A close-up view of the lighthouse can be had on a Lighthouse Cruise offered by Bar Harbor Whale Watch or on a cruise offered by Acadian Boat Tours. For an aerial view, you can take a flight with Maine Coastal Flight Center out of the Bar Harbor airport.


Two Rodman/Dahlgren cannons that were mounted on Egg Rock Island in 1898 as part of the Coastal Defense Battery at Frenchman's Bay can be seen in Bar Harbor at the town pier end of the Shore Path.