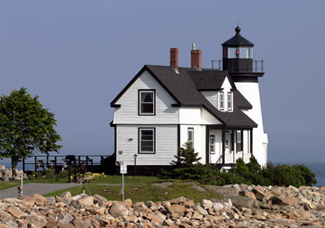 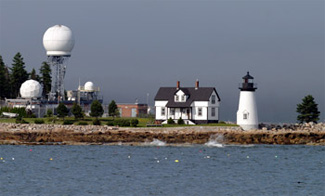 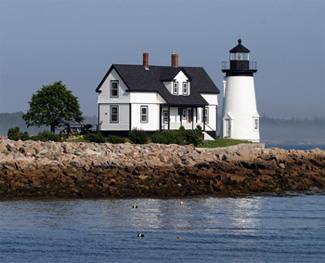 Were it not for the efforts of the U.S. Coast Guard, the American Lighthouse Foundation (ALF), the New England Lighthouse Lovers (NELL), and concerned citizens, Prospect Harbor Lighthouse might not exist today. Budget cuts have reduced funding for the Coast Guard and resulted in the turning over of Prospect Harbor Lighthouse to ALF. Years of water damage caused the timber platform supporting the lantern room and the beautiful staircase winding up to it to rot through and came close to causing one of the last remaining wooden conical towers in the United States to completely collapse. Prospect Harbor Lighthouse, perched on the east side of the entrance to Prospect Harbor, Maine, was originally established on April 2, 1849 after $4,968.17 had been spent on its construction.

In 1856, the tower was fitted with a new and improved reflecting apparatus, which served until a fifth-order Fresnel lens was installed in the lantern room the following year, changing the lights characteristic from fixed white to a white flash every sixty seconds. Congress decided to discontinue Prospect Harbor Light in 1859 after being informed that the harbor was not used as a harbor of refuge and the nearby village had only a little coasting trade, which did not justify the maintenance of the light.

This decision was reversed roughly a decade later, and the light was re-established to serve as a guide to the harbor of refuge which it marks. The existing tower, lantern room, and keepers dwelling were thoroughly renovated and repaired and a few new out-buildings put in place. The Lighthouse Board published the following to announce the reestablishment of the light:

Notice is hereby given that a revolving light, alternating with red and white flashes, at intervals of thirty seconds between the flashes, will be exhibited on May 15, 1870, and on each succeeding evening, from sunset to sunrise, from the old lighthouse tower at Prospect Harbor, Maine.

This tower is on Prospect Harbor Point, Goldsborough, Maine, on the eastern side of the entrance to the harbor. It is built of granite, whitewashed, is connected with and stands at the southerly end of the keepers dwelling, which is a one story granite building.

Despite extensive repairs to the tower and house in 1881, by 1889, the stone dwelling and tower were in poor condition. A wood-frame house, built on the same foundation of its successor, and a separate brick tower with iron deck and lantern were recommended at an estimated cost of $3,500 for the dwelling and $2,750 for the tower. On July 25, 1891, the light was moved to a conical, wooden tower, thirty-eight feet tall, that was built about twenty-five feet south of the granite lighthouse. Around that same time, a frame dwelling 19 by 20 feet in plan, with ells each measuring 12 by 16 feet was built on the foundation of the old stone dwelling. A barn 16 by 28 feet in plan was built to replace the old barn. A brick cistern was built in the cellar and the cellar floor was raised 2 feet to exclude water. The ground around the dwelling was graded to prevent the accumulation of water. A boathouse and boat slip were added in 1897.

Initially, there was a covered passage connecting the new tower and keepers dwelling, but it was later torn down. In 1905, an oil house was built, and the following year, the towers fifth-order Fresnel lens was replaced with a L. Sautter & Co. fourth-order lens, and the lights characteristic was changed from flashing alternately red and white to fixt red with two white sectors.

Ambrose Wasgatt, a veteran of the Civil War, took over as keeper in 1891. His two daughters had fond memories of playing croquet on the lawn with guests and enjoying boathouse dinners where tables full of food were put out for visitors. Ambrose Wasgatt retired in 1918, after thirty-three years at the lighthouse, and William C. Gott was placed in charge of the light.

Albion Faulkingham, the lights last keeper, served from 1930 until the light was automated in 1934. John Workman took over as a caretaker of the property shortly thereafter and lived in the dwelling until 1953. He was paid $25 per month and had to pay $12 in rent each year. Workmans father, Ira, passed away at the light from a heart attack suffered while lighting his pipe on New Years Day 1951.

Workmans son, Gordon, married Carmel Marino in 1944, and she had fond memories of the lighthouse. It was a modern house even without any modern conveniences, Carmel recalled. The black iron sink and handpump and woodstove were always shiny as new. The floors shined and the uncarpeted stairs were very handsome and beautiful as the shore and ocean outside. The outhouse with its Sears catalog and linoleum floor even welcomed you.

The light station, now located on the grounds of a United States Navy satellite operations station, is closed to the general public, but the keepers dwelling has been dubbed Gull Cottage and may be reserved for overnight visits by military families, active and retired.

A number of guests have reported spooky nocturnal occurrences. Some say that a sea captain statue moves around inexplicably, others says theyve seen or heard a spirit at night, while still others report smelling tobacco smoke when no one is smoking and attribute it to the spirit of Grandfather Ira Workman.

These legends drew producer George Steitz to include Prospect Harbor in his Haunted Lighthouses of America series shown on the Travel Channel in 2004. Steitz admitted to not having had any interest in ghosts before the series and had another motive for doing the show. If someone visits a lighthouse as a result of one of these shows, or goes to a bookstore, library or the internet to do some exploring, Ill be satisfied.I hope to stir a few imaginations, especially in younger people, he said. I hope someone will want to find out more about what they see in the show, not necessarily ghosts, but about American history, customs, travel, lighthouses  especially early lighthouse life.Like most legends, nearly every one we feature has some basis in real history.

The real history of the ghosts in this case may have grown from the actions of Robert Kord, whose visit to Gull Cottage in 1997 was recorded in the Machias Valley News. I kept moving these wooden figurines around the place in an effort to scare anybody, wrote Kord. Our Prospect Harbor grandchildren visited, and my techniques worked pretty good on the granddaughter.

In May 2000, the American Lighthouse Foundation assumed responsibility for Prospect Harbor Lighthouse from the Coast Guard. Captain Blaine Horrocks, Chief of Aids to Navigation and Waterways Management for the First Coast Guard District, said, I believe there will be a continuing call to find ways to transfer or lease [lighthouses] to other organizations that have an interest, that could take over the responsibility of maintaining a historical structure, simply because were going to be increasingly hard-pressed to maintain them by ourselves.

U.S. Coast Guard Chief Warrant Officer Dave Waldrip, First District Lighthouse Manager added, And thats why groups like the American Lighthouse Foundation, the U.S. Lighthouse Society, and the Lighthouse Preservation Society are important. They can go out and raise funds. They can publicly solicit donations and put those dollars back into the maintenance of the tower. And I think that partnership, I like to call it, when we lease or license a light out to a group, is just great for that light. They can put more money into a tower than what we have and ultimately end up with a better looking structure while the Coast Guard can focus on maintaining the signal for the mariner.

Funding for those groups comes from people like you who decide that rather than just passively enjoying these remaining gems of history through reading about and visiting them, its time to take personal action to help save them for future generations by contacting the American Lighthouse Foundation, the New England Lighthouse Lovers, or another organization of your choice.

For a larger map of Prospect Harbor Lighthouse, click the lighthouse in the above map.

The keeper's dwelling is owned by the Navy, while the tower is owned by the Coast Guard, who has leased it to the American Lighthouse Foundation. Grounds/dwelling/tower closed.