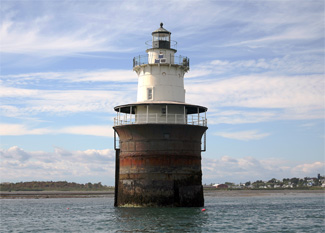 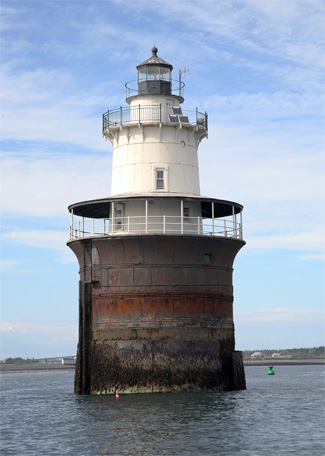 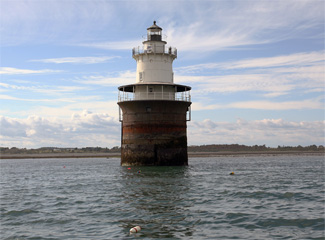 Lubec Channel Lighthouse, located in the channel between South Lubec Beach and Campobello Island, is one of only three so-called spark plug or wedding cake style lights that remain standing along the coast of Maine. Since 1903, it has been painted white, instead of its original brown.

In 2006, the lighthouse, deemed excess by the Coast Guard, was offered at no cost to eligible entities, including federal, state, and local agencies, non-profit corporations, and educational organizations. When no qualified group was found to take control of the lighthouse, the General Services Administration sold the structure via an online auction. The winner, with a bid of $46,000 in July of 2007, was Gary Zaremba, president of Artisan Restoration Group in New York City.

The town of Lubec, Maine, the easternmost town in the United States, was shaped by its proximity to Canada and the sea. Members of the Passamaquoddy tribe returned to the area annually for its spring smelt run, and to gather sweet grass and harvest shellfish. Later residents included Acadians expelled by the British for their support of the War for Independence. In 1798, Moose Island, Lubec and North Lubec, with their 588 residents, were incorporated as Eastport until June 21, 1811, when they successfully petitioned to incorporate as Lubeck, as it was originally spelled. During this period, the smuggling of flour, salt beef, pork, wood, and other goods between the U.S. and British provinces thrived and brought considerable wealth and growth to the area.

Trade grew in the 1870s, with exports of salted and smoked fish, potatoes, hay, wood, sardines, and other agricultural products in return for coal and flour from Boston, and sugar, rum, molasses, coffee, fruit, spices, and guano from the West Indies. By the 1880s, steamship travel was also growing and wharves were built to accommodate it.

An 1883 Lighthouse Board report stated: Now that the dredged channel between Lubec and Campobello Island, on the coast of Maine, has been completed by the War Department, it is evident that, to make this channel of value to commerce at night, a light should be established at the entrance to Lubec Narrows. The Board asked for $40,000 for the project, but had to repeat its request before Congress finally appropriated $40,000 in 1886. The following year, title for the selected site was secured from the State of Maine and test borings were made into the tough blue clay of the underlying shoal. After designing an appropriate structure and inviting bids for the metalwork, the Lighthouse Board realized an additional $12,000 was required, and in 1888, that amount was obtained.

The Annual Report of the Lighthouse Board for 1890 provides details on the construction work.

The lighthouse which is now being built is to consist of a cylindrical iron caisson, 33 feet in diameter and 48 feet high, cast in eight sections of thirty-two plates each, expanding, in the upper section, to 37 feet 9 inches in diameter, to be sunk 6 feet into the site (11 feet below extreme low and 36 feet below extreme high water), filled with concrete, and surmounted by an iron tower, 37 feet in height from base to focal plane. Three contracts were made; one for the metal-work, one for the Portland cement, and a third for providing all other materials and erecting the structure complete, at the site. The metal-work from Detroit, Mich.; 1,100 barrels, or about one-half of the Portland cement, from Boston, and the greater part of the other materials; the sand from Plum Island at the mouth of the Merrimac River, Massachusetts, and the broken stone and brick from the neighborhood of the station, were delivered on the wharves at Lubec, Me., about 1 mile from the site. Advantage was taken of the great range, 17 to 21 feet, of the tides to erect the two lower sections of the caisson on the mud flats in the vicinity, whence they were very readily floated, by temporary caisson, to the site, and there sunk. After carrying up the caisson to the height of 36 feet, by the addition of four more sections, it was pumped out and sunk by excavation to the depth of four feet, when an irruption of water through the subsoil, on August 29, 1889, within the caisson, interrupted the work and made necessary a sub-foundation of piles.

The driving of piles within the cylinder was commenced September 28 and discontinued November 4, 1889. From November 5 to December 5 the adequacy of the sub-foundation for the support of the structure was tested by driving two test piles within the cylinder and loading them respectively with 24 ½ and 31 tons of kentledge, which was obtained from the Boston Navy-yard. On December 5 work was suspended for the winter. Work was resumed at the site on April 24, 1890, and on June 12 the sub-foundation was completed. It consists of 185 spruce piles driven within the cylinder; 23 of them, forming a ring next its perimeter, were spliced and driven to a depth of 69 feet to a hard stratum of gravel and bowlders; the 162 interior piles were driven in the soft clay to a depth of 35 to 45 feet, and the heads of all the piles were driven to, or cut off flush with, the surface of the site. The cylinder, settled to the depth of 6 feet into the site, was accurately leveled, and on June 20 the deposit of concrete within it was commenced. After concrete had been deposited under water to the depth of 14 feet the cylinder was pumped out, and the laying of well rammed concrete has since been progressing at the rate of about 50 cubic yards per day.

The extra work created by driving the foundation piles required an additional appropriation of $15,500.

A temporary lens-lantern light was used to mark the structure from November 25, 1889, until the light from the towers fifth-order Fresnel lens was first exhibited on December 31, 1890. The Henry-Lepaute Fresnel lens featured eight flash panels and produced a white flash every fifteen seconds. The stations 1,200-pound fog bell, struck by machinery, was placed in operation on January 31, 1891. A temporary fog bell had been used on the substructure from December 18, 1889 until April 15, 1890.

The life of Frederic Morong, Sr., Lubec Channels first keeper, was closely connected with the sea. After working as a seaman, mate, and master, he operated steamships along the coast of Maine and New Brunswick, before joining the Lighthouse Service and eventually transferring to Lubec Channel Lighthouse. Frederics son, Frederic, Jr., became the District Machinist.

Lights and fog signals were dependent on the skills of the District Machinist. Instruction No. 1 of the 1902 instructions to Light-Keepers and Masters of Light-House Vessels stated: All keepers must acquaint themselves with the workings of the apparatus in their charge. When the station is visited by an officer or employee of the Lighthouse Establishment, especially while the machinist or lampist is there, the keepers will take pains to acquire knowledge of every detail regarding the mechanism of the apparatus. Ignorance on any point will not be considered an excuse for neglect of duty.

As district machinist, Fred often heard complaints about time-consuming, repetitive chores, in particular, the polishing of brass. His lighthearted poem, Brasswork: The Light-Keepers Lament, became well known after being read over a Boston radio station. As the son of a keeper, Fred Jr. probably spent his share of time polishing brass and acknowledged his current role as well in the poems eleventh stanza:

So it goes all Summer, and along in the Fall
Comes the district machinist to overhaul,
And rub dirty and greasy paws over all
My BRASSWORK.

Lubec Channel Lighthouse was a stag station, with two male resident keepers. The keepers had about 628 square feet of living space spread over the two lowest levels of the five-level tower. The bottom floor was a combined living room and kitchen, and the bedroom was located above that. Rainwater was collected from the verandah encircling then tower and then fed down via pipes to 2,800-gallon cistern located in the cellar, where powdered chalk or whiting was added to purify the water.

After serving as assistant keeper since the station was established, Loring Myers was promoted to head keeper in 1895. During his thirty-plus years on the light, Myer saved a number of lives, including a group of women from a burning boat, and two men, whose boat capsized. It must have been Myers experience on the sea and his involvement in numerous rescues that inspired him to invent the Myers non-sinkable lifeboat.

A demonstration of the Myers lifeboat was given during the annual conference of the supervising inspectors of the Steamboat Inspection Service held in Washington, D.C. in 1905. Both Keeper Myers and an officer of the company formed to manufacture the boat were present for the demonstration, of which a local newspaper provided the following account:

The boat is as buoyant as a cork. It has neither keel nor deck, as both sides are the same, and are fitted with exits that when closed are water-tight, so that the boat cannot be wrecked by being turned over by the waves.

Fifteen negro men entered the boat, when the inventor and six or seven of the supervising inspectors stood on the deck and rocked it. Thus heavily loaded, the boat was submerged only two or three inches lower than when it was empty.

While the lifeboat was approved for use on vessels, it was not widely adopted. After the Titanic disaster, Keeper Myers often said that if that vessel had been equipped with his lifeboats, many more lives would have been saved. The lifeboat was Myers only invention, as he filed a patent in 1914 for a surf-anchor.

In November 1920, Elson Small became assistant keeper and alternated two-day stays at the light with Myers. Not long after, Small married Myers niece, Constance Connie Scovill, who authored the book, The Lighthouse Keepers Wife, wherein she recounts her first time climbing the thirty-foot ladder bolted to the light, battling both a fear of heights and boats while trying not to appear afraid. At least she didnt have to climb the two inclined, movable, rickety ladders that had served until 1899.

From 1934 to 1939, Arthur R. Marston served as the final head keeper of Lubec Channel Lighthouse. Nathaniel Alley, the previous head keeper, was alone at the station in 1934, when gas from the coal stove caused him to lose consciousness. After failing to respond to the customary hail made by the captain of the Grand Manan ferry, Alley was rescued and taken to Lubec, where he died. An automated acetylene gas system was installed in the lighthouse in 1939, and the station was de-staffed.

The Coast Guard planned to discontinue the light in 1989, but plans were dropped following a local campaign called Save the Spark plug. Over the years, the light developed a lean, requiring a $700,000 renovation in 1992. After receiving some new plates, an infusion of 200 cubic yards of concrete, and 12 new pilesone driven 149 feet deepthe caisson still lists, but only about six degrees. The tower also received a new canopy roof and windows in 1992.

Visitors can get close to at least a piece of the station, as its fog bell is on display at the Lubec Historical Society. As of 2011, Gary Zaremba, the lighthouses owner, had done little to no work on the tower.

For a larger map of Lubec Channel Lighthouse, click the lighthouse in the above map.

From Highway 1 in Whiting, continue east on Highway 189 for just under ten miles towards Lubec. Before reaching Lubec, turn south on Boot Cove Road from where you will get a distant view of the lighthouse out in the channel.