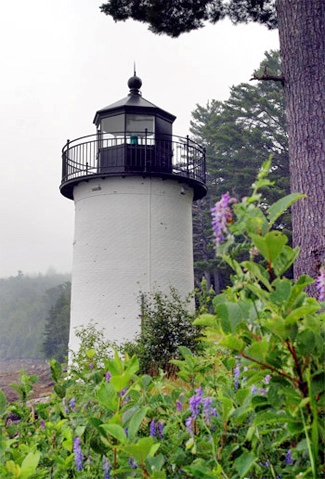 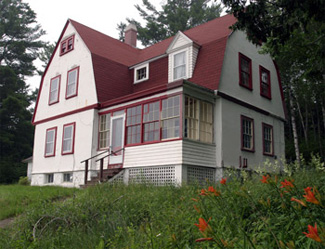 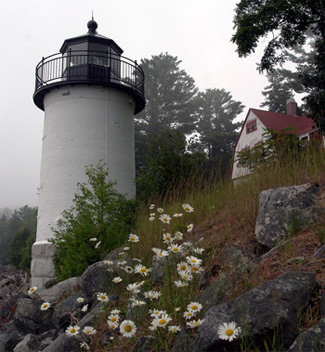 Whitlocks Mill Lighthouse has the distinction of being both the last built and northernmost of all lighthouses in Maine. It was constructed to serve traffic bound to and from the port at Calais (local pronunciation rhymes with malice), which was formerly surrounded by thick pine forests. When Napoleon barred the British from the Baltics, they turned to Calais for their ships timbers. In 1860, Calais sawmills could process fifty-five million feet of timber per year. The towns port was navigable nine months per year and brought the areas bricks, bedsteads, brooms, carriages, timber, plaster, and ships to consumers. In 1853, the local customs collector asked Theodore Cary, master of the Eastport steamer Pequasset, if any lighthouse, buoy, beacon, or monument was required for navigating St. Croix River. Cary replied that a beacon was needed on the ledge, four miles below Calais, along with two or three buoys above that location. Near the ledge, the river curves and is quite narrow, rendering navigation extremely difficult and dangerous, especially during the spring and fall freshets. Cary also recommended a lighthouse for the Big Island, located ten miles below Calais and known now as St. Croix Island. The deputy collector at Calais reported that over 1,500 vessels, exclusive of steamboats, had called at Calais during the previous year, making a good case that the river was entitled to navigational aids.

St. Croix Island received its lighthouse in 1857, but the U.S. government didnt mark the rivers dogleg curve near the ledge until a red lantern light was displayed from a tree a few hundred yards above Whitlocks Mill on July 15, 1892, to enable the steamers, plying between Eastport and Calais, and especially towboats, to make the difficult turn at the Narrows. The Canadian government maintained two lights on their shore near the ledge, but a light on the American shore had been needed for some time to help mariners safely navigate the difficult turn. The lantern was intended only as a temporary aid, and each year from 1894 to 1899, the Lighthouse Board requested $250 to purchase land at the site for a proper light.

The lantern was tended by Colin C. Whitlock, and, if local rumors are true, frequently by his wife after hed consumed too much alcohol. As Whitlock owned a lathe mill at nearby Bog Brook, the light was given the name Whitlocks Mill Light.

Finally in 1901, a piece of land, containing 100 square feet, was purchased, surveyed, and its boundaries marked with copper bolts. By 1893, the light was moved from a tree to a post, and in 1902 that post supporting the lantern was strengthened. In 1906, two new lantern posts were supplied.

On March 4, 1907 and May 27, 1908, Congress appropriated funds that were used, starting in 1909, to construct a keepers dwelling and brick tower at the station. The cylindrical brick tower, which stands twenty-five feet tall and has a diameter of twelve feet, was erected on a granite foundation. Originally painted red, the tower received its current white daymark in 1914. The lighthouse is lined with white enamel brick, which is rather uncommon for a U.S. lighthouse. A fourth-order Fresnel lens was originally used in the new tower to exhibit a fixed red light until the lights characteristic was changed to green in 1931.

About fifty feet from the tower sits the seven-room, one-and-a-half-story Dutch Colonial keepers house, which is L-shaped and faces the river. The recessed portion of the ell has an enclosed porch. The dwelling was completed in December 1909 for $4,041.01, and a hot-water heating plant was added in 1913 at a cost of $375. Rainwater was collected from the dwellings gambrel-roof and stored in tanks in the cellar.

A hip-roofed shed, and a small stone oil house, located about 300 feet from the tower, were added in 1909. Although its bell has been removed for display at the St. Croix Historical Society, a wooden, pyramid-shaped bell house still remains at the station. The bell tower was added to the station in 1931, around the time the station was electrified.

Aaron V. Tucker, who had been in charge of the lantern at Whitlocks Mill since at least 1897, was made the first keeper of the lighthouse when it was completed in 1909. Tucker looked after the light until 1912, when Frank N. Jellison moved up the river from St. Croix Lighthouse to become the new keeper at Whitlocks Mill. Keeper Jellison was commended in 1912 for caring for the body of the mate of the dredge Bay State, after he was killed in a collision on June 16. Jellison retired in 1920 and was replaced by his brother Joseph W. Jellison, who had previously been head keeper at Tenants Harbor for over twenty years and was nearing retirement himself.

Frank B. Ingalls, who had replaced Frank Jellison as keeper of St. Croix Lighthouse, followed in the footsteps of his predecessor and moved upstream to become keeper at Whitlocks Mill in 1923. Keeper Ingalls was in charge of the lighthouse for over two decades and received the efficiency flag on at least one occasion for having the model station in the district.

In 1949, Jasper Cheney transferred from Libby Island to Whitlocks Mill and reunited his family. It was the first land station he had been assigned to where we could all live together all year long, said his daughter Ella. Her parents both just worked nonstop inside and out to make our house and the lighthouse a place of beauty, and it sure was! Many, many tourists visited in the summer and all agreed that it was just breathtaking with all the flowers in bloom and the scenery. Ella and her brother were both married at Whitlocks Mill Lighthouse. Ill health forced Cheneys retirement in 1957.

One of the last Coast Guard keepers was Boatswains Mate Chief Russell Reilly. Kelly, his daughter, would dog his footsteps around the lighthouse as he performed his duties. She loved the wintertime trips to the mailbox, pulled uphill on a sled by her father. After retrieving the mail, the two would glide back home on the sled together.

Following the lights automation and the removal of its Fresnel lens to the Maine Lighthouse Museum in Rockland in 1969, the station was leased to the Washington County Vocational Technical Institute in the 1970s. The property was added to the National Register of Historic Places as Whitlocks Mill Light Station on January 21, 1988.

The St. Croix Historical Society applied for and was awarded ownership of Whitlocks Mill Lighthouse in 1997, as part of the Maine Lights Program. The Coast Guard still maintains the towers flashing green light. The three-bedroom, 2,428-square-foot keepers house and other outbuildings are privately owned and closed to the public. The dwelling sold in 2004, with an asking price of $350,000.

For a larger map of Whitlocks Mill Lighthouse, click the lighthouse in the above map.

As the keeper's dwelling is a private residence, the best vantage point for viewing the lighthouse is from a roadside picnic area alongside Route 1, roughly 2.5 miles south of Calais. The fourth-order Fresnel lens formerly used in the tower is on display at the Maine Lighthouse Museum in Rockland.

The tower is owned by the St. Croix Historical Society, while the dwelling is privately owned. Grounds/dwelling/tower closed.