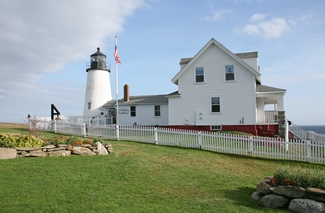 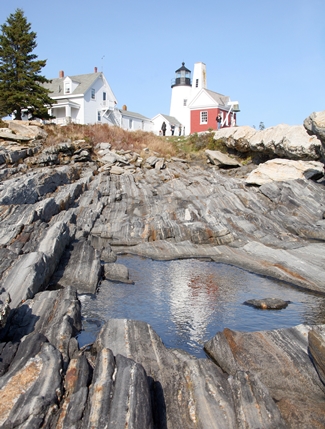 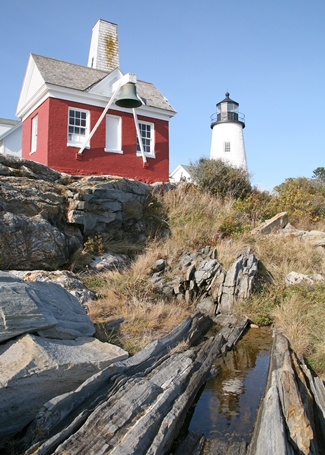 This picturesque lighthouse has attracted many, including Edward Hopper who captured its image in his 1929 watercolor, Pemaquid Light. Today, Pemaquid Point, with its colorful rocky shoreline, is one of New Englands most-visited and photographed lighthouses, drawing over 100,000 visitors annually.

When Bartholomew Gosnold sailed to Pemaquid in 1602, the area was already a port of call for fishermen of various nationalities and the occasional coastal trader. Still, it was a bit surprising for Gosnold when Native Americans boarded the Dartsmouth in western garb and greeted him in English.

The areas most famous shipwreck was the 240-ton Angel Gabriel, a British passenger galleon carrying about 100 English settlers and much needed provisions. The partially unloaded bark went down in an August 1635 hurricane taking four or five persons and all the passengers belongings.

After the region had been settled for over two centuries, an act dated May 18, 1826 finally provided $4,000 for the construction of a rubblestone lighthouse and a twenty by thirty-four-foot keepers house, with an attached ten by twelve-foot kitchen at Pemaquid Point. The light stations plot was purchased for ninety dollars from Samuel and Sarah Martin, descendants of survivors of the Angel Gabriel shipwreck. Jeremiah Berry of Thomaston built the structures, which ended up costing $3,503, and Pemaquids fixed white light went into service on November 29, 1827.

Although Stephen Pleasonton, the Treasury auditor in charge of lighthouses, recommended Esais Preble to be Pemaquid Points first keeper, the honor went to forty-year-old Isaac Dunham of Bath, Maine. Dunham had served as a privateer in the War of 1812, then moved to Maine and turned to farming before becoming a lighthouse keeper at $350 per year.

A scant eight years after Pemaquid Lighthouse was built, a replacement tower was required. To avoid past mistakes, the contract specified that the mortar was never to have been wet with salt water and that tower was to be built solid with Stone and Mortar, in a single walland not to be done by building two walls and filling in. Joseph Berry of Georgetown, nephew of the original builder, received the contract for the conical granite tower. The need for the accompanying lighting apparatus was advertised in March 1835, and Winslow Lewis was awarded a contract to supply eight oil lamps and fourteen-inch reflectors.

This second tower, the one that survives today, measures thirty feet to the lantern deck, and is sixteen feet in diameter at the base and ten feet in diameter at the top. The original interior stairway was of good sound hard pine, and an octagonal, domed iron lantern capped the tower. Keeper Dunham oversaw the job and certified that a Better Tower and Lantern never was Built in this State. Also the Lamps reflectors and apparatus is according to Contract.

Keeper Isaac Dunham, his wife, and five children were joined in February 1831 by a baby boy, whom they named Benjamin Franklin Dunham. When Keeper Dunhams father, Captain Cornelius Dunham, passed away while at the station in July 1835, he was buried in a small cemetery near the lighthouse.

Keeper Dunham patented a system for keeping lamp oil from congealing in winter. Although Congress ordered the Treasury to adopt Dunhams invention in 1837, it is not known to what extent it was used.

When Nathaniel Gammage, Jr. took over after Dunham in 1837, Dunham requested and received $1,100 from Gammage for outbuildings he had built at the station. Four years later, a political appointment saw Jeremiah Mears replace Gammage. Keeper Gammage asked to be paid for the outbuildings, but received only a little money from Mears.

The normally critical lighthouse inspector I.W.P. Lewis praised the tower at Pemaquid Point during his 1842 inspection, calling the general state of the tower good, even though it leaked during storms and had eleven broken panes of glass in its lantern. He did, however, have concerns regarding the necessity of the light: It is difficult to conceive for what particular purpose this light was originally placed here, and, from its contiguity to Franklin Island light, we are led to believe it has often been the cause of sad mistakes and disasters of a fatal character. There are both islands and dangerous ledges lying exterior to it, several miles, which have first to be clear before the light can be seen or, if seen, made any use of. Rather than abolish the light at Pemaquid, Lewis recommended that it be reduced from ten lamps and reflectors to a beacon light of just one lamp, suitably constructed.

In 1857, a fourth-order Fresnel lens was installed at Pemaquid Point, and a new keepers dwelling was built.

The keeper after Jeremiah Mears was Joseph Lawler, whose wife, Sophronia, gave birth to a baby girl at the light in 1868. The next keeper was Marcus H. Hanna, son of James and Eliza Hanna who kept Franklin Island Lighthouse. After four years at Pemaquid Point, Hanna used his influence as a Republican and veteran of the Civil War to persuade President Grant to transfer him to Two Lights at Cape Elizabeth, Maine. His arrival was not well received by James Mariner, the keeper already in place there. On March 3, 1873, Mariner wrote in the stations logbook: Mr. Hanna from Pemaquid Light Station will take my place but not with my consent. I am no longer a Republican.

By the late 1800s, Pemaquid Point was a desirable location for families, as it was easily accessible by land and allowed a keeper to raise animals and crops. Pemaquid Point was not, however, easy to reach by water. Lighthouse tenders were forced to anchor offshore and lighter supplies to the station, making it an unpopular destination for the tender crews.

Captain Marr is one of the most widely-known lighthouse men on the Maine coast. As an expression of their feelings of appreciation toward Captain and Mrs. Marr for the many acts of kindness conferred and of regret at their retirement and departure, the summer visitors here have presented to the retiring keeper and his wife a purse of money and a souvenir book, bound in fine leather and containing an appropriate letter and the signatures of the donors.

In 1897, a brick engine house was built for duplicate oil-burning steam engines that rung a new fog bell, which took the place of a smaller bell rung by hand. This steam-powered method for tolling the bell was apparently problematic, as a weight-powered Stevens striking mechanism was installed two years later and a wooden pyramidal tower was built next to the engine house for the weights.

After Marrs retirement, Herbert Robinson became keeper. In 1927, when Keeper Robinson was sixty-eight years old and ready to retire himself, he was commended for performing the following rescue:

On November an 18-year-old boy was washed off the rocks into a heavy sea near Pemaquid Light Station and was drowned. The keeper of the light station, Herbert Robinson, rescued the boys aunt and uncle, who were also washed off the rocks, this act requiring unusual heroism. It was impossible to rescue the boy, as he was not seen after the sea struck him.

The stations final keeper was Leroy S. Elwell, whom the Secretary of Commerce commended for the heroic rescue of three people from a capsized sailboat on August 6, 1930 under extremely hazardous conditions.

In 1934, Pemaquid Point Lighthouse was one of the first in Maine to convert to automatic acetylene gas operation. The Coast Guard removed the stations fog bell in 1937, but a smaller bell is now suspended from the seaward face of the bell house.

In March 1940, Bristol residents voted to purchase the lighthouse property, minus the tower, which was to remain with the Coast Guard. The town paid $1,639 to the government over a period of four years and renamed the site Bristols Lighthouse Park. The Pemaquid Group of Artists added an art gallery to the park in 1960, and the keepers house opened as The Fishermens Museum in 1972. In May 2000, the Coast Guard licensed the tower to the American Lighthouse Foundation, much to the chagrin of locals who didnt want outsiders running their lighthouse.

Pemaquid Point Lighthouse now gleams in the sun following extensive restoration, confirming Keeper Dunhams estimation that the tower was finely crafted. While restoring the exterior of the tower in 2007, masons discovered a forgotten, filled-in window on the east, ocean-facing side of the tower. The masons drew attention to the fact that the granite work closing the window was of poorer quality than the original structure and placed it as later work. Documents detailing exactly when and why the window was removed have yet to be found. Although the window was covered over again, its existence has been well documented in photographs. The towers interior brick veneer, which was added along with the cast-iron staircase during the mid-to-late nineteenth century, was restored in 2010. Restoration funds were donated by Lowes Companies, the National Trust for Historic Preservation, and private individuals through the efforts of the American Lighthouse Foundation.

For a larger map of Pemaquid Point Lighthouse, click the lighthouse in the above map.

From the Highway 1 Business Route in Damariscotta turn south on Highway 129 and drive for just under three miles to the intersection of Highways 129 and 130. Take Highway 130 south for 11.7 miles to Pemaquid Point where you will see the lighthouse.

The Coast Guard has leased Pemaquid Point Lighthouse to the American Lighthouse Foundation, and the tower is opened to visitors by the Friends of Pemaquid Lighthouse, a chapter of the foundation. The keeper's dwelling is home to The Fishermen's Museum, which has the Fresnel lens from Maine's Baker Island Lighthouse on display. Both the tower and museum are typically open daily from mid-May through Columbus Day. Hours for the tower are 10 a.m. to 5 p.m., while the museum is open from 9 a.m. to 5 p.m. A one-bedroom apartment in the keepers house is available for weekly rental through Newcastle Square Vacation Rentals.

Cap'n Fish's out of Boothbay Harbor offers boat tours that pass by the lighthouse.

The lighthouse is owned by the Coast Guard and the dwelling by the Town of Bristol. Grounds/dwelling/tower open.


It might not be immediately obvious, but the lighthouse on Maine's commemorative state quarter is Pemaquid Point Lighthouse. Also included on the quarter is Maine's state tree, the White Pine, and the three-masted schooner Victory Chimes. With accommodations for forty guests, the Victory Chimes is the largest passenger sailing vessel under the U.S. flag.

Pemaquid Point Lighthouse can be seen in the movie "Summer Solstice."