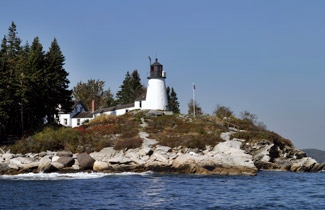 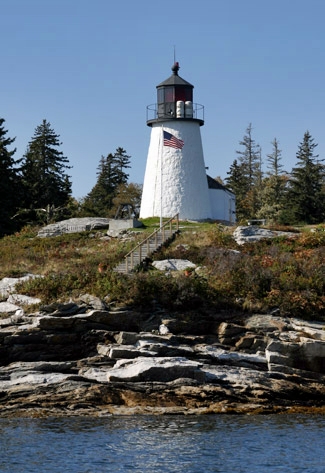 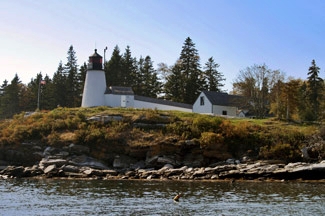 Captain Joseph Smith of the U.S. Navy extolled the merits of the protected waters at Boothbay Harbor in 1837 using the following language: This is well known as one of the most important harbors upon the whole coast. It is easy of ingress and egress, large, safe in gales from any point of the compass, with good anchorage in any part of it. It is a harbor which all vessels bound east or west, when met by head winds or unfavorable weather, endeavor to make. It being a sort of a rendezvous for coasters and more than three hundred sail have been anchored there at one time. On May 21, 1821, officials of Boothbay Harbor and owners of several coasting vessels petitioned the local customs collector for a lighthouse on Burnt Island to help guide vessels into the harbor. Just a few days later, the U.S. government purchased the five-acre island for $150 from businessmen Jacob Auld and Joseph McCobb, using funds from a $10,500 Congressional appropriation passed to cover the construction of three lighthouses in Maine: one on Pond Island at the mouth of the Kennebec River, one on Cross Island near Machias, and one near Boothbay Harbor.

The acreage where the lighthouse was to be constructed was already cleared as sheep farmers regularly set the island afire to improve grazing, a practice that gave Burnt Island its name. Four months after the island was acquired, Burnt Island Lighthouse, Maines ninth, was complete. The nearby sister lights of Ram Island and the Cuckolds were not built until 1883 and 1907.

The conical tower on Burnt Island, built of granite likely quarried on the island, stands thirty feet tall and is lined with brick. The four-foot thick walls at the towers base have given it such stability that it has never been rebuilt, and today it is the second-oldest original lighthouse structure in Maine, behind Portland Head Lighthouse, built in 1791 when Maine was still part of Massachusetts.

The original beacon was made up of ten Lewis patent reflector lamps that were arranged in a circle and burned whale oil. In 1857, a new lantern room was installed atop the tower to house a fourth-order Fresnel lens, which shone a fixed, white light from a focal point of sixty-one feet above sea level. That same year, a wood-framed house, connected to the tower by a covered wooden walkway, replaced the original stone keepers cottage.

A dead angle was put into the lantern on Burnt Island in 1888 so the light would no longer be visible westward of dangerous rocks, just off Southport Island, known as the Cuckolds. Previously, vessels often turned for Boothbay Harbor as soon as they saw the light on Burnt Island and ended up on the Cuckolds. The following year, the characteristic of the light was changed from fixed-white to fixed-red with two white sectors covering the two safe entrances into Boothbay Harbor. In 1901, the characteristic changed from fixed-red to flashing-red, when a square lens, fitted with four bulls-eye panels and revolved by a clockwork mechanism, was placed in the lantern room. The red light flashed once every five seconds, while a flashing white light of the same period was shown in the white sectors. The square lens was removed in 1961, when the station was electrified, and it is now on display at the Maine Maritime Museum.

A total of thirty-one keepers served at Burnt Island between 1821 and 1988, the year the light was automated. The keeper whose service is best documented is James A. McCobb, who served from 1868 to 1880 and was the nephew of one of the property owners who sold the island to the government. Keeper McCobb kept detailed records of his work, the weather, passing vessels, and his family as demonstrated by the following log entries.

December 1, 1873  Worked about the station according to lighthouse regulations. Trimmed the light as usual at nine oclock and again at two. Very cold weather and much vapor flying. Vessels are much iced up as they pass the station.

November 29, 1875  Heavy gale of wind with snow squalls from the northwest came on early in the morning. Wind continues blowing fearfully all through the night and very cold. Much vapor flying. Schooner James Somes of Portland while trying to work into the harbor under very short sail was capsized between the light and Tumbler Island and sank in ten fathoms of water. The captain was drowned, the rest, four in number, were saved by boats coming from the windward. Could not board her from this place on account of the strength of the gale.

March 22, 1877  Wife died this morning about two oclock of congestion of the lungs and cankers in the throat, stomach, and bowels. She had been in feeble health all winter but able to be about the house attending to her work until about two weeks before her death when a cold brought on congestion and then canker which caused her death as above stated.  Her age was fifty three years and four months.

During the summer, when vacationers flocked to Maines coastal resorts, Keeper McCobb was kept busy supervising visitors to the station. One July he wrote, Much company around visiting the station. Some days occupied most of my time not engaged about the light house in waiting upon them. Sometimes almost make themselves troublesome. By the end of the summer, McCobb was happy to see the summer visitors leave. Summer company just leaving for their homes for which we feel truly thankful that the Almighty sends the cool weather to stir them up a little and remind them of home for indeed they do sometimes make a good deal of trouble about the station.

In 1895, a pyramidal bell tower was constructed on the island. A 1,000-pound bell was hung from a beam protruding from the seaward face of the tower, which housed a Gamewell machine for striking the bell. The bell tower was dismantled in 1962, after the availability of electricity allowed the bell to be suspended from a simple metal frame and sounded by an electric striker. The stations boathouse and oil house were respectively added in 1880 and 1899.

Burnt Island Lighthouse was one of just eleven staffed lighthouses in the country in 1988, when it was automated and Henry Sieg, the last keeper, left the island with his family. Henry and his wife Jeanne came to the island in 1983 and added two children to their family during their time there. While Henry loved life on the island, he knew he wouldnt miss getting out of bed on a cold night to activate the foghorn or bundling his kids in survival suits in mid-January to make a trip to shore. Ive got to tell my wife to remind me of these things when we are getting ready to leave here, and I feel like crying, he said. That will be a sad day for me. Were really losing something here. Its more than a home for us. Its a way of life.

In 1998, as part of Maine Lights Program, ownership of Burnt Island Lighthouse was transferred from the Coast Guard to the Maine Department of Marine Resources. Under the leadership of Elaine Jones, director of marine education for the state, needed funding was obtained and the station was thoroughly restored, mostly with volunteer labor. Today, the island serves as a Living Lighthouse, where students come in the spring and fall to learn about the life of a keeper and his family as well as other topics related to Maines maritime heritage. Interpreters play the parts of Keeper Joseph Muise and his family, who were residents of the island from 1936 to 1951, a period in which the lighthouse was passed from the U.S. Lighthouse Service to the Coast Guard. On June 4, 1999, the surviving Muise children returned to the island and provided much of the oral history on which the interpretive program is based. The public is invited to visit Burnt Island and experience the Living Lighthouse during July and August.

During the summer of 2021, members of the local community and several formal lightkeepers and their families gathered to celebrate the bicentennial of Burnt Island Lighthouse. As part of the festivities, Elaine Jones unveiled a bronze plaque affixed to the lighthouse to honor its 200th birthday.

For a larger map of Burnt Island Lighthouse, click the lighthouse in the above map.

Tours that allow you to land on the island and visit Burnt Island Lighthouse are offered in the summer by Balmy Day Cruises. Call (207) 633-2284 for reservations.

You can see the light from shore by taking Highway 27 south from Highway 1 on the east side of the Sheepscot River near Wiscasset. Follow Highway 27 south for eleven miles to Boothbay Harbor. At the outskirts of the city, turn left on Union Street and then right on Atlantic Avenue. After 1.3 miles Atlantic Avenue will become Grandview Road. Continue south on Grandview Road and look for the lighthouse on the island off to your right.

The fourth-order lens from the lighthouse is on display at the Maine Lighthouse Museum in Rockland, Maine.

The lighthouse is owned by the Maine Department of Marine Resources. Grounds/dwelling/tower open.