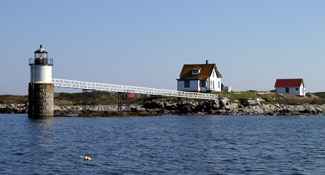 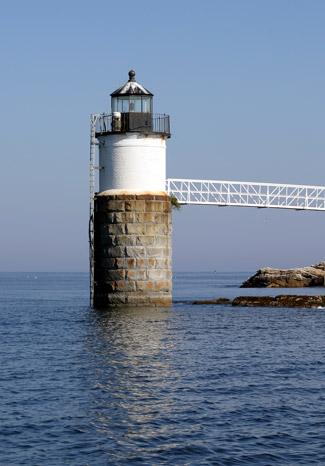 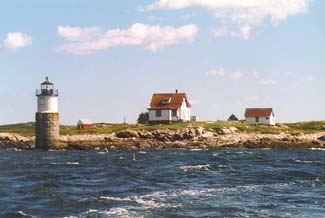 When planning a trip to Ram Island Lighthouse, first make sure you are headed to the correct Ram Island. The name was a popular one, and there are twenty-one Ram Islands in Maine. The one that is home to Ram Island Lighthouse is located near Boothbay Harbor and formerly served as a place to quarantine rams to control sheep breeding. Ram Island Lighthouse is sometimes confused with Ram Island Ledge Lighthouse, a stone tower in Casco Bay that is visible from Portland Head Lighthouse. On March 3, 1837, Congress appropriated $5,000 for a lighthouse on Ram Island, where it could mark the entrance to both Fishermans Island Passage, the eastern gateway to Boothbay Harbor, and Damariscotta River. As a first step in investigating the need for this lighthouse, Captain Joseph Smith of the U.S. Navy solicited the opinions of local mariners. In response, twenty-two individuals signed a letter, dated May 15, 1837, that read in part, We the undersignedwould cheerfully unite in recommending said island as a suitable and proper place for the erection of said light-house. We have for a long time had occasion to pass in and out said river, and think a light-house on said island would be of great service and utility to vessels of every kind coming in or going out of said Damariscotta river, or bound elsewhere.

After visiting Ram Island himself, Captain Smith submitted a report to the president of the Board of Navy Commissioners on June 2, 1837 that included the following:

[Boothbay Harbor] is well known as one of the most important harbors upon the whole coast. It is easy of ingress and egress, large, safe in gales from any point of the compass, deep, with good anchorage in any part of it. It is a harbor which all vessels bound east or west, when met by head winds or unfavorable weather, endeavor to make, being a sort of rendezvous for coasters; and more than 300 sail have been seen anchored there at one time. The question, then, is, what works will give to navigation the greatest facilities, and where shall they be placed?

Any one much acquainted with nautical affairs, sailing into [Boothbay] harbor from the west, and from it through the eastern passage, will be struck with the advantages a light at the entrance of the eastern passage would give; and there is no point, in my opinion, so well adapted to this end as Ram island. But when the fact is stated, that from that island there are in view four light-houses, and within the compass of twelve or fifteen miles seven lights, viz: Seguin, Pond island, Hendricks head, Burnt island, Pemaquid, Franklin island, and Monhegan, one of two conclusions seems to me inevitable: either that some of these lights are not judiciously located, or that no more are required in that vicinity. I am strongly inclined to the former conclusion. while the present lights are supported, it would not, I think, be judicious to establish another upon Ram island.

Acting on Smiths report, the Board of Navy Commissioners recommended the suspension of expenditures for Ram Island Lighthouse pending a more general examination of the areas lighthouses. Local fishermen were thus forced to take the lighting of Fishermans Island Passage into their own hands. After the first volunteer keeper of this private light left the area, Aldis McKay, a young lobsterman who had benefited from the light, took charge of its maintenance. To improve the beacon, McKay enclosed it in a glassed-in box that he weighted with rocks, so it wouldnt blow over.

Some say that there were and continue to be other less orthodox aids to navigation near Ram Island. The form of a ghostly White Woman is said to have saved many lives by appearing with a light to warn ships of danger. Some report seeing her in a burning boat or on a nearby reef, and even accompanied by lightning. But all describe her as a glowing form frantically waving them off the perilous rocks in the area. One captain reported hearing a fog whistle that saved him during a blizzard, even though there has never been such an aid on Ram Island. Another saw a burning boat that caused him to quickly change direction, however the next day, there was no sign of the vessel.

It was not until August 7, 1882, forty-five years after Captain Smiths report, that Congress approved $25,000 for an official light station to guide mariners through Fishermans Island Passage. The government had acquired four acres on Ram Island on July 15, 1837, when it first considered a lighthouse for the passage, so construction could start right away in the spring of 1883. A thirty-five-foot-tall cylindrical tower, which consisted of a substantial granite foundation, a brick central portion, and a cast-iron lantern containing an L. Sautter, fourth-order Fresnel lens, was built atop an offshore ledge and linked to the island with a foot-bridge. The station also included a keepers dwelling, fuel house, boathouse, and landing.

Samuel John Cavanor, who earned $540 annually and had previously served as an assistant keeper at Seguin Island, exhibited Ram Island Light for the first time on November 5, 1883. Before becoming a keeper, Cavanor served aboard the lighthouse tender Iris, where one day his leg was crushed by a buoy that was being hauled aboard. Cavanors leg had to be amputated, but that didnt slow him down. William K. Larkin Jr., a lighthouse service machinist who regularly called at Ram Island, considered Sam to be the most active keeper downeast, in spite of his peg leg.

Ram Island Light was originally fixed white, with two red sectors indicating the clear passages in the vicinity, but on October 1, 1889, the colors were reversed so that white sectors marked the safe approaches and red warned of danger.

The stations walkway was damaged on January 18, 1903, when the schooner Harriet W. Babson, returning from Newfoundland with a load of salt herring, grounded on Ram Island. The light was dark for the next few nights, as Keeper Cavanor couldnt reach the tower to refuel the lamp until the walkway was repaired.

Even the presence of a light station was not enough to curtail the destruction of ships near Ram Island during storms. Keeper Cavanor wrote on December 6, 1884 that after the schooner Mineola ran aground on nearby Squirrel Island, it was a totle rack [sic]; the schooner Garland went ashore in 1885, and nearly every year brought another disaster.

As for the station itself, a driving hailstorm, not long after the light had been established, smashed the lantern glass and put out the light, forcing Cavanor to plug the broken panes with newspaper to ensure the light stayed lit. Another storm swept away the stations boat in 1885, while yet another in 1898 knocked the fog bells weight box from the tower. (A 1,000-pound fog bell had been suspended from the seaward face of the tower in 1897.) In 1900, the islands only three trees were flattened during a gale.

The Cavanors purchased a home in Boothbay Harbor for their retirement, but before they could enjoy it, Keeper Cavanor died of a heart attack near the towns Congregational Church on April 10, 1913. An article in the April 12 Boothbay Register carried the following on the Cavanors: Probably no family in this vicinity were more attached to each other living all those years together on the little island surrounded by every comfort making them all and all to each other.

Captain O. G. Reed, one of Boothbay Harbors old salts, took temporary charge of the light on Ram Island until Almon Mitchell was made keeper on May 10, 1913. Keeper Mitchell had a lengthy career as a keeper, starting as an assistant keeper at Great Duck Island in 1898 and then serving as an assistant at Libby Island and Lubec Channel, before serving as a head keeper at both Petit Manan and Franklin Island. Keeper Mitchells wife Ida died in 1907, after the couple had eleven children. Keeper Mitchell remarried in 1912 and had five more children, the youngest of whom was just two when Keeper Mitchell died of heart failure in 1925 at the age of sixty-eight.

On July 7, 1939, with WWII looming for the United States, the Coast Guard took over the Lighthouse Service. At certain lighthouses, including Ram Island, when the civilian keeper went on leave, a coastguardsman would step in for him. The salary in the Coast Guard in those days was $60 a month, recalled Shirley Morong, wife of a coastguardsman. Our house rent was $8 a month until we moved to a house that had electricity when it was raised to $12 with $2 paying the electric bill.

Not long after Keeper Ralph Norwood transferred to Ram Island in early 1945, he rowed to the mainland with his two sons only to me welcomed by men armed with loaded shotguns. Turns out a skittish neighbor had called the police and FBI to report that German spies were coming ashore.

Ram Island Lighthouse was automated in 1965. A decade later, the Fresnel lens was stolen from the unattended lighthouse, but it was later recovered and is now on display at the Boothbay Regional Historical Society. A modern foghorn replaced the fog bell in 1972, and in 1977 the Coast Guard completed repairs at the station, which totaled $44,000. As part of the work in 1977, the badly deteriorated walkway leading to the tower was removed.

After automation, the station was offered to the town of Boothbay, but the expectation of large maintenance costs deterred the town from accepting the property. With no resident keeper, the station fell victim to vandalism and neglect. When the Coast Guard announced its decision to demolish the keepers house in 1983, Grand Banks Schooner Museum Trust stepped forward and leased the station. The Ram Island Preservation Society was formed and repairs began. The trust was granted ownership of the site in 1998 through the Maine Lights Program, while the Coast Guard retains responsibility for just the active navigational light itself. In 2002, the trust installed a new walkway to the tower, which, besides restoring the original look of the station, simplifies maintenance of the tower by the trust and servicing of the light by the Coast Guard.

For a larger map of Ram Island Lighthouse, click the lighthouse in the above map.

A distant view of the lighthouse can be had from land by taking Highway 27 south from Highway 1 on the east side of the Sheepscot River. Follow Highway 27 for roughly 11 miles and then turn east on Highway 96 just before Boothbay Harbor. Take 96 for six miles to its end in Ocean Point. You can see the lighthouse from the road which hugs the shore in Ocean Point.