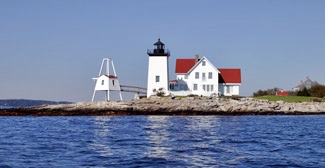 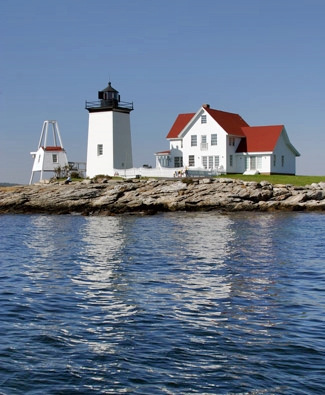 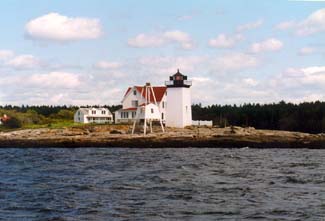 Hendricks Head Lighthouse was erected on the western side of Southport Island in 1829 by Joseph Berry to guide vessels up the Sheepscot River to the shipbuilding center at Wiscasset Harbor. The original lighthouse, built at a cost of $2,662, consisted of a rectangular stone dwelling with a wooden octagonal tower protruding from one end of its pitched roof. The lantern room was of the old birdcage design, featuring a multitude of small glass panes separated by wide metal muntins. John Upham first lit the towers eight lamps, which were set in fourteen-inch reflectors, on December 1, 1829. I.W.P. Lewis visited the lighthouse in 1842 and provided the following information on it:

Hendricks head is a small promontory on the west side of Townsend harbor, at the mouth of the Sheepscot river. The uses of this light may be considered as prospective, for the present amount of navigation in the river hardly authorizes the expense of maintaining a light here. The character of the light (fixed) is highly objectionable, from its contiguity to Burnt Island light; which is similar, and this fact has already caused sad disasters and the loss of numerous lives, on being mistaken for the other. The light should be altered to a reciprocating one, if continued, with one lamp, properly fitted.

A fifth-order Fresnel lens was installed at Hendricks Head in 1857, changing the light from fixed to a white flash every sixty seconds, but that still didnt prevent mariners from confusing the two lights. According to a newspaper account in October 1879, the schooner Leader, mistook Hendricks Head light for that of Burnt Island, and struck on Green Island, near Southport, and sunk. The captain and crew effected a safe landing in a boat at Southport.

The Annual Report of the Lighthouse Board for 1875 noted [Hendricks Head Lighthouse] is now in such an advanced state of dilapidation and decay that it has become uninhabitable, and new buildings are being erected, to be paid for from the general appropriation for repairs of light-houses. The new forty-foot-tall tower was square, built of brick, and was detached from a one-and-a-half-story keepers dwelling which measured twenty-two by thirty-one feet. Other buildings at the station included a boathouse and barn. The Annual Report for 1891 recorded that a pyramidal skeleton frame tower, built of yellow pine, had been bolted to the ledge near the dwelling to house a 1,200-pound bell and striking machinery. The bell, which was struck once every twenty seconds during thick weather, was placed in operation on July 15, 1891. A brick oil house was added a few years later.

Jaruel Marr was appointed keeper of Hendricks Head Lighthouse in 1866 to compensate him in part for injuries he sustained while fighting in the Civil War. Jaruel had walked sixty miles to Portland to enlist in the Union Army, leaving his wife Catherine and three children behind. During the conflict, he was wounded and incarcerated in a Confederate prison in Virginia, where he was nursed back to health by a fellow-prisoner and Union Army doctor named Wolcott. To honor the doctor, Jaruel and his wife named their next child Wolcott.

It was purportedly during the service of Jaruel and Catherine Marr that the now controversial story of the Baby That Washed Ashore occurred. The story goes that during a blinding snowstorm around 1870, a schooner ran aground on a rocky ledge just seaward of the lighthouse. Unable to launch their dory due to the turbulent waters crashing on the shore, the keeper and his wife watched helplessly as the panicked crew clamored up the rigging of the doomed vessel, which was soon broken to pieces by the towering waves.

In the off chance that someone had survived the wreck, the keeper built a bonfire on the shore and diligently scanned the waters for signs of life. An hour or so after darkness fell, the keeper noticed a bundle being buffeted towards the lighthouse. Wading into the icy waters, the keeper retrieved what turned out to be a pair of feather mattresses protectively lashed around a box. Using his sheath knife, he quickly cut the ropes and discovered a terrified, screaming baby girl inside the box along with a note committing the infant into Gods hands.

In 1997, Barbara Rumsey of the Boothbay Region Historical Society wrote a two-part article for the Boothbay Register in an attempt to debunk this popular story that was printed by Edward Rowe Snow in his 1945 work, Famous Lighthouses of New England. Though Rumseys logic is quite convincing, descendants of Jaruel and Catherine Marr claim that the story is true and that the name of the baby girl, later adopted by a doctor and his wife who were summer residents of the area, was Seaborn.

Keeper Jaruel Marr and his family moved into the new keepers dwelling on September 30, 1875 and were thrilled with their new cook stove. All three of the Marrs sons that reached adulthood followed in their fathers footsteps as lightkeepers. All three sons served at the Cuckolds before finishing their careers at other stations. Wolcott, the middle of the three sons, served at Cape Elizabeth and the Cuckolds before returning to Hendricks Head to replace his retiring father. On July 1, 1855, Wolcott Marr recorded the following in the Hendricks Head logbook: Arrived at this station at 2 PM to relieve Mr. Jaruel Marr, who has been keeper here for the past 29 years.

The Lighthouse Keeper was responsible for all maintenance of buildings, grounds and equipment, as well as very frequent inspections of the lamp during the night and times of foul weather. My grandfather also found time to fish, lobster, dig for clams, garden and take summer visitors for boat rides around the nearby islands. In addition, in winter months he fashioned fine pieces of furniture, utensils, and tools... This was permissible as long as someone was on duty at the light. If needed, he could be summoned by my grandmother or uncles by ringing the bell, which could be heard for miles.

Furniture making must have run in the family, and a cabinet fashioned by Jaruel Marr is on display at Hendricks Hill Museum in Southport. Wolcott served as keeper at Hendricks Head until 1930 when he passed away at the age of sixty-one due to acute bleeding of stomach ulcers.

Charles L. Knight was appointed keeper following the death of Wolcott Marr and served until the light was discontinued as a cost-savings measure in 1933. On a blustery night in 1932, Shep, a dog belonging to Charles son, caused quite a stir with its loud and persistent barking in the dwellings kitchen. When the dog was let out, it raced to the shoreline and continued its frantic barking. As nothing could be done to quiet the dog, Keeper Knight was convinced something was amiss offshore and decided to ring the fog bell as an alarm. Hearing the bell, the occupants of two nearby powerboats scanned the waters looking for anyone in distress. A couple adrift in a rowboat, having lost their oars, was soon located and rescued before they would have drifted out into the open sea. Recognizing the dogs role in the rescue, the Anti-Vivisection Society of New York later awarded Shep a bronze medal.

After being discontinued, the lighthouse and surrounding land was sold to Dr. William P. Browne of Connecticut in 1935 for $4,100. When electricity reached the area in 1951, Dr. Browne allowed the Coast Guard to automate and recommission the light. A ferocious winter storm in January of 1978 destroyed the boathouse along with the walkway that linked the dwelling to the fog-bell tower. In 1979, the towers fifth-order Fresnel lens was removed in favor of a modern optic. The lighthouse remained in the Browne family until 1991, when it was sold to Ben and Luanne Russell of Alabama for $850,000. Mary Charbonneau, daughter of William Browne, spent summers at the lighthouse as a child, and then she and her husband winterized the dwelling in 1976 after deciding to live there year round. Mary said selling the lighthouse was like cutting off her own arm, but she knew she couldnt live there forever.

The Russells are lighthouse buffs and have built a replica of Plymouth Lighthouse at their lake home in Alabama. By 1993, the couple had renovated all of the structures on Hendricks Head, creating a pristine, picture-perfect light station.

For a larger map of Hendricks Head Lighthouse, click the lighthouse in the above map.

Public cruises that pass the lighthouse are offered by the Maine Maritime Museum out of Bath and Cap'n Fish's out of Boothbay Harbor.


In 1735, Nathaniel Hendrick, swapped his land holdings in Arundel, Maine for property on Southport Island, an act that was later certified via a deed at Pemaquid in 1748. The name Hendrick lives on in various features on the island including a harbor, a hill, a road, a head, and a museum, even though the Hendrick family of Southport history departed long ago. It is believed that Nathaniel Hendrick built the dwelling still in use at the head of the cove, near the Southport General Store.