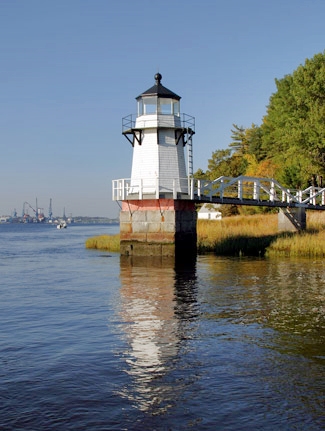 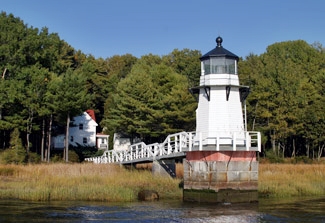 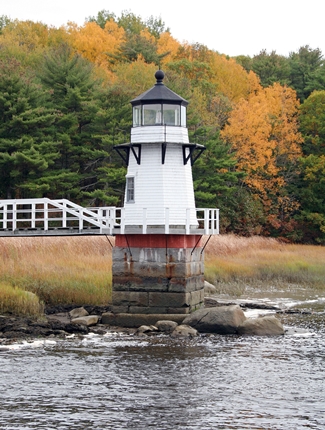 The first English-speaking settlement in what became the United States was attempted near the mouth of the Kennebec River in 1607, over a decade before the arrival of the Mayflower. The first recorded visit of a European to the region was by David Ingram, who claimed to have walked from Florida to New Brunswick and stopped near the Kennebec in 1582. Though perhaps hard to imagine today, at one time the Kennebec River was a very busy waterway as evidenced by the river traffic report contained in the following Bath Daily Times story of July 1880.

Yesterday on the passenger steamer Henry Morrison, we counted 27 schooners at Bath, 13 more between Bath and Richmond, 55 more between Richmond and Hallowell, and two more docking at Augusta.

The U.S. Lighthouse Establishment had no lights on the river at that time. Instead, the Kennebec Steamboat Company and towboat companies maintained lights at turning points and other difficult places along the river. In 1892, the Lighthouse Board acknowledged the need to increase aids to navigation on the Kennebec and recommended the establishment of five official lights, including one at Doubling Point across from the historic shipbuilding town of Bath, using the following evidence:

There were 3,137 arrivals of vessels in this river during the year, not counting the steamers which ply daily. The steamers Kennebec, 1,652 tons, and Sagadahoc, 1,413 tons, made ninety-six round trips each from Gardiner to Boston. Other passenger steamers ply on the river from Bath to Augusta, Boothbay, and Popham Beach, and intermediate places. The number of passengers carried was 232,150. Seventeen tugs were engaged on the river in towing. Thirty-nine vessels of 32,063 gross tons were built on the river, valued at $50 per gross ton, or, say, $1,603,150. The vessels arriving will average 450 tons. Some 24 feet draft can be carried to Thwings Point, 6 miles above Bath, 16 feet draft from Thwings Point to Gardiner, and 8 feet from Gardiner to Augusta. The Kennebec River is kept open by the towboats during the winter from Bath to the sea. Above Bath the buoys are taken up about November 20, and the river is likely to freeze at any time after this date. The ice usually goes out early in April. The river not only has the sea fogs, which extend to Bath, but its own river fog or mist, which is dense and at times low down. On dark nights it is sometimes impossible to tell where the water ends and the shore begins. The Light-House Establishment maintains no lights or fog signals in the Kennebec, but the Kennebec Steamboat Company and the towboat companies have united for many years in maintaining lanterns hung on the buoys at turning points or other difficult places.

The Lighthouse Board requested funds for construction of the five lights, and Congress provided the needed $17,000 for these lights on March 2, 1895.

In September 1899, the tower was moved 532 feet to its present offshore location atop a granite pier at the end of a 130-foot-long footbridge extending over a marsh and out into the Kennebec River. At the same time, the fog bell was mounted on the lighthouse tower and the fog striking mechanism was placed in the base of the lighthouse. The towers original foundation is still visible on a rock ledge at the eastern edge of the lighthouse grounds. As a result of the move, the focal plane of the light above the river was reduced from thirty-three to twenty-five feet.

In 1901, a boathouse was added to the station, using a $1,620 appropriation received the previous year, and the dwelling was moved closer to the tower and placed atop a new cellar. The old bell tower was also relocated and converted into a fuel house. A fifth-order Fresnel lens replaced the original lens lantern in 1902, and a brick oil house was built on the grounds in 1906.

In the mid-1970s a 300mm modern optic replaced the Fresnel lens in the Doubling Point Lighthouse. The Fresnel lens is now on display at the Maine Lighthouse Museum in Rockland, Maine. The fog bell was removed in 1980, and its location is unknown. The catwalk was rebuilt in 1985, and in 1998, Friends of the Doubling Point Light, a non-profit corporation, was granted stewardship of the lighthouse as part of the transfer of lighthouses under the Maine Lights Program.

For years, ice floes had rushed down the Kennebec River each spring, crashing into the lighthouses granite-block foundation, which was held together by large metal staples. By 1999, the staples had long since rusted away, and the abuse had caused the foundation to become so unstable that it was feared the tower might soon topple into the river. Friends of the Doubling Point Light raised $25,000 from donations sent in from all over the country. This sum was matched by a grant from the Kurt Berliner Foundation of New York, permitting the Friends to hire a local construction company, Reed and Reed, to repair the foundation.

A small crowd, made up of supporters, a TV crew, and reporters, assembled near the lighthouse on December 10, 1999 to watch the removal of the tower. The five-ton structure was lifted skyward by a crane, and after dangling over the Kennebec River for a few moments as the crowd held its collective breath, the tower was carefully placed on a waiting barge without incident. The lighthouse was then towed upriver to its temporary home at the construction companys yard in Woolwich, Maine. Working in frigid conditions, the contractors inserted stainless steel rods in the six-ton granite blocks, placed them back in position, and filled the foundation with concrete. A cap of red concrete, molded to resemble bricks, was placed atop the granite blocks, and on January 5, 2000, the tower returned home.

James Spencer, president of Friends of the Doubling Point Light when the granite base was restored, is related to Amy Thurston, who originally purchased the dwelling from the government, and the dwelling passed to him many years ago.

Doubling Point Lighthouse was automated in 1988 and remains an active aid to navigation, showing a flashing white light every four seconds. The lighthouse is listed in the National Register of Historic Places.

For a larger map of Doubling Point Lighthouse, click the lighthouse in the above map.

Public cruises that pass the lighthouse are offered by Maine Maritime Museum out of Bath and Capn Fishs out of Boothbay Harbor.

To visit the lighthouse by land, from Highway 1 on the east side of Kennebec River turn south on Highway 127 (Five Islands Road) and drive for 1.8 miles to Whitmores Landing Road. Turn right onto Whitmores Landing Road and continue 0.4 miles and then turn left onto Doubling Point Road. Follow Doubling Point Road to its end where you will find the limited public parking for visiting the lighthouse.

The fifth-order Fresnel lens from Doubling Point Lighthouse is on display at the Maine Lighthouse Museum in Rockland, Maine.

The lighthouse is owned by Friends of Doubling Point Light, while the dwelling is privately owned. Grounds open, dwelling/tower closed.


During our tour of the lighthouses of the Kennebec River, we were told that a boater left Bath on the morning of December 10, 1999 and headed downriver, noting Doubling Point Lighthouse on his way. When he returned upriver later on that winter day, he was alarmed to notice the tower was no longer there. He hurriedly called those responsible for the light to inform them of the loss, only to find out that the tower had been removed during the day so its foundation could be repaired.