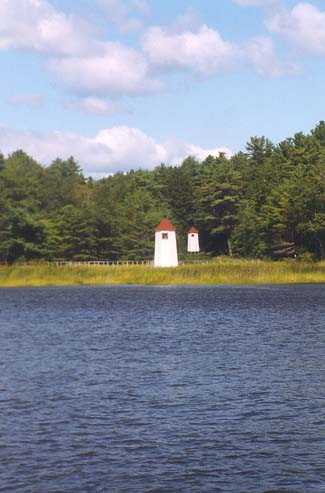 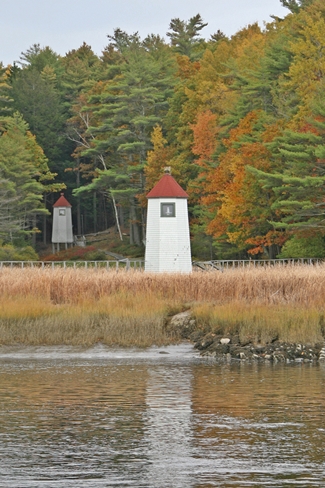 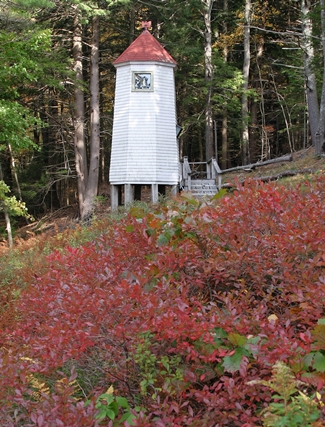 Doubling Point Range Lights (also known as Kennebec River Range Lights) are located on Arrowsic Island at an important point in the Kennebec River. The lights are positioned at the end of a long, straight section of the river, and when mariners keep the two lights positioned one above the other, they are certain to be in the center of the channel. As a vessel coming upstream nears the lights, the river makes a 90° turn to the west, and then after a half mile another 90° to resume its course north  hence the name Doubling Point. Doubling Point Lighthouse marks the entrance to this tricky double bend in the river for vessels coming downstream. The Annual Report of the Lighthouse Board for 1892 provided the following motivation for five lights on Kennebec River, including lights at Doubling Point:

There were 3,137 arrivals of vessels in this river during the year, not counting the steamers which ply daily. The steamers Kennebec, 1,652 tons, and Sagadahoc, 1,413 tons, made ninety-six round trips each from Gardiner to Boston. Other passenger steamers ply on the river from Bath to Augusta, Boothbay, and Popham Beach, and intermediate places. The number of passengers carried was 232,150. Seventeen tugs were engaged on the river in towing. Thirty-nine vessels of 32,063 gross tons were built on the river, valued at $50 per gross ton, or, say, $1,603,150. The vessels arriving will average 450 tons. Some 24 feet draft can be carried to Thwings Point, 6 miles above Bath, 16 feet draft from Thwings Point to Gardiner, and 8 feet from Gardiner to Augusta. The Kennebec River is kept open by the towboats during the winter from Bath to the sea. Above Bath the buoys are taken up about November 20, and the river is likely to freeze at any time after this date. The ice usually goes out early in April. The river not only has the sea fogs, which extend to Bath, but its own river fog or mist, which is dense and at times low down. On dark nights it is sometimes impossible to tell where the water ends and the shore begins. The Light-House Establishment maintains no lights or fog signals in the Kennebec, but the Kennebec Steamboat Company and the towboat companies have united for many years in maintaining lanterns hung on the buoys at turning points or other difficult places. The above facts establish, in the Boards opinion, the necessity for and advisability of increasing the aids to navigation in the Kennebec River, and it recommends the establishment of the following-named lights:

At Doubling Point a red lens-lantern light, showing up and down the river, with a fog bell, and one-half mile east of the point, white range lights, not less than 500 feet apart, to mark the channel from Ram Island to Fiddlers Reach, at an estimated cost of $6,300.

The other lights on the river were to be placed at Ames Point, Perkins Island, and Squirrel Point.

Built in 1898 after Congress provided $17,000 three years earlier to light the river, the two white octagonal wooden towers adorned with a red roof are of similar design. The front light is twenty-one feet tall with a focal plane of eighteen feet, while the rear light tower, located 235 yards farther inland, is eighteen feet tall with a focal plane of thirty-three feet. The characteristic of both lights, which show through a small window in the towers, was originally fixed white. A two-story wooden keepers dwelling and a barn were also built in 1898, along with raised wooden walkways to link the towers to the dwelling. Within the next five years, a boathouse and brick oil house were added to the station.

Edward H. Pierce, the first keeper of the range lights, had previously served at Halfway Rock Lighthouse and Cuckolds Fog Signal. During his time at Doubling Point, he was recognized for assisting a pair in a disable power boat in 1913 and for rescuing from drowning an insane man who jumped from a wharf at nearby Bath on October 6, 1916.

In 1912, the Ransom B. Fuller, a passenger steamer that operated between Boston and Bath, ran aground in foggy conditions just west of Doubling Point Range Lights. To prevent similar occurrences, a 1,200-pound fog bell was installed the following year in a pyramid-shaped wooden tower near the site of the mishap. The tower was known as Fiddlers Reach fog signal. The Coast Guard removed the bell from the tower in 1972 and later placed it on display at the Coast Guard Academy in New London, Connecticut.

The sharp bend in the river where Doubling Point Range Lights are located can be very difficult for ships over 600 feet in length to navigate safely. Newly commissioned vessels leaving nearby Bath Iron Works often fall into this category, and passage through the area is a good first test for a ships rudders, not to mention the pilots skills.

One of the best-known keepers at Doubling Point Range Lights was a retired skipper named Captain Harry L. Nye, who retired from the sea in 1914 to become a lighthouse keeper, first at Seguin Island and then at Doubling Point. During his tenure at the range lights, Nye rescued a number of boats that became stranded on the rocks near the lights.

His most spectacular rescue came on December 28, 1927. Four young men were playing on the ice at the mouth of the Sasanoa River, about a mile upstream near the city of Bath, when a large block of ice broke loose. Carried by a strong tide, the ice floe moved quickly downriver toward the open sea with the four boys on top of it. Nye managed to get his boat out in the river, intercept the ice floe, and rescue the four boys. Earlier that year, Nye rescued three people from a disabled motorboat that drifted onto rocks near the range lights. Keeper Nye was awarded the efficiency flag for having the model station in the district in both 1925 and 1930.

Keeper Harold L. Kilton was profiled in an article in the August 1948 issue of Maine Coast Fisherman. The article stated:

Mr. Kilton lives, with his wife, at the Range Lights dwelling, the Doubling Point dwellings having been sold off some years ago. From there he attends to the two octagonal towers known as the range lights, at the lower end of Fiddlers Reach in the Kennebec. Up the reach some 1075 feet and reached by two bridges on a path along the ledges is the Fiddlers Reach fog signal, and at the upper end of the reach, a half mile from the dwelling is the Doubling Point lighthouse and bell.

Mr. Kilton has been on the station for three years, being a civilian keeper, and thoroughly enjoys it. The whole place was in apple-pie order with a neatly-cut lawn sloping off to an eye-catching view down the Kennebec. He doesnt seem to be worried about slogging over to Fiddlers Reach fog signal to wind his bell every four hours in fog and snow. As for the trip to Doubling Point when things go wrong in the winter  he snowshoes.

Although situated on Arrowsic Island and within reach of power lines, the station generates its own electricity with an 11 volt Kohler power system charging into a bank of batteries.

Dan and Karen McLean first met in 1978 when they were both serving in the Coast Guard at Gloucester, Massachusetts. Two years later, they married, which meant they could no longer serve in the same unit. Dan left the Coast Guard in 1980, and Karen was going to do the same when her four-year term ended in 1982. However, the Coast Guard was reluctant to see her leave and offered her the Doubling Point Range Lights, where she would live and oversee the range lights as well as the lights and fog signals at Doubling Point and Squirrel Point.

The McLeans relocated to the station in February 1982. Getting to Squirrel Point was no simple chore, involving a short drive and a one-mile hike. In winter, the couple often used cross-country skis to reach the station. In 1984, Dan re-enlisted in the Coast Guard and was assigned to Station Boothbay Harbor. Two children were born to the McLeans while Karen was in charge of the station, then in 1987, Dan took over as officer-in-charge, and Karen was assigned to Group South Portland.

In 1998, under the Maine Lights Program, Doubling Point Range Lights became the property of a nonprofit group called The Range Light Keepers. The group restored the fog bell tower, which included installing new sills and a new floor, and then worked on equipping the tower with a bell and clockwork striking mechanism. The Coast Guard provided a bell, similar to the one used at the tower, and the Maine Maritime Museum located a Stevens striking mechanism. The bell was displayed at Arrowsic Town Hall for several years until the striking mechanism was restored, allowing the bell and striker to be placed on display at the Maine Maritime Museum. In May 2016, the fog bell was finally mounted on the beam projecting from the tower at Fiddlers Reach, forty years after the last fog bell was removed from the tower.

Located on Arrowsic Island at the head of a straight section of the Kennebec River, where ship traffic bound up the river to Bath makes a sharp left.
Latitude: 43.88286, Longitude: -69.79567

For a larger map of Doubling Point Range Lighthouse, click the lighthouse in the above map.

Public cruises that pass the lighthouse are offered by Maine Maritime Museum out of Bath and Capn Fishs out of Boothbay Harbor.

To visit the lighthouses on land, from Highway 1 on the east side of the Kennebec River turn south on Highway 127 (Five Islands Road) and drive for 1.8 miles to Whitmores Landing Road. Turn right onto Whitmores Landing Road and continue 0.4 miles and then turn left onto Doubling Point Road. Take the next left, which is after about 750 feet, and follow this road to its end where there is a path to the lights. The path starts on the sidewalk at the house next to the parking area, and visitors are urged to remain on the path.

The lights are owned by The Range Light Keepers, while Coast Guard personnel still live in the dwelling. Grounds open, dwelling/towers closed.