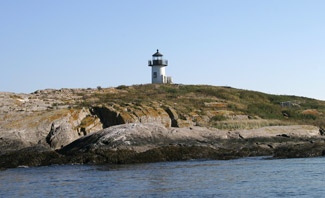 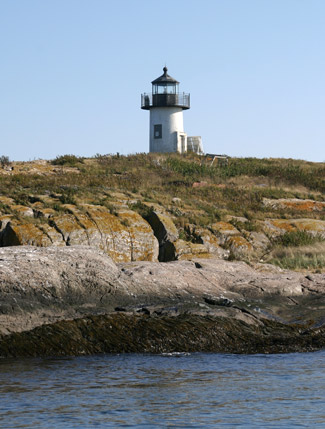 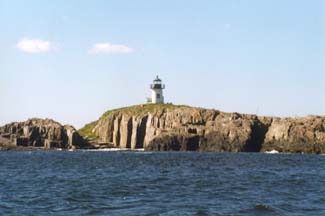 Ten-acre Pond Island is located on the western side of the entrance to Kennebec River. On the ocean side of the island, cliffs rise precipitously to a height of sixty feet or more, but the island tapers down to the west, where in calm seas it is possible to make a landing.

On March 31, 1821, Congress appropriated $10,500 for the construction of three lighthouses in Maine: on Cross Island near Machias, on Burnt Island near Boothbay Harbor, and on Pond Island at the mouth of Kennebec River. The first Pond Island Lighthouse was a conical stone tower, likely similar to Burnt Island Lighthouse that was constructed at the same time and which is the second oldest standing lighthouse in Maine. A light on Seguin Island, situated two miles farther offshore from Pond Island, had been constructed a quarter century earlier, but an additional beacon was needed to more adequately mark the mouth of Kennebec River. The lights along the shores of Kennebec River would not be erected until the end of the nineteenth century.

How Pond Island received its name is not known, but it is certainly not for any sizeable body of water found on the rocky mass. In 1823, Keeper Samuel Rogers petitioned the government for a well or cistern at the lighthouse: I am the keeper of the Light House on Pond Island at the entrance to the Kennebec River and live on the same Island. I suffer great inconvenience on account of having no means to obtain fresh water but by transporting it from the mainland. It is usual I am told to have a well or Cistern on the Islands where Light Houses are placed. The keepers plea produced the desired result as Stephen Pleasonton, overseer of the Lighthouse Establishment, directed that a cistern be built on the island if water could not be obtained by digging a well.

Water wasnt the only resource lacking on Pond Island. In the 1880s, The New England Magazine was informed that the island provided sufficient pasturage for one cow, but upon closer observation, the magazine determined that the cow must be content with two meals a day, or get an occasional donation from the meadows on the mainland.

On more than one occasion, the keeper of Pond Island Lighthouse solicited an increase in salary due to the isolated nature of his position. An official familiar with island lighthouses of Maine noted that although Pond Island offered no wood or cultivatable land, the keeper has some advantage in entertaining the company that resort there in summer. The keeper at Seguin Island did receive a $50 raise, but it was felt that the salary of the keeper at Pond Island could not be raised without raising the salaries of several other island lighthouse keepers.

After visiting the island in 1842, I.W.P. Lewis gave the following description of the tower and associated keepers dwelling:

Tower of rubble masonry, thirteen feet high, laid up in bad lime mortar; base resting on the uneven surface of a ledge; roof of soapstone slabs; walls cracked, and stones loose in their beds; roof leaky. An iron band has been put around the tower, about six feet from the base, to hold the walling together. Wood work decayed; window frame loose in its seat. Whole structure requires rebuilding.

Dwelling-house of rubble masonry, three rooms on first floor, and two chambers in attic; roof shingled, and leaky in all directions; walls have been pointed with cement, but are open and cracked in many placed by frost; kitchen wall cracked off from body of house two inches; plastering off the ceilings in several places; floor beams rotten; cisterns rotten; boat worn out; chimney of brick has settled three inches, and there is a bad leak all round it; house and tower are built of mica slate, split from the adjacent ledge. The entire island is composed of this stone, which is entirely unfit for the construction of such buildings.

At the time of Lewis visit, eight lamps, set in thirteen-inch reflectors, were attached two circular iron frames in the center of the lantern room, with four lamps on each frame. Thanks mostly to the lofty bluff atop which the lighthouse was located, the light had a focal plane of fifty-five feet above mean high water.

An inspection report in 1850 noted that reflectors taken from the west lighthouse at Cape Elizabeth had been installed at Pond Island. A new tower and lantern room were recommended, as the tower was still cracked and the lantern room was very rusty.

The present Pond Island Lighthouse, a twenty-foot-tall, brick tower, was built in 1855, at which time it was also outfitted with a fifth-order Fresnel lens. The cylindrical tower was attached to a one-and-a-half-story, wooden keepers dwelling by a work shed, and was similar in design to Browns Head Lighthouse, which was built around the same time and retains its dwelling today.

In 1856, a newspaper noted that Point Island Light consumed just one pint of oil a night and that a new and valuable improvement (the Fresnel lens) magnified the slight flame so that the light could be seen by the mariner at a great distance. The widespread introduction of Fresnel lenses in American lighthouses following the establishment of the Lighthouse Board in 1852 increased the quality of the nations lights and reduced the amount of oil consumed at each station, as just one lamp was needed instead of a multitude of lamps. In 1850, Pond Island Light consumed 333 gallons of oil in a year, while if the newspaper account is accurate, the light was consuming just 46 gallons a year with the Fresnel lens.

On September 8, 1869, a hurricane swept along the coast of Maine uprooting trees and causing a great deal of damage to various structures. A newspaper in Portland called it the severest storm to strike that city, and in Bath damages were estimated to be between $25,000 and $50,000 (in 1869 dollars). On Pond Island, the hurricane blew down the pyramidal fog-bell tower, damaging the striking machinery. Not surprisingly, the bell escaped uninjured. In 1890, a new 1,200-pound bell made of bell-metal was hung in place of the old steel bell that was badly corroded.

Besides the lighthouse, dwelling, and fog-bell tower, Pond Island was also equipped with a boathouse located on the shoreward side of the island. In 1885, a frame fuel-house was built on the island and a new wooden cistern with a capacity of about 1,000 gallons along with fourteen feet of rain pipes were supplied for the keepers dwelling. A redbrick oil house was added in 1905, and that same year the bell house was rebuilt.

In the 1960s, the lighthouse was automated, and all of the stations buildings save the brick tower, were razed. Though many today consider this a tragic loss of historic structures, the removal of mans footprint has allowed the island, which was transferred from the Coast Guard to the Fish and Wildlife Service in 1973, to be re-established as a tern colony. Pond Island was home to a tern colony up until 1937, when an expanding gull population forced the terns from the island. With help from the National Audubon Society, a tern restoration effort was initiated on the island in 1996, through the removal of nesting gulls. Tern decoys were then deployed around the island, and tape recordings of a tern colony were played to entice nesting pairs of terns to the island. These efforts were rewarded in 1999 when the first common tern chick in more than sixty years was hatched on the island. In 2003, the first successful breeding pair of endangered roseate terns was documented on the island. The success of the restoration effort has attracted the attention of predatory great horned owls, which have limited tern productivity in recent years.

For a larger map of Pond Island Lighthouse, click the lighthouse in the above map.

The island and lighthouse are owned by the U.S. Fish & Wildlife Service and are part of the Maine Coastal Islands National Wildlife Refuge. The island is managed by the Audubon Society. Grounds open September through March, tower closed.


Pond Island Lighthouse is another one of those lighthouses that has appeared in a movie. In "Message in a Bottle," the lighthouse can be seen in the background as Kevin Costner navigates a sailboat near the island. As the residence used in the movie is located in Popham Beach, Pond Island Lighthouse can also be seen in the background during shots at the house. Shaw's Lobster Pound in charming New Harbor also appears in the film.