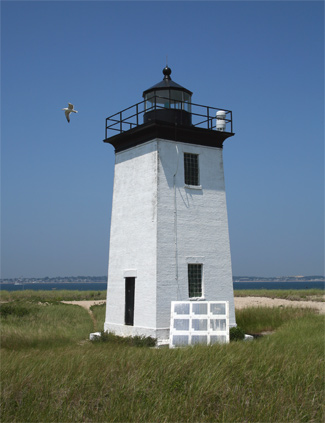 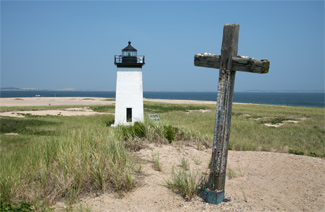 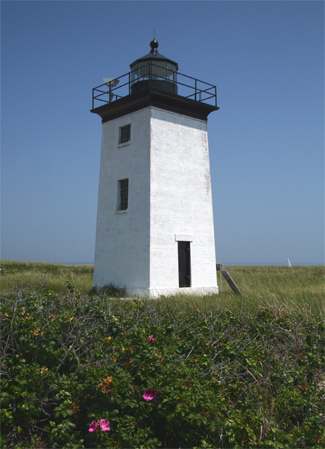 Provincetown Harbor, with its cold waters rich in marine life, has a long history of attracting fishermen despite the dangers that also lurked there. Starting around 3,000  2,000 B.C., Native Americans arrived (principally the Wampanoag tribe and their allies, the Nausets), followed, it is said, by the famous Vikings Leif Erikson and his brother Thorwald (1003  1007), and later, perhaps by Basque fishermen following the cod (prior to Christopher Columbus arrival in the New World). By 1818, there was a salt works and fishing settlement at Long Point, the tip of the hook that protects and defines the southern side of Provincetown Harbor. After a May 18, 1826 Act of Congress provided $2,500, four acres near the end of Long Point were purchased and a lighthouse put in service there the following year.

Long Point Lighthouse guided ships into the harbor and warned of a sandbar that extended seaward a quarter mile from the tip of the point. The light was exhibited from a short, octagonal tower centered atop the peaked roof of the wood-frame keepers house that was built on pilings sunk eight feet into the sand. The keepers house had three rooms on its first floor and bed chambers in the attic. As there were similar lighthouses of this style built on the cape during the early nineteenth century, they came to be known as the Cape Cod style. Unfortunately, no lighthouse of this design remains on the cape today.

Long Point Lights first keeper was Charles Derby (1826 1849), who first arrived in Provincetown in 1798, as the four-year-old ward of the captain of the whaling ship Polly. Starting in 1830, a school, the first at Long Point, operated at the lighthouse. It began with three students and expanded until it was replaced by another schoolhouse in the village in 1846.

This is an exceedingly useful light, but far larger than is necessary, noted Lieutenant Edward W. Carpender of the U.S. Navy in 1838. He recommended that four of the ten lamps, which were backed by fifteen-inch reflectors, be suppressed and added, This house was in danger from the sea until Government built a ledge, or breakwater, outside of it; since which, the keeper and his family have experienced less anxiety for their safety. The breakwater consisted of an enclosure of spruce logs around the dwelling that was filled in with sand and protected with 1,800 tons of large rock were placed around its perimeter.

Keeper Derby wrote in 1842 for I.W.P. Lewis lighthouse survey that he had no well and relied on rainwater collected in a cistern, and while he was allowed a boat, there was no landing or boathouse. That year Derbys boat was damaged in a storm and he spent $25 of his $350 annual salary to repair it.

In 1853, the year Keeper Derby left the lighthouse, it was noted that the east side of the beach south of the lighthouse had worn away, but since the deterioration appeared to be slow, no corrective measures were recommended.

A fifth-order Fresnel lens replaced the lamps and reflectors in 1856, and 1869 saw the illuminating apparatus and fixtures overhauled, cistern pump renewed and timepiece cleaned. As the extremity of the point where the lighthouse stood continued to wash away, it was conjectured in 1869 that it may be necessary at no distant day to move the light further inland. Little or no action seems to have taken place, because by 1873 the foundation of the keepers dwelling was exposed and the entire structure, which was by then resting on decayed piles, was in danger of being carried off by a heavy storm. A new dwelling and tower were deemed indispensable, and in 1874, $13,000 was approved for this work along with the addition of a fog signal.

The present square, brick tower was constructed in 1875 and was originally attached to a one-and-a-half story frame dwelling. A fog-bell tower was erected north of the tower and from it was suspended a 1,200-pound bell that was sounded by a striking mechanism.

From 1870 to 1882, John Thomas Dunham was employed as keeper of Long Point Lighthouse. Dunham was a Provincetown native fitted with a wooden leg as a result of a whaling accident.

During the winter of 1874-75, a giant, twenty-two-mile-long ice field engulfed Provincetown, stretching from Wood End to Manomet. A local historian described it as follows: A fleet of fishing vessels was caught in the floe and stood there; their hulls, rigging, and tapering spars encrusted with ice, like fairy vessels of glass. It was one immense crystalline desert with signals of distress fluttering from the immobile craft, a scene of perilous beauty and wicked enchantment.

In 1880, although the settlement at Long Point had shrunk considerably, Keeper Dunham was still greatly disturbed by the flies and stench coming from the nearby fish-oil works.

Erosion caused by storms in late 1898 and early 1899 looked poised to transform Long Point into an island. Of these storms, the Portland Gale was the worst. Keeper Samuel Soper Smith, who had been at the station since 1888, was sick when the November 26-27, 1898, Portland Gale hit. Despite his illness, Smith knew he must wind the fog-bell striking mechanism every few hours. Braving the storm, he was struck in the chest by a wave that flung him backward, but he continued climbing into the machinery building to wind the bell. Smith described the storm to the Boston Daily Globe in an 1899 article:

On the morning of Nov. 27 the whole end of the point was flooded. The buildings shook and cracked ominously under the push of the hurricane, but the greatest danger threatening was that of the waves. The air was full of water  salt water, blown like fog from the crests of the seas

The tide kept rising until at last it was four feet deep all around the house. My wife and a lady friend expressed their fear that our house would be swept away. I pointed to our outside water tank, an immense cask, nearly filled with fresh water, weighing a ton at least, which stood under the eaves and told them that they need not fear as long as it remained there. Just as I spoke it lifted, and next minute went around the corner of the house, upright, and it was carried around the sand battery, out of sight to the westward.

The house somehow survived, but the boathouse was damaged, wooden walkways swept away, the breakwater partially destroyed, the cistern filled with salt water, and the woodshed demolished. The 1899 Globe article described yet another storm, this one bringing out the heroism of Keeper Smiths wife. The keeper was ill on this occasion as well, and his wife would not permit him to leave the house when at the hurricanes worst point, the fog bell ceased to function. Mrs. Smith knew the fog bells bearings required lubrication, which had to be administered by clambering up a twenty-five-foot ladder outside the bell tower. Despite the winds efforts to pick her off the ladder, with nearly frozen fingers she managed to oil the mechanism so that the fog bell could continue to sound.

Other members of lighthouse keepers families faced regular difficulties, which they took in stride. Nine-year-old Mary was one of Keeper A.G. Ted Haskins three daughters, who lived with him and his wife at Long Point Lighthouse in the early 1930s. Every day she boarded a thirty-six-foot powerboat to travel over a mile to school and back. A 1932 Boston Globe article noted that in spite of foul weather Mary had not missed a single day of school in over a year.

One fog-choked day in May 1933, the fog bells striking mechanism gave out. Knowing the importance of the signal, Keeper Theodore Chase manually pulled the bell with his right hand the prescribed three times every minute for nine straight hours. He slept a few hours then returned to the task with his left hand. Although the fog cleared, Chase later proclaimed hed been ready to tie the rope to his legs to keep ringing, if necessary. He said he felt like a baseball pitcher who has twirled a couple of doubleheaders without rest.

Long Point Lighthouse was automated in 1952, and the fourth-order Fresnel lens, which had replaced the earlier lens in 1927, was replaced by a modern optic. In 1981 solar panels were installed.

Long Point Lighthouse is still active, with a fixed-green light and an automated fog signal. A brick oil house, dating from 1904 remains standing as well, but the keepers dwelling and fog-station building were removed long ago. There is a movement afoot to rebuild the keepers house and use it as a tourist attraction to connect people with their heritage. Overnight stays in the dwelling might even be offered.

You can view this lighthouse from Provincetown, but the view is a distant, unsatisfactory one. To visit the light, you can make the strenuous, 2.7 mile walk to the lighthouse, or you can take a shuttle or paddle a kayak to Long Point. Flyer's Boat Yard rents kayaks and also provides shuttle service to Long Point.

The lighthouse is owned by the Coast Guard but maintained by the American Lighthouse Foundation. Grounds open, tower closed.


As the name implies, the peninsula is quite lengthy and if you attempt to hike it in the heat of summer, make sure you have a hat, plenty of water, and are in good condition. The sandy dune near Long Point Lighthouse, atop which there is a wooden cross, was once home to Fort Useless, a defense post built during the Civil War. Residents of Provincetown called the two batteries built on Long Point Fort Useless and Fort Ridiculous.