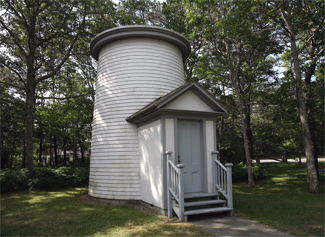 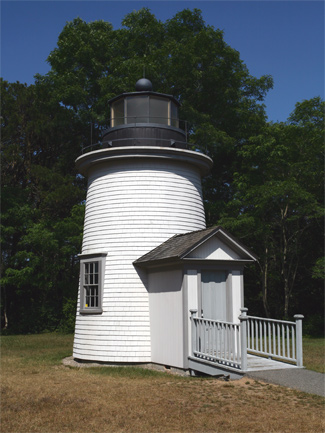 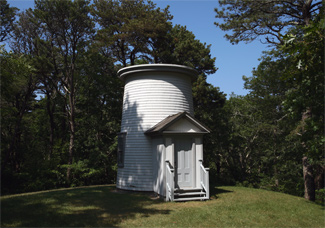 Set 150 feet apart in a straight line, the three fifteen-foot-tall brick towers at Nauset Beach became known as The Three Sisters of Nauset. The origin of this nickname is uncertain. Some say the name arose because the towers resembled demure ladies in white dresses with black hats, while others claim that it was due to the fact that Keeper Henry Y. Hatch (1851-1853) had three daughters. Over the years, the Three Sisters have been torn down, rebuilt, and sold off, but now the sisters are reunited just off Cable Road near Nauset Beach, where they stand stately in a row just west of their original location. The name Nauset or Nawsett, which came from a local Native American tribe, formerly referred to the fifteen-mile stretch of Cape Cod from what is now Brewster almost to modern-day Truro. One would think that when local residents appealed to the Boston Marine Society to build a light along this dangerous section of coast, with its changeable weather, blinding fogs, treacherous currents, and long history of wrecked vessels, that there would have been little or no opposition. That, however, was not the case.

There were those who actually stood to gain from the destruction of vesselswreckers. Lighthouses and their keepers interfered with the legendary local industry of mooncussing, wherein a lantern was tied to the tail of a white horse in order to lure unsuspecting mariners onto the beach. Luckily for mariners, support for the lighthouse prevailed over the avarice of the wreckers, and Congress approved $10,000 on March 3, 1837 for a light midway between Highland Light and the twin towers at Chatham.

Ralph Waldo Emerson visited the three lights in September 1854, when B.H.A. Collins was keeper, and recorded the following in his journal: Went to Nauset Light on the back side of Cape Cod. Collins, the light keeper, told me he encountered obstinate resistance to the project of building a lighthouse on this coast as it would injure the wrecking business. He had to go to Boston and obtain the strong recommendation of the Port Society. A newspaper article carrying Emersons journal entry likened the wrecking business to slavery: No matter how obnoxious a vested interest is morally, it knows how to fight [for its existence].

An unusual plan was devised to build not one, but three lighthouses at Nauset Beach on five acres atop Nauset cliffs. The land was purchased for $150 from Benjamin and Sally Collins of Eastham, after Captain John Mad Jack Percival (a Cape Cod resident who had commanded the USS Constitution) selected the location.

Even before the towers were first illuminated in 1839, Lieutenant Edward W. Carpender wrote on November 1, 1838, that he could not comprehend why three lights had been constructed. This is a clean, bold, regular coast; no port to be guided into by these lights, making it difficult, at first, to comprehend their use. Never having, before, seen any similarly located, I found it difficult to reconcile myself to them on any terms. They were, doubtless, given this triple appearance to distinguish them from Chatham lights, consisting of two towers similarly arranged. Nauset beach has always been considered a dangerous place for vessels, and many have been wrecked there. To guard against such disasters seems to be the object of these lights. I cannot, however, think that three lights are at all necessary. Any single distinguishable light that can be seen eight or ten miles will answer any purpose. Such a light is a revolving red light. Carpender was puzzled why the government would pay for 900 gallons of oil annually, when 300-360 gallons for a single light would suffice.

Winslow Lewis, who regularly underbid the competition, won the construction bid for the triplicate towers. His team consisted of four masons, three laborers, two carpenters, and a cook. Before completion, one mason and one carpenter were stricken by small pox.

David Bryant, a local carpenter, was hired by the local lighthouse superintendent for $2.50 a day to monitor the work. When he viewed masons laying bricks completely at random and shoveling sand instead of mortar between the towers double walls, Bryant refused to certify the stations proper construction. The three towers and a twenty by thirty-four-foot, two-story keepers house were erected for $6,549 in only thirty-eight days. Ten lamps, set in thirteen-and-a-half-inch reflectors, were used in each of the towers lantern rooms.

In an 1842 affidavit, Bryant stated that he considered the whole of the work as of the meanest character and description but finally agreed to sign the certificate of approval after being told Stephen Pleasonton, fifth-auditor of the Treasury, had accepted the work based on representations made by Lewis. Pleasanton, whose tight-fisted decisions are believed to have harmed lighthouses and perhaps cost the lives of some mariners, denied that he had been in contact with Lewis regarding the lighthouses and predicted that Bryant would be indicted, and probably punished, for perjury in this case.

Ironically, engineer I.W.P. Lewis (builder Winslow Lewis nephew) would harshly criticize the construction to Congress in 1842, stating that the bases of the towers rested on the sand without foundations and the towers were leaky and laid with bad mortar. Like Carpender before him, Lewis questioned the logic of three lights. Though no fault of Winslow Lewis, I.W.P. Lewis also found that the glass in the towers was so damaged by blowing sand that the light was almost completely obscured.

By 1850, when Joshua Crosby was keeper, the number of lamps in each towers octagonal iron lantern had been reduced from ten, to eight, and then six. Efficient sixth-order Fresnel lenses replaced the systems of lamps and reflectors in 1856, and in 1873, the lenses were upgraded to larger ones of the fourth-order.

Even though it had three lighthouses, the station was staffed by only one keeper up until 1867, when the position of assistant keeper was added. The assistant lived with the head keeper and his family in the stations one dwelling, and the Lighthouse Board noted the inadequacy of these accommodations in its 1873 report: The dwelling-house should be enlarged, or a small cottage built for the accommodation of the assistant keeper, as the building now occupied is entirely too small. Congress allocated $5,000 on March 3, 1875 for repairs and additions to the tower and keepers dwelling at Nauset Beach, and a new dwelling was erected in 1876. Nathan A. Gill, Jr. was head keeper of the lighthouses from 1869 to 1883, and two of his brothers and his father served with him until the position of assistant keeper was eliminated in 1882.

While Nathan A. Gill, Jr. was keeper, a French company laid a telegraph cable that ran from Brest, France to the island of Saint-Pierre off the coast of Newfoundland and then from there to Nauset Beach on Cape Cod. As the cable arrived at Nauset Beach a few weeks before the completion of a large building that served as the cable station, a portion of the keepers dwelling at Nauset Beach was used as office space, and it was there that the first transatlantic message sent across the cable was received on November 18, 1879. A small shingled shack, still standing near Nauset Lighthouse, is a remnant of the cable station.

Exterior flights of stairs, leading from the ground to the lantern decks, were added to the three towers in 1889.

After the relentless Atlantic Ocean brought the three brick towers to the brink of disaster, in 1892, three new twenty-two-foot-tall towers were constructed thirty feet west of the originals along with a brick oil house. Though it is a bit surprising that the use of three towers was continued, the replacements were at least constructed of wood so they could be readily moved. The fourth-order Fresnel lenses were transferred to the new towers on April 25, 1892.

The Portland Gale of November 26-27, 1898, so named because it sank the steamer Portland just north of Cape Cod, struck with such force that it actually moved two of the three towers at Nauset Beach. Nearly one month later, Keeper Stephen Lewis discovered the body of a man, uncovered on the beach by a new storm, whom he believed was one of the nearly 200 that perished aboard the Portland.

In 1911, the towers were again in danger of tumbling over the bluff (the northernmost tower was a scant eight feet from the edge) when government tests proved that the three lights could be effectively reduced to one flashing light. Although the use of three lights had been criticized for over seventy years, when the Three Sisters were reduced to a single tower that year, there were numerous complaints. One example, printed in the Boston Globe read, In thick weather, it could be impossible to count the flashes correctly, thus confusing it with other lights.

The two defunct towers (minus their lanterns) were auctioned off in 1918 to the Cummings family of Eastham for $3.50. The family moved the two towers to a nearby location and joined them together as a summer cottage called The Towers on Cable Road. Later, the building would be used as a dance studio.

The middle Sister (which was in the best condition) was moved back from the bluff and attached to the 1876 keepers dwelling.

When the westernmost of the twin brick-lined, cast-iron Chatham Lights was discontinued in 1923, it was relocated to Nauset Beach to replace the last of the wooden sisters, which by then was showing her age. The sisters fourth-order Fresnel lens, which produced three flashes every ten seconds in honor of the former three sisters, was installed in the replacement tower, referred to subsequently as Nauset Light or Nauset Beach Light. Albert Hall purchased the derelict Sister tower for $10 and incorporated it into a cottage.

Thus, the Three Sisters of Nauset effectively ceased to exist as a light station  that is until the National Park Service began steps to reunite them. The Park Service first acquired the two 1892 wooden towers that had been sold to the Cummings family in 1965, and then, ten years later, successfully negotiated the purchase of the third tower from the Hall family.

In 1983, the National Park Service placed the Three Sisters of Nauset in a park setting, 1,800 feet west of Nauset Light, where visitors will find them lined up in their original configuration, a straight line with 150 feet between towers. Following a $500,000 restoration completed in 1989, Cape Cod National Seashore now cares for the Three Sisters.

For a larger map of Three Sisters Lighthouse, click the lighthouse in the above map.

Take Route 6 north on the cape to Eastham and Bracket Road, the third traffic signal from the Eastham/Orleans rotary. Turn right onto Bracket Road and continue until it ends at Nauset Road. Turn left onto Nauset Road and then take the first right onto Cable Road. At the end of Cable Road, turn left onto Ocean View Drive where there is a parking lot available at Nauset Light Beach. The Three Sisters are located about a third of a mile west of Nauset Lighthouse. The Cape Code National Seashore website lists tours of the Three Sisters Lighthouses under Ranger-guided Activities.

The towers are owned by the National Park Service. Grounds open, towers open during tours.