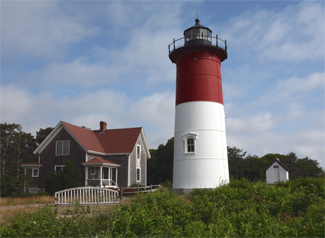 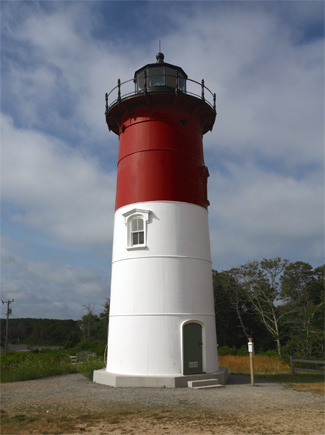 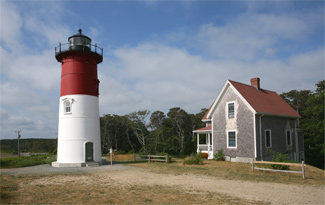 In addition to its role as an active light for mariners, picturesque Nauset Lighthouse is the iconographic symbol of Cape Cod. The lighthouse has been immortalized in a painting by Edward Hopper and is now a poster child for local fundraising. For $100 every two years, residents may purchase a vehicle license plate with an image of Nauset Lighthouse to benefit special projects on Cape Cod and the Islands. You may also find Nausets distinct red and white tower gracing bags of potato chips and popcorn in your local supermarket. Nauset Lighthouse is located on Nauset Beach off Cable Road, in Cape Cod National Seashore near Eastham, Massachusetts. The history of Nauset Lighthouse is inextricably linked with both the Three Sisters Lights of Nauset and the Chatham Lights. In 1923, the single remaining tower of the Three Sisters Light Station had deteriorated to the point where repairing it was senseless. This roughly coincided with the early twentieth century decision to reduce all wasteful twin lights to a single light. Thus, it was logical to move the northernmost of Chathams twin towers to Nauset Beach where it would replace the last Sister.

The forty-eight-foot-tall, brick-lined, cast-iron Chatham tower, originally built in 1877, was dismantled, hauled up the cape, and rebuilt atop a cement foundation 200 feet from the cliffs edge at Nauset Beach. The remaining Sister (minus its fourth-order Fresnel lens) was sold for $10 to Albert Hall, who incorporated it into his residence known as The Beacon. After its reconstruction, the former Chatham tower became known as Nauset Lighthouse or Nauset Beach Lighthouse, and the Barbier & Benard, fourth-order Fresnel lens was installed in its lantern room. The lens had three flash panels and produced a group of three flashes that was thought to honor the Three Sisters.

To provide accommodations for the keepers of the relocated cast-iron tower, the 1876 dwelling built for the Three Sisters was relocated farther away from the edge of the bluff. The cost of moving the dwelling, building a cellar, and installing the foundation for the relocated tower came to $3,680. The 1892 oil house from the Three Sisters continued to be used for the new lighthouse.

The top portion of the previously all white tower was painted red in 1940, to give it a distinctive daymark.

When Eugene L. Coleman arrived at Nauset Lighthouse as keeper in 1942 after having served more than a decade at Cape Neddick in Maine, he was greeted at the local combination post office/store with the words, Cap, I think youre going to like it here. We have a great climate here. Never gets cold for much of a time. Once in a while we get a below-zero temperature, but, I tell you, there are some beautiful days here in winter.

Well that winter, Coleman said, it was down to eight below. For two days you could look out this window at noon and you couldnt see those houses except at noon. Vapor was that thick. It was some cold that winter.

In 1946, the Colemans went for a period of time without a radio for entertainment, because they were unable to obtain replacement batteries, but Amanda Coleman was pleased to be with her husband at an onshore station where they could at least enjoy their neighbors. Manys the time, from Christmas to Mothers Day, that I havent seen another woman to talk to. The hardest part of lighthouse duty is being alone, having no one to talk to.

The Colemans did not have electricity, although it had been promised. The big icebox there, Amanda said, runs off kerosene. But its better here. We can go out. We had to learn to drive a car when we got here, wed never had one. Now we go shopping once a week in Orleans. It was harder in Maine. Three times we almost drowned.

Nauset Lighthouse was automated by the U.S. Coast Guard in 1955, and the keepers house was sold. In 1981, modern aerobeacons replaced the fourth-order Fresnel lens, which is currently displayed at Cape Cod National Seashore Visitor Center in Eastham. The light characteristic was changed at that time to alternating red and white flashes, which ties in nicely with the towers daymark.

By the 1980s, the strength of the surf and harsh storms had eaten away the nearby cliff, endangering Nauset Lighthouse. Through the efforts of the Nauset Light Preservation Society, the ninety-ton lighthouse and companion oil house were moved intact to safety 336 feet from the bluffs edge by International Chimney Corporation and Expert House Movers. The move, which took just two days and started on November 16, 1996, was much easier than the job of relocating the capes Highland Lighthouse, which the two companies had undertaken earlier that year.

At the time of its relocation, the tower stood a perilous twenty-five feet from falling off the cliff. Before the Society stepped in, the U.S. Coast Guard had no plans to save it, but they gladly leased the tower to the organization in 1995, so the move could be planned.

Through a combination of Federal grants and funds raised by the Nauset Light Preservation Society, on May 10, 1997, Nauset Light was relit as a private aid to navigation. (It had been decommissioned by the U.S. Coast Guard before the move.)

In 1998, Mary Daubenspeck agreed to donate the 1875 keepers dwelling to the National Park Service granted that she retain the right to use and occupy the house for another twenty-five years. In October of that year, the dwelling, which was just twenty-seven feet from the edge of the bluff, was moved across the road and reunited with the tower, keeping the same orientation and relative position to the lighthouse that it originally had.

Through the efforts of the Nauset Light Preservation Society, who maintain and operate the light, Nauset Light should remain safeat least for the 75 to 100 more years it is expected to take for erosion to threaten the light again.

For a larger map of Nauset Lighthouse, click the lighthouse in the above map.

Take Route 6 north on the cape to Eastham and Bracket Road, the third traffic signal from the Eastham/Orleans rotary. Turn right onto Bracket Road and continue until it ends at Nauset Road. Turn left onto Nauset Road and then take the first right onto Cable Road. At the end of Cable Road, turn left onto Ocean View Drive where there is a parking lot available. From the parking lot, follow the path to the lighthouse.

The tower is open for tours every Sunday, May through October, as well as Tuesdays and Wednesdays in July and August. As hours vary, check the Nauset Light Preservation Society website or call (508) 240-2612.

The fourth-order Fresnel lens is on display at the national seashore's Salt Pond Visitor Center in Eastham.