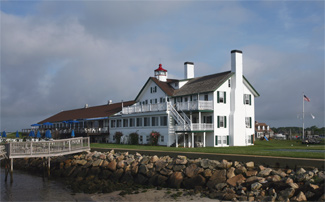 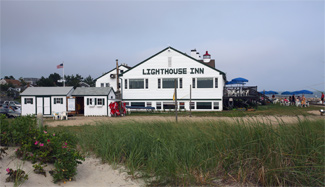 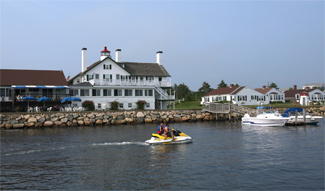 Some lighthouses decommissioned by the U.S. Coast Guard have been sold to private persons who restrict public access, but this is not the case for Bass River Lighthouse. Shortly after acquiring the lighthouse in 1938, the Stone family began welcoming guests. While it is a bit difficult to recognize the sprawling, sixty-eight-room Lighthouse Inn resort as the former Bass River Light, it is one of but a few lighthouses nationwide where the public can spend the night. The history of Bass River Lighthouse began with a lantern that Warren Crowell kept burning in the attic window of his Wrinkle Point home in West Dennis. Mariners crossing Nantucket Sound were so pleased with Crowells assistance that local sea captains voluntarily contributed twenty-five cents per month for fuel.

The town of Dennis, bounded by Cape Cod Bay on the north and Nantucket Sound on the south, consists of five villages all having Dennis and a modifier in their names. West Dennis has historically had many fishermen and residents employed in maritime trades, and as the number of fishing and whaling vessels in the area increased, the erection of a beacon on a breakwater at the mouth of the Bass River was proposed. Thinking they deserved something better, locals sent a petition to Congress appealing for a proper lighthouse instead of the beacon.

Congress agreed and appropriated $4,000, on September 28, 1850, but when a Revenue Marine officer arrived on site, he promptly declared the lighthouse was not needed and halted steps toward its construction.

By 1852, the newly formed Lighthouse Board sent its own inspector, who decided that a lighthouse was indeed required.

The officer of the revenue marine who was sent to examine and report upon this site condemned it as unnecessary. It was apparent, however, to the board, from the information received from various reliable sourcesamong which may be included that of the officer of the coast survey who was charged with examining this locality with reference to another objectthat a small light is required at or near Bass river breakwater. A small light is now kept up by private means at this point. Four thousand dollars is recommended as the necessary sum to plan an economical light and build a keepers house, at this point.

On March 3, 1853, Congress once again appropriated $4,000. A plot just east of Bass River was then purchased from George W. Richardson in 1854. A white, one-and-half-story, wooden keepers house with an iron lantern room atop the pitched roof was built using materials pulled by oxen across the neighboring salt marshes and sand dunes. James Chase was hired as the first keeper at an annual salary of $350, and he exhibited the light for the first time on April 30, 1855.

Keeper Chases granddaughter, Carrie May Sheridan, recalled that families and friends would wait on West Dennis beach for passengers arriving from ships that would anchor offshore. Horse-drawn carriages drove into the shallow waters edge, Carried remembered, to take them ashore.

The change in keepership from Captain Chase to Zelotes Wixon of Dennis in 1861 was not a pleasant one. Wixon wrote that when he arrived for training, [Chase] refused me all access to the light until the first day of August though I several times requested permission to look at it and examine the same in order to fit me for my position and the proper discharge of my duties. Wixon also complained that Chase seemed to be adulterating the lighthouses oil.

It is only appropriate that Warren Crowell, who kept the lantern lit in his attic window, later became keeper of Bass River Lighthouse. Although wounded and taken prisoner in Virginia during the Civil War, Crowell survived the conflict and returned to West Dennis, where he was appointed keeper in 1869.

In the book Cape Cod Remembrances, Marion Crowell Ryder painted the following fond portrait of the West Dennis area in the olden days:

The house stood tall and solid and foursquare, quite a distance back from the edge of the water. In those days the beach presented a busy sceneit was lined with fishing dories, moored or drawn up on the sand, and great piles of long, slender weir poles were stacked here and there  Atop the sand dunes straggled a uneven line of small, weather-beaten fish shanties where their owners could stow their gear and warm themselves about battered little stoves in inclement weather. When we went to the beach as children we never tired of wandering along the shore, watching the fishermen mending their nets, setting out their weirs, or bringing in a shining catch ... The lighthouse itself always dominated the beach with its purpose and significance.

Bass River Lighthouse was deactivated on August 1, 1880, after the establishment of Stage Harbor made the light unnecessary. With lighthouses at Stage Harbor, Bishop and Clerks, and Monomoy and two lightships offshore, mariners were believed to have enough lights to determine their vessels location. Bass River Lighthouse was sold at auction, and a newspaper reported that Keeper Crowell returned to his former residence where he is having a barn built.

The decision to deactivate the light was immediately questioned and, yielding to pressure, the government repurchased the lighthouse and relit it on July 1, 1881. An oil house was added to the station in 1905. Hyannis resident Captain Samuel Adams Peak served as keeper of the re-established light and looked after it until his passing in 1906.

Following Samuels death, Miron Peak assumed his fathers role as keeper for a short time until Russell Eastman was appointed keeper later that year. Marion Crowell Ryder described Eastman as taciturn and unceasingly busy keeping the lighthouse and its out-buildings in spotless condition. Her memories of Mrs. Eastman were pleasant and full of praise, [She] always had a warm welcome awaiting us in the house. It came to be that no trip to the beach was complete without a visit in her immaculate kitchen. She was a wonderful cook as innumerable doughnuts and cookies testified, but especially was she skilled in doing the most beautiful embroidery that I have ever seen. Literally, for her, there were long winter evenings when the wind raged and the foaming tide made an island of the lighthouse and she found solace in turning her mind toward creating a wealth of flowers and butterflies on table linens and dress lengths which had been ordered over the summer. Several of us wore dresses of her exquisite workmanship when we graduated from high school.

Bass River Light remained in service until 1914 when the Cape Cod Canal opened, redirecting boat traffic away from Nantucket Sound and towards Buzzard Bay. Keeper Eastman was transferred to Neds Point Lighthouse, where he had the honor of serving as the last keeper of that lighthouse as well. The Fresnel lens was removed from the decommissioned Bass River Lighthouse, and a skeleton tower with an automatic beacon was constructed across the river at South Yarmouth to replace it.

Harry K. Noyes, of the Noyes Buick Company in Boston, bought Bass River Lighthouse at auction, enlarged the main house, constructed additional buildings, landscaped the grounds, and used it for a summer house. In 1933, after Noyes passed away, the property was put on the market where it remained until 1938, when it was purchased by State Senator Everett Stone. Mr. Stone planned to develop and resell the property, but by the time the ownership papers came through in June, it was too late in the year for construction to begin. To pay the mortgage, Mrs. Stone began to take in lodgers. So many guests wished to return the next year that it led to the founding of the Lighthouse Inn. In 1939, an overnight stay for two, including three meals, cost five dollars.

After seventy-five years of darkness, Bass River Lighthouse was relit on August 7, 1989, the 200th anniversary of the U.S. Lighthouse Service. The privately maintained light, with a signature of a one-second flash every six seconds, has officially been designated West Dennis Light on the Coast Guards official Light List.

Although some years ago it was a motel chain that became famous for humorous ads featuring the quote, Well leave the light on for you, now it is the Lighthouse Inn that flashes its welcoming light each night for guests local mariners.

For a larger map of Bass River (West Dennis) Lighthouse, click the lighthouse in the above map.

From Route 28 in West Dennis just east of Bass River, turn south on School Street. Follow School Street for one-half mile and then turn right onto Lighthouse Road. Take Lighthouse Road for 0.2 miles and then turn left onto Lighthouse Inn Road. There are a few rooms upstairs in the original lighthouse in which you can stay, and if you mention you are into lighthouses, you can probably get a guided tour and be allowed access to the lantern room during your stay.

The lighthouse is now The Lighthouse Inn. Grounds open, lighthouse open to guests in season.