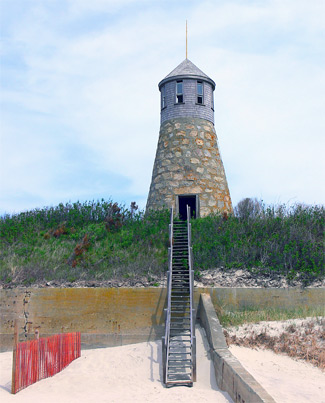 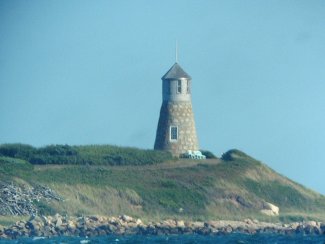 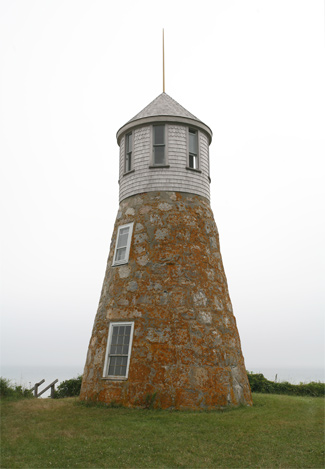 Point Gammon Lighthouse is located just east of the entrance to Hyannis Harbor on the southern tip of West Yarmouths Great Island, which is attached to Cape Cod by a narrow isthmus. The point is about two miles north of the treacherous Bishop and Clerks ledges and twelve miles northwest of Monomoy Lighthouse.

Point Gammon received its name from the old term to gammon meaning to deceive or fool, reflecting the dangerous currents, rocks, and weather conditions in the area that frequently tricked sailors, resulting in the loss of ships and lives.

Seeking to protect their investments as trade flourished in the Hyannis area, the citizens of Dennis, Yarmouth, and Barnstable appealed to Congress for a light. Built according to the same specifications as Race Point Lighthouse near Provincetown, Point Gammon Lighthouse was first lit on November 21, 1816 and exhibited a fixed light at a height of seventy feet above the sea.

Point Gammon Light was Cape Cods fourth lighthouse, and began and ended its service under the care of keepers from the local Peak family. Samuel Adams Peak was hired as its first keeper at an annual salary of $300. Samuels son John lived with him at the station from 1816 until Samuels death at age forty-one, in June 1824. At that point, John, who was eighteen years old at the time, took over his fathers position. In 1842, Keeper John Peaks salary was $350 a year.

The November 1, 1838 inspection report of Lieutenant Edward W. Carpender, U.S. Navy noted that the keepers dwelling, which like the tower was built of stone, was connected to the tower through a kitchen so the keeper could attend the lighthouse without being exposed to the weather. As with many light stations in the area, Carpender recommended reducing the lamps, from ten with thirteen-and-a-half-inch reflectors, arranged in two rows with six above and four below, to a single row of six, more compactly arranged.

Carpender recorded that the station had just undergone repairs and was in good order, but less than ten years later, Inspector I.W.P. Lewis did not find the structure quite so sound: Tower of rubble masonry, to which has been added a superstructure of brick, making the entire height 25 feet; masonry rough-cast outside, but in bad condition; roof soapstone, and leaky; walls leaky; wood work rotten; whole structure out of repair. Dwelling-house of rubble stone, rough-cast outside with gravel and cement; roof shingled; whole structure leaky; woodwork decayed, and requires thorough repairing.

Keeper John Peak provided Lewis with a statement describing the stations deficiencies in even more detail:

The light-house and dwelling-house here are both built of rough stone, and both very much out of repair. The walls of the tower leak throughout, though the outside has been rough-cast with cement; yet this was not well done, and affords no protection. All the wood work of the tower is rotten, viz: door frame and casing, window frames, stairs, and newel - so rotten that a knife can be thrust through any of them. The deck of the tower is loose, and works in stormy weather; consequently, it leaks also. The lantern has become very rickety, so much so as to break the glass by its motion, and keeps the lamps rattling, and breaks great numbers of the tube glasses. The reflectors were renewed about five years since, but the plate was thin, and now they are nearly worn out. My dwelling-house is extremely leaky, particularly on the east side, where the rain leaks in, so that we always have to move our beds during an easterly rain, and also to mop up bucketfuls of water; the roof leaks, and the shingles are rotten and nail-sick; the window frames and door sills are rotten, nothing but a mere shell remaining on the sills of the front windows. The cellar is wet and damp, and has no floor to it. About five years ago, an addition was made to the tower by carrying up some six feet of brick work, and replacing the lantern on that. The defective state of the building appears to me to arise from a want of faithfulness in the original work; repairs have been made from time to time, but to no useful purpose. I am allowed a boat, but there is not boat-house. The curb of the well is so rotten that we have difficulty in obtaining water.

Despite the trying conditions, Keeper John Peak and his wife, Martha, managed to raise nine children, including two sons, who would themselves become keepers. Historian Edward Rowe wrote that their daughter Imogene had to walk six miles to and from school each day. Imogene considered the hike to be beautiful in the spring, summer, and fall, but lonely in the winter.

In 1855, Peak recorded 4,969 schooners, 1,455 sloops, 216 brigs, and four steamboats passing the lighthouse. This amount of maritime traffic justified a new navigational to better mark the offshore obstruction known as Bishops and Clerks. Thus, for a short time beginning that year, a lightship was stationed offshore. Problems with ice soon rendered this solution impractical, and construction of a lighthouse soon began at Bishop and Clerks.

Noting that a lighthouse was being constructed on Bishop and Clerks Reef, the Lighthouse Board made the following recommendation in its 1857 report: It is respectfully submitted that the outlying light-house on Bishop and Clerks reef will meet fully all the requirements of navigation to render it easy and safe within the limits of these two lights, and that therefore to continue the exhibition of the Point Gammon light, after the exhibition of the one on Bishop and Clerks, will tend to embarrass and confuse navigators, while its exhibition could not, it is believed, be of the least use to them under the circumstances. Its discontinuance is therefore respectfully recommended.

Though its days were numbered, a fourth-order Fresnel lens replaced the array of lamps and reflectors used in the lantern room at Point Gammon in 1857. At this time the lighthouse was described as a white-washed stone tower with a black lantern room.

When Bishop and Clerks Lighthouse first shone on October 1, 1858, it marked the end of service for Point Gammon, but not for Keeper John Peak. He transferred over to become Bishop and Clerks first keeper.

When Point Gammon Light was abandoned, it began to deteriorate bit by bit, despite middling attempts to keep it in repair. In 1865, there was talk of its destruction. The structures standing at the discontinued light-house station at Point Gammon, being found to be in a rapid course of demolition from lawless persons, fishermen and others, it was deemed prudent to have them taken down and removed to a place of greater security. Some of the materials, lumber, &c., have been used in the erection of buildings needed at other light-stations. The government, however, ended up leaving the station mostly intact and selling it in a public sale in 1872.

Bostonian ornithologist Charles Barney Cory purchased 550-acre Great Island, where Point Gammon Lighthouse stands, in 1882 for use as a game preserve stocked with pheasants, elk, deer, antelopes, and other game. Non-game birds were protected, and the island became one of Americas first bird sanctuaries. At some point, Cory placed a tall structure atop the tower, whose lantern room had earlier been removed, to facilitate its use as a viewing station.

Following Corys financial ruin in the stock market, the island was sold in 1914 to Malcolm G. Chace, a Rhode Island banker with fond boyhood memories of visiting the island.

In 1935, the old one-and-a-half-story stone keepers house at Point Gammon was dismantled and the stones used to build a new house on Great Island. Then in the 1970s, Arnold Chace converted the old tower to a summer residence and spent several summers there, with the lantern room serving as his bedroom. The majority of Great Island remains privately owned by the Chace family, and public access is not allowed.

While mere rubble remains of Bishop and Clerks Lighthouse, which ceased operations in 1928 and was blown up in 1952, the stone tower on Point Gammon still stands picturesquely at the entrance to Hyannis Harbor. Point Gammon Lighthouse has thus lived up to its name and gammoned its replacement by outlasting it.

For a larger map of Point Gammon Lighthouse, click the lighthouse in the above map.

The area surrounding this lighthouse is private property and access is closely restricted. The lighthouse can be seen distantly from the beach near Hyannis Lighthouse, but the best views come from the water. We went blue water sailing aboard the Cat Boat from Hyannis, which afforded closer, but still distant views of the light. Bay Spirit Tours offers a lighthouse harbor tour that passes the lighthouse.


Though the 2009 movie "The Lightkeepers," focuses on life at Race Point Lighthouse, Point Gammon Lighthouse also appears in the film.