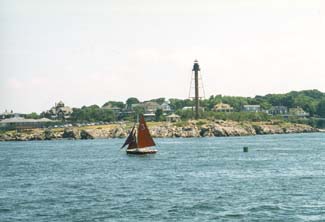 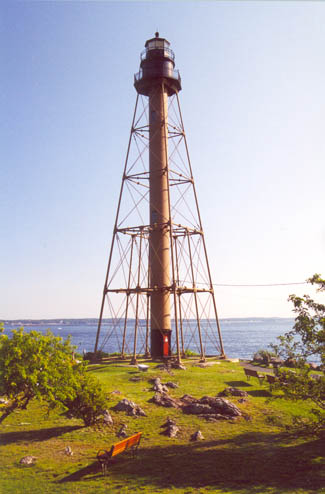 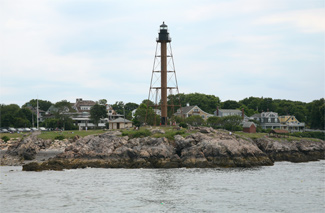 Folks seem to find Marbleheads brown skeleton tower with its spindly legs either charmingly unusual or downright ugly, but those who study the history of the lighthouse will discover its keepers are truly noteworthy. Blessed with a deep harbor protected from the Atlantic by a lengthy neck of land, the Town of Marblehead began as a fishing village but later developed significant foreign trade. In 1831, Eleazer Graves and other Marblehead residents petitioned for a lighthouse to be built on the point of Neck at the entrance to the harbour to protect the local economy. The exact location of the lighthouse spurred some debate, but after Congress approved $4,500 for a lighthouse on June 30, 1834, approximately four acres of land on the tip of the neck were purchased from Joseph W. Green and Ephraim Brown for $375.

Construction soon followed on a twenty-three-foot white tower attached to a keepers house by a covered walkway. The little house had two rooms and a kitchen on the first floor and two bed chambers on the upper floor. Inside its octagonal lantern, the original brick tower had ten lamps fueled by whale oil that produced a fixed white light fifty feet above mean high water. The light was first exhibited on October 10, 1835.

Ezekiel Darling, a Duxbury, Massachusetts native and former gunner on the USS Constitution, was appointed Marbleheads first keeper at an annual salary of $400. Although wounded in the War of 1812, Darling was refused a war pension on the grounds that he had been disfigured, but not disabled.

When engineer I.W.P. Lewis inspected the lighthouse in 1842, Darling provided a statement complaining about the stations leaky tower, sweating lantern, and damp dwelling. Lewis, who could be quite critical, complimented Darling in his report, writing, Perfect order, cleanliness, and apparent comfort reign throughout the whole establishment, much to the credit of the keeper. Besides taking good care of the station, Darling also made a few additions to the dwelling for his own convenience: I floored a part of the cellar, and made a kitchen of it; opened a passage to the cellar under the principal kitchen, and keep my coal there; made a chamber of the cockloft, and built a porch on the north door of the house.

The care and attention Darling invested in his position were only surpassed by his courage, as described in an 1857 article:

He is a man of small stature, but of a wiry and well-knit frame, showing that when in his prime he must have been capable of great endurance.  In the duty appertaining to this position he has often distinguished himself. He once rescued some shipwrecked mariners from the Devils Back, and in the spring of 1843 took charge of a dory with four gallant Marblehead men, put off in a tremendous sea, and brought ashore the officers and crew of the brig John Hancock, which was dashed to pieces on Tinkers Island in a violent easterly storm, when the snow drifted eight to ten feet deep. For this act he received a medal from the Humane Society. There are few men among us who can show a finer record of gallant deeds than Captain Darling.

In 1857, a sixth-order Fresnel lens replaced the oil lamps and reflectors. When in 1860, a nearly blind, almost seventy-year-old Darling was forced to retire following a quarter century of service, Jane Martin of Marblehead was appointed keeper. Jane had gained experience assisting her father, Ambrose Martin, at nearby Bakers Island Lighthouse. John Goodwin followed Martin in 1862, remaining ten years at the station.

Despite repeated repairs, under the tenure of Keeper James S. Bailey the keepers house required replacement at an estimated cost of $5,000. Bailey must have been pleased with the new, far larger, two-story, wood-frame house when his family occupied it in 1878.

A Boston Globe article from 1889 attributed the rescues of seventeen people near the light station to Keeper Bailey. Once Bailey saved six men as they clung to the rigging of their schooner during a winter gale, injuring himself in the process when his own boat was thrown by the violent waves. He managed to bring the men to the lighthouse, where he cared for them for several days. When Bailey requested that the affluent Philadelphian owners of the schooner reimburse him for the mens food, he was coldly informed that nobody had ordered him to feed them.

On another occasion, Bailey spied a boat in trouble in the harbor. By the time he launched his dory and rowed out to it, one of its occupants was already in the water. According to the Boston Globe, the mans bald pate was all that could be seen, when Bailey dove in and pulled the man to safety. This time Baileys courage earned him a medal from the Massachusetts Humane Society.

Bailey stated that he did not want and would not accept money for saving a life: It is a duty for me to save my fellow men, and as long as I am able to wield an oar and keep my eyesight, I shall never refrain from undertaking the trip over the waves that may be the means of saving life.

In the 1870s, large summer houses were built near the lighthouse blocking its light. On July 10, 1883, an auxiliary light was first exhibited from a 100-foot mast erected near the lighthouse, and not long thereafter a lighting conductor was installed to protect the mast.

Keeper Henry T. Drayton, a former lightship sailor, took over as keeper in 1892. Hoisting the lantern up the mast was probably not one of his favorite jobs, because just as it was raised into position the light would frequently go out. Drayton and his wife raised eight children at Marblehead Lighthouse during their thirty-five years at the station. One son, Lawrence, went on to become keeper at Plymouth Lighthouse.

During most of the Draytons time at the light, the road to Marblehead was only passable at low tide. When Mrs. Drayton felt another birth coming (five of her children were born at the lighthouse), she would tell the older children on their way to school to inform the doctor, who would make his way to the station by horse and buggy. Draytons daughter Mary remembered the Neck as a hub of activity in the summer, but isolated in the winter. There were only two neighbors in the winterthe nearest a half-mile away, and the next a half-mile after that. During the summers, of course, there were lots of people. But during the winter there were no other children.  We had no electricity, just kerosene lights.

Mary recalls that the keepers house was comfortable with running water and hot-water radiators in every room. There were four bedrooms and a bath upstairs and downstairs was the kitchen, dining room, and living room. The family tended a large garden and kept a cow, chickens, and pigs, but still, every month, Keeper Drayton would venture to Boston for other staples, including barrels of flour, sugar, and beans. Twice per year the supply boat would bring kerosene and other supplies for the light.

Lighthouse Board records in 1893 and 1894 noted the need for a new, taller tower.

Marblehead has a deep capacious harbor, which is nearly landlocked. For nearly sixty years a light has been maintained to guide vessels in and out of this harbor, especially the fishermen, who, from the very nature of their business, find it necessary to enter and leave the harbor at any and all time, at night as well as by day. Many merchant vessels loaded with coal and general merchandise ply between this and other ports along the shore, and scores of yachts, with hundreds of pleasure seekers, make this their headquarters during the summer. The harbor, when not properly lighted, is difficult of approach, especially from the south and west. Mariners, ship owners, and others have complained for some years that the many dwellings lately built obscure the light. The difficulty has been partly overcome by showing a light from a lantern hoisted on a mast; but this is only a make-shift. The safety of commerce absolutely requires that a higher tower be erected. It is now proposed, therefore, to build a brick tower about 100 feet high, on the site of the present tower, at an estimated cost of $45,000, and it is recommended that an appropriation of this amount be made therefore.

Instead of the proposed brick tower, a 100-foot-tall, pyramidal, iron skeleton tower, to be manufactured by Chamblin, Delaney, and Scott of Richmond, Virginia, was approved for Marblehead in 1895. This design, which had been used elsewhere in the country, was likely selected due to its cost of just $8,786 versus the $45,000 estimate for a brick tower. A temporary wooden tower exhibited a light at Marblehead while the iron tower was assembled on the site of the original lighthouse, which had been demolished to make way for its successor. The new tower, the only one of its kind in New England, first exhibited its light on April 17, 1896.

The core of the tower is an iron cylinder that houses a 127-step spiral staircase that leads to the landing below the lantern room, while eight cast-iron pilings, seated atop concrete foundation disks and connected by a network of braces, provide the necessary support. A covered way linked the new tower to the keepers dwelling. A brick oil house was added to the station in 1907.

During World War I, the stations boathouse was equipped with a telephone and converted into living quarters for military personnel, who kept watch over the nearby waters. The keeper enjoyed the convenience of a telephone after the soldiers left, but when electricity came to the lighthouse in 1922, that benefit was not extended to the keepers dwelling. The lights characteristic was changed to fixed-red in 1922 to differentiate it from the backdrop of the towns lights. In 1938, the lights color was changed to fixed green.

Once when Edwin C. Sparky Rogers (1930  1938) was keeper, a search was initiated for his missing son Edwin. The boy was eventually spotted high atop the tower perched on the ventilator ball, and Keeper Rogers had to climb up to retrieve his son. The event remained Edwins favorite childhood memory, but it is doubtful that his mother and father shared his enthusiasm for the episode.

Four months after Harry S. Marden became keeper in May 1938, the worst hurricane in New England history slammed into the coast. When the lighthouse lost its power, the quick-thinking Marden hurriedly drove his car up to the tower and connected his cars battery to the wiring. All night Keeper Marden remained in the tower, proud that he was able to keep his light shining despite the devastating storm. Marblehead Light did go dark during World War II and remained off-limits to the public from 1941-1946 while Marsden returned to active duty in the military.

Chandler Hovey donated the land surrounding the lighthouse to the Town of Marblehead in 1947 to create a park, which now carries his name. Joseph Barry, superintendent of the towns parks, and his wife were the last occupants of the keepers house, which was demolished in 1959.

Marblehead Lighthouse was automated in 1960, and its Fresnel lens was replaced by a modern optic. The Town of Marblehead now looks after the tower, while the Coast Guard monitors the light. Although periodic requests are made to paint the tower a prettier white, the tower remains its original metallic brown. In 2012, the Marblehead Rotary Club honored Carl Siegel, one of its members, for twenty years of organizing the stringing and maintenance of lights on the lighthouse every Christmas and Fourth of July.

For a larger map of Marblehead Lighthouse, click the lighthouse in the above map.

The lighthouse is owned by the Coast Guard, but licensed to the Town of Marblehead. Grounds open, tower closed.