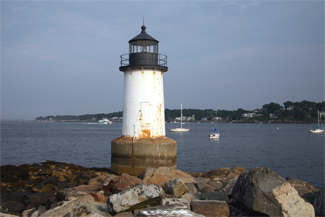 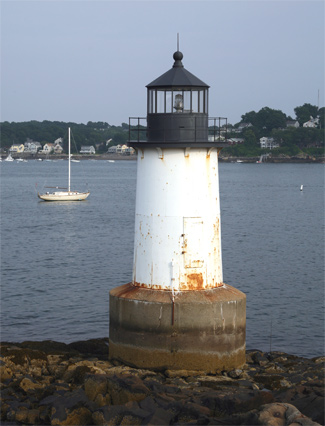 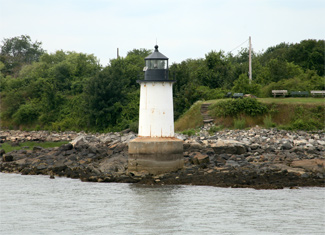 While some keepers regularly faced the trauma of shipwrecks, John Harris, keeper of Fort Pickering Lighthouse, could proudly state that during his thirty-seven years of service the light always shone no matter how harsh the weather and not a single ship was wrecked at Winter Island. Keeper Harris became keeper at Fort Pickering in December 1881 and was absent from the light for only five nights during his lengthy tenure. Sometimes he would travel the two miles to the city for supplies, but usually he stayed at home with his wife, Annie, and his son, Arthur, who lived at the lighthouse until he joined the army. Harris, an Ipswich native and Civil War veteran, was pleased with his six-room wooden home and the improvements he made. He proudly told The Boston Globe in 1919, When I went to the island, it was nothing but a lot of pasture land, but now there is a nice house there, and I have improved the place so that there are walks laid out and lawns planted, and it really is a very beautiful spot, especially in summer.

Keeper Harris had never ridden in a car, seen Salem after dark, nor watched a movie until after his retirement in 1919 at age seventy-five. It seems as though we have been out of the world for a long time, and it will take some time for us to learn how to act among people. He saw his first film on the night he left his post for good. Although he had seen a reenactment of the Battle of the Gettysburg years earlier, he said it couldnt beat the movies by a long shot.

After decades spent on secluded Winter Island, the Harrises moved to a busy Salem street corner in January 1919. I feel that I shall miss the quiet and freedom, Annie Harris mused. From the windows of our island home we had a wonderful view of both the inside and outside harbors and, with the broad expanse of ocean, it was an ideal spot for a home. The couple was absent from the island only seven months when Annie died, and John passed away the following April.

Not all keepers were as conscientious as John Harris. In a bid to generate additional income, another Fort Pickering keeper took a second job as superintendent at the nearby Plummer Home for Orphaned Boys. This move, however, backfired, as it was in violation of his lighthouse keeper contract and resulted in his termination.

Winter Islands strategic position at the entrance to Salems inner harbor was underscored when fortifications were built there by 1643. The fort was originally named Fort William for King William of England, but the name was changed to Fort Anne after Queen Anne assumed the throne. In 1799, after America had gained its independence, the fort was named Fort Pickering after Colonel Timothy Pickering, a Salem native who served as Secretary of State under President Washington. Remnants of the fort, rebuilt in the Civil War era, still stand near the lighthouse.

Salem Harbor, the second deepest harbor in Massachusetts, reached its peak as a maritime center between 1750 and 1810, when the siren song of Asias ports of call brought riches to savvy local merchants and traders. The harbors significance diminished after the War of 1812, but still remained important.

In 1869, $30,000 was allocated for the construction of three small lighthouses (Fort Pickering, Hospital Point in Beverly, and Derby Wharf) to enable vessels to safely enter the harbor at all times.

The cast-iron, brick-lined tower, which through much of its history was normally painted brown or red, was built just offshore and was attached to Winter Island by a wooden walkway, fifty-two-feet long, ten-feet wide, and seven-feet high. The light was moved from a temporary structure to this new tower where it first glowed through a fifth-order Fresnel lens on January 17, 1871. The flashing white light was situated a mere twenty-eight feet above sea level, making it one of the smallest of the conical cast-iron towers that would be popular from the 1870s into the early 1900s.

After passing Bakers Island, mariners would line up the lights at Fort Pickering and Derby Wharf to enter Salem Harbor.

The wooden walkway had to be rebuilt twice after being destroyed by ice in 1879 and 1904. The Harris family must have been pleased when in 1895 water pipes connected the keepers house with the Salem water system. By 1878, a sixth-order Fresnel lens was being used in the lantern room, and by 1920, an incandescent-oil-vapor light had been installed in the lantern room, but an oil lamp was kept on hand in case of a power outage.

In the 1930s, a Coast Guard air station was built on Winter Island, and many of its personnel lived in the keepers dwelling until new quarters were completed. During a blizzard in 1934, thirty guardsmen were trapped in the dwelling. The temperature was well below zero, and they were getting low on fuel oil when a snowplow finally broke through to rescue them. The keepers dwelling was later converted to the Coast Guard Officers Club on Winter Island.

Winter Island gained an unexpected claim to fame in the 1950s when it became the scene of a number of UFO sightings. One photo shows several lights purportedly flying in formation over the nearby power plant.

An offshore buoy replaced the lighthouse when the Coast Guard vacated the island in 1970, and the deserted tower soon began to deteriorate. The Blizzard of 1978 ripped the tower door from its hinges, causing it to fall into the harbor. In the early 1980s, the Fort Pickering Light Association was organized, and as part of their restoration efforts they fished the door from the harbor and replaced it on the tower. Following restoration, Fort Pickering Light was relit in 1983 as a private aid to navigation.

After the light was dark for a few months following the failure of its underwater power cable, the beacon was converted to solar power in April 1995. The light now flashes once every four seconds.

Although the keepers house, walkway, barn and other out-buildings no longer exist, frequent summer events, a campground, and a yearly blues festival draw many visitors to Winter Island and Fort Pickering Lighthouse.

For a larger map of Fort Pickering (Winter Island) Lighthouse, click the lighthouse in the above map.

From Highway 1A in Salem, 0.7 miles south of the bridge over the Porter River, turn east on Webb Street. When Webb Street ends, turn left onto Derby Street/Fort Avenue and continue to Winter Island Road. Turn right onto Winter Island Road and follow it to its end, where you will need to pay a fee to enter the park if you are not a local resident. After entering the park, stay left and the road will lead to the lighthouse.

The lighthouse is owned by the City of Salem. Grounds open, tower closed.