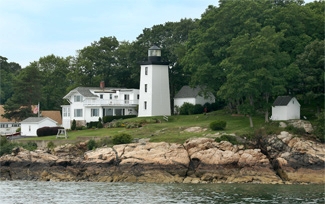 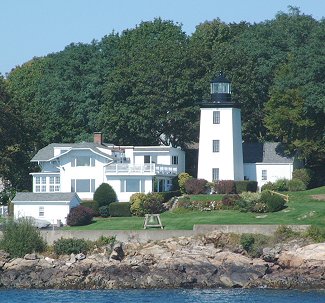 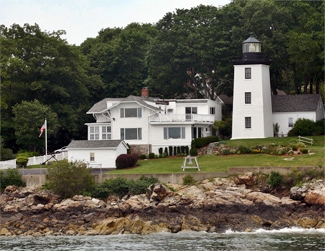 Although it was the ocean-going trade of Salem that led to the establishment of Hospital Point Lighthouse in the town of Beverly, both Beverly and its lighthouse have played admirable roles in American maritime history.

When the thirteen Colonies declared their independence, the Continental Navy had a mere thirty-one ships. This prompted the decision to issue Letters of Marque to commission and arm privately owned merchant ships, which became known as privateers. These merchant seamen, many based in Beverly, played a vital role in the birth of the new nation by intercepting British shipping in the Atlantic, Caribbean, and even between Ireland and England. In 1777, George Washingtons armies totaled 11,000 men, and there were an equal number of privateers. The Hannah, the first ship commissioned by the nascent navy, set out from Beverly on September 5, 1775, and for this reason, Beverly claims to be the birthplace of the U.S. Navy.

In 1869, the Lighthouse Board requested funds to complete the lighting of Salem Harbor. A pair of lights was established on Bakers Island, at the entrance to Salem Sound, in 1798, but additional lights were needed to help mariners safely reach protected anchorage available nearby. The three new lights recommended by the Lighthouse Board were a light at Hospital Point, which would help mariners enter Salem Sound, and lights at Fort Pickering and Derby Wharf to function as range lights to mark the channel leading into Salem Harbor.

On July 15, 1870, Congress appropriated $30,000 for the lights, and the town of Beverly transferred roughly two acres at Hospital Point to the federal government for use as a light station. The name Hospital Point came from a small pox hospital built there in 1801. The hospital, which had served as a barracks in the War of 1812, burned down in 1849.

A light on the rocky promontory of Hospital Point, west of Beverly Cove, first shone from a temporary structure on May 1, 1871. The temporary light was moved to its permanent home in 1872 inside a ten-sided black lantern room, mounted atop a forty-five-foot-tall square, brick tower. A lovely two-story Queen Anne Revival home was built nearby for the keeper. An author described the station in an 1897 book as follows:

White with the dazzling white which only whitewash can give, and beside which all other whites are gray, the square prim lighthouse tower enhances and deepens the blue of sky and bay. The keepers home is a chalet-like cottage, from whose walls slope the grassy banks, pretty with flowers, down to the rocky shore.

Although the dwelling remains standing, its architectural purity has been so compromised by additions and alterations over the years that the National Register of Historic Places only lists the light tower. A brick oil house built in 1902 is also found on the premises along with a garage added in 1942.

Hospital Point Light is also distinguished by a unique condensing panel mounted on one side of the lens. If a mariner deviates outside his course in the main channel, the light diminishes in intensity and prompts a course correction.

It is oft said locally, Many a Beverly maids heart was lost and found on the rocks beneath the faithful light. But whether this was because Hospital Point was a local lovers lane or because women waved goodbye and waited there for their men to return home from sea is unclear.

From 1909  1912, a spacious home on the shore at Woodbury Point, between Beverly Cove and Hospital Point, became the summer retreat for President William Howard Taft. Tafts twelve-year-old son, Charley, was drawn to Hospital Point Light for a visit, but according to an August 24, 1909 article in the Boston Daily, the boy may have suffered from acrophobia: He climbed the lighthouse in order to look out on to the water and when he reached the top he complained of being sick. The little fellow was assisted to the ground floorand he felt much better.

Levi B. Clark served as keeper of Hospital Point Lighthouse from 1917 to 1926, and over a stretch of at least five years, he had the distinction of receiving the efficiency flag, which was awarded to the light station in each district attaining the highest general efficiency during the fiscal year. All keepers who attained a high level of efficiency during the year were entitled to wear the inspectors efficiency star for the succeeding year, but having the privilege of flying the efficiency flag, which was the regulation Lighthouse Service flag, was special privilege.

On May 1, 1927, Hospital Point Light was officially renamed Hospital Point Range Front Light, as a beacon was cobbled together, using equipment from a lightship, and placed in the steeple of Beverlys First Baptist Church to serve as a rear range light for entering Salem and Beverly Harbors. Located about a mile away from Hospital Point, the rear light shines through a steeple window, 127 feet above mean high water. The electric beacon in the spire originally had two lamps, one being a spare, and a switching relay would place the spare lamp in operation if the main lamp failed. An astronomical clock, capable of determining the times of sunset and sunrise throughout the year at Beverly, was wound each day at sunset by an auxiliary motor and was responsible for turning the steeple light on and off.

The church steeple was the tallest structure in Beverly at the time and was used by mariners for as a day range before it was equipped for night use as well. Through the courtesy of church authorities and under authorization of city officials, a light had been shown from the steeple for many years before the government assumed responsibility for the beacon in 1927.

Keeper Arthur Small transferred to Hospital Point in 1939 from Palmer Island, after surviving the Great New England Hurricane of 1938, which claimed his wife, Mabel. While serving at Hospital Point, Small was also responsible for the lights at Derby Wharf and Fort Pickering.

Hospital Point Front Range Light was automated in 1947, and since that time the dwelling has housed the commander of the First Coast Guard District.

Although a devastating fire swept through Beverlys First Baptist Church in 1975, the rear light remained active as the spire was one of the few parts of the building that remained standing. U.S. coastguardsman Don Decker recalls that servicing the light in the church steeple was his least favorite duty as nesting pigeons made the cramped space very unpleasant.

For a time, the former helicopter pilot, Rear Admiral Vivien S. Crea lived at the station until she left in 2004 to become the first woman commander of the Coast Guard Atlantic Area and commander of the Maritime Defense Zone Atlantic.

An agreement was signed with the Coast Guard in 2009, giving permission to members of the Coast Guard Auxiliary to open the lighthouse to visitors more frequently than the annual open house held during Beverly Homecoming. Volunteers began to search through records held by the Beverly Historical Society for information on the lighthouse to share with visitors during the tours and located the logs, maintained by the stations first and second keepers, that record weather observations and important events. The public is fortunate to have the increased opportunity to visit such a historical and well-maintained station.

For a larger map of Hospital Point Range Front Lighthouse, click the lighthouse in the above map.

The lighthouse is home to the commander of the First Coast Guard District and is only open to the public as part of the week-long Beverly Homecoming and Essex National Heritage Area's Trails and Sails.

The lighthouse is owned by the Coast Guard. Dwelling closed. Grounds and tower open once each year.