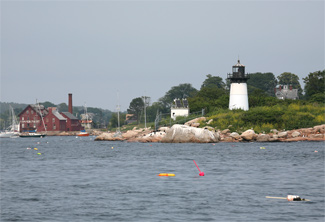 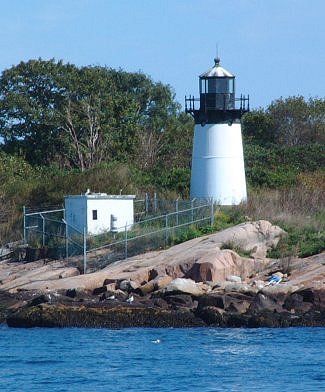 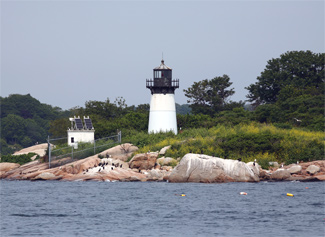 Amos Story, a local mariner from Gloucester, is best known for having served as keeper of Ten Pound Island Lighthouse from 1833 to 1847 and for being one of many reliable witnesses that reported a sea serpent near the island in 1817. The earliest recorded sightings of sea serpents in the frigid Gloucester waters date back to 1633. Some supposed the creatures were lured by the teaming cod and other cold-water fish that thrived there.

Early reports of a strange creature were met with skepticism and ridicule. However, in August 1817, there were so many credible witnesses that the stories began to carry more weight. On August 6, two women who told of the creature were disbelieved, and a coasting ships captain was laughed out of Lipples auction room after relating his sighting of a sixty-foot serpent. On August 10, Amos Story reported a strange marine animalat the southward and eastward of Ten Pound Island, and the keepers account is preserved in a sworn statement:

It was between the hours of twelve and one oclock when I first saw him and he continued in sight for an hour and a half. I was setting on the shore, and was about twenty rods [330 feet] from him when he was nearest to me. His head appeared shaped much like that of the sea turtle, and he carried his head from ten to twelve inches above the surface of the water. His head at that distance appeared larger than the head of any dog I ever saw. From the back of his head to the next part of him that was visible, I should judge to be three or four feet. He moved very rapidly through the water. I should say a mile in two, or, at most, in three minutes. I saw no bunches on his back. On this day, I did not see more than ten or twelve feet of his body.

In a separate sighting, Storys wife, a woman held in high esteem for her veracity noted through a telescope what at first she believed to be a log that had washed ashore, until it moved, that is. Throughout the month, more and more witnesses told similar stories of a sleek brown serpent-like creature in Gloucester Harbor.

The recorded history of Ten Pound Island dates to the early 1600s, not long before the first reported sightings, when the island featured prominently on Samuel de Champlains map of Gloucester Harbor. Ten Pound Island either received its name from the amount of money paid to the local Native Americans for it or for the number of sheep pensknown as poundsthat the island could hold.

On May 15, 1820, Congress allocated $9,000 to erect two lighthouses, one on Ten Pound Island, at the entrance to Gloucesters inner harbor, and the other on Bakers Island, near Salem, Massachusetts. James Sayward was the first keeper of Ten Pound Island Light, and he was followed in 1833 by Amos Story, who was paid $350 annually. I.W.P. Lewis report in 1842 detailed the grim conditions endured by Story using the keepers own words.

The tower and dwelling are both built of rough-split stone, with a wall around the same. Both buildings leak, in consequence of bad work and defective mortar. Where the mortar pointing has cracked off, a stream of dry sand runs out from between the joints. The floor of the dwelling-house has rotted away, so that I have been obliged to nail battens over the openings. The lantern leaks and sweats. There were formerly ten lamps, but four have been discontinued; and I have placed a screen on one side of the lantern, to prevent the light being seen until vessels are off the mouth of the harbor. Formerly, it was seen over the land by vessels running in from the eastward, and was therefore liable to be mistaken for some other light. The leaks around the windows of the dwelling-house are so bad that we are obliged to set a tub to catch the water whenever it rains hard. The wood work, frames, &c, of the windows, are rotten.

In 1849, George W. Davis, a former sailor who developed deafness at sea, took over the role of keeper. A report the following year noted the station was as clean as it possibly can be, and that the backs of the reflectors and the tops of the fountains, which are brass, shine like polished gold. The report concluded: This present keeper has been brought up on the ocean, and keeps his ship in fine order, and everything in its proper place.

A sixth-order Fresnel lens replaced the array of lamps and reflectors in the lantern room atop Ten Pound Island Lighthouse in 1856.

The beauty of Ten Pound Island and Gloucester Harbor lured the famed American painter Winslow Homer to the island in 1880. During the summer he spent there with Keeper Octavius Merrill, Homer painted about fifty views of the harbor.

The following year, in 1881, a new wooden keepers dwelling and a thirty-foot conical cast-iron tower, which was lined with brick, were constructed. On March 1, 1889, the characteristic of the light was changed from fixed white to fixed white varied by a white flash every five seconds. An oil house was added to the station in 1906.

In 1881, Keeper Merrill was leading his cow home by a small rope that was attached to his thumb, when the cow took off on a run. Unable to restrain the cow or disengage the cord, Merrill was dragged across the ground for some distance before the rope broke. Besides having his thumb pulled from its socket, the keeper was also severely bruised on his shoulder.

The last keeper employed by the Lighthouse Service to serve at Ten Pound Island was Edward H. Hopkins, who transferred to the station in 1922 from Cape Poge Lighthouse. During the Christmas season of 1940, Hopkins wife Evelyn wanted to do something special for Edward Snow, the Flying Santa who dropped Christmas presents from a plane for lighthouse keepers children. She spread newspapers on the ground and nailed them in place, spelling out a MERRY CHRISTMAS that could be read from the sky. Snow was so impressed that a picture was taken from the plane and sent to the Associated Press. Later that afternoon, Edward, Jr., the Hopkins teenage son who attended school in Gloucester, purchased a Boston paper and rowed back to Ten Pound Island. When Edward, Jr. put the paper down on the kitchen table, Keeper Hopkins and his wife were shocked to see that a picture of their island home and its Christmas greeting taken just hours before was on the front page.

Bruce Keene, who would later become a keeper at West Quoddy Head Lighthouse in Maine, recalls living on Ten Pound Island in 1951, when his father, Thomas L. Keene, was the keeper there. Bruce was fourteen at the time and recalls having to row to the mainland to attend school. I loved it, even when it was rough.

The station on Ten Pound Island was decommissioned in 1956, and the fifth-order Fresnel lens was replaced by a modern optic, mounted first on the old fog bell tower and then on a modern skeleton tower. The Fresnel lens used on the island is now on display at the Maine Lighthouse Museum in Rockland, Maine. The decaying keepers dwelling was razed in 1965.

In the late 1980s, renovation of the lighthouse was performed under the leadership of The Lighthouse Preservation Society. The money for the restoration consisted of funds raised by the society, a donation by The Bank of New England, a Massachusetts Historical Commission grant, and a federal grant. In announcing the federal grant, Senator Edward M. Kennedy remarked, It [Ten Pound Island Lighthouse] has seen the stately schooners and the historic vessels that make their way to sea every day for over a century and watched over the Gloucester fishermen who braved the wind and waves to make their living. For some of those brave souls this vista of Ten Pound Island was their final vision of land. Ten Pound Island Lighthouse was relit on August 7, 1989, the bicentennial of the transfer of the countrys lighthouses to federal control. The oil house on the island was restored in 1995.

For a larger map of Ten Pound Island Lighthouse, click the lighthouse in the above map.

The lighthouse is clearly visible from many points along the Gloucester waterfront. To get a better view, you can take the Lighthouse Cruise offered by Harbor Tours Inc. of Cape Ann, or any of the many whale watching cruises offered out of Gloucester.

The lighthouse is owned by the City of Gloucester. Grounds open, tower closed.


A fishing vessel that served as the Andrea Gale for the filming of "The Perfect Storm" was tied up at the wharf in Gloucester during one of our trips to the area. The movie shows two lighthouses near Gloucester: Ten Pound Island and Eastern Point.