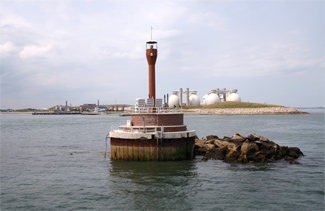 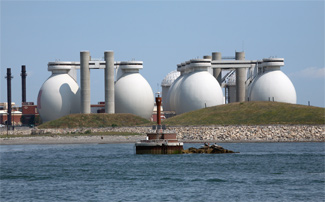 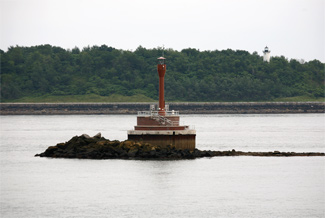 Much of the early history of Deer Island, named for the deer that swam there to escape wolves on the mainland, is a bit grim. Native American Indians, including many Praying Indians who had converted to Christianity, were exiled there without provision of food or shelter during King Philips War (1676-1677), and, not surprisingly, a great number of them perished. Later, Deer Island became a place of quarantine for immigrants, many of whom died while being treated at a hospital there. An almshouse opened on the island in 1853, and a few decades later that structure was converted into a prison. Deer Island Prison closed down in 1991, and since 1995 the islands primary occupant has been a wastewater treatment plant, whose egg-shaped digesters are now a familiar Boston Harbor landmark. In 1832, the Boston Marine Society petitioned Congress for $3,000 to erect a stone beacon on the extreme southern point of Deer Island, which was covered at high tide. Known as Deer Island Point Beacon, the resulting square, granite pyramid was painted red and served to mark the northern side of the Broad Sound Channels.

The Lighthouse Boards annual report for 1884 and 1885 included a request for $35,000 for a lighthouse to replace Deer Island Point Beacon. The steamers plying between Boston and the northern ports make use of the Broad Sound channels, and a light and fog-signal at this point are particularly desirable, because of the narrow and devious passages, the Lighthouse Board noted. In response, Congress appropriated $35,000 on August 4, 1886. After the lighthouse had been designed and put out for bid, it became apparent that more funds would be required, and Congress allocated an additional $6,000 on October 2, 1888.

Title to the site for the lighthouse on the spit that makes out from the southern end of Deer Island was secured from the City of Boston, and test borings made to the depth of six to eleven feet revealed that the seabed was composed of sand and gravel, mixed with a little clay. Lighthouse Board records from 1890 provide details on the then recently established Deer Island Lighthouse: The lighthouse, consisting of a cylinder iron caisson, 33 feet in diameter and 30 feet high, founded upon a shoal 6 feet below mean low water, filled with concrete and surmounted by an iron tower 37 feet high from base to focal plane, was finished on December 31, 1889. The light is of the fifth order, fixed white varied by a red flash every 28 seconds, lasting two seconds, and illuminates 237 ½ degrees of the horizon.

Atop the concrete in the bottom portion of the caisson were placed cisterns, which held water collected from the veranda that encircled the first level of the tower and which were accessed via an iron plate in the floor of the towers basement. An iron circular staircase made in Detroit led up through the three-floor keepers residence to a circular watch room and then on to the octagonal lantern. The lantern room was painted black, while the rest of the tower was brown.

Deer Island Lighthouse was initially assigned a keeper and assistant to perform the stations duties, which included keeping the lens revolving and the fog bell sounding by winding up their weight-driven mechanisms. The 1,200-pound fog bell on the lower gallery was struck every ten seconds when necessary. The first keeper was John Farley, with Michael J. Curran serving as the assistant.

The history of Deer Island Light contains some pleasant and humorous moments, such as the time during Prohibition when an unannounced visit by the lighthouse inspector literally had the assistant keeper running in circles. The keeper and assistant had been illegally producing malt liquor at the light. During the inspection, the assistant keeper was on the gallery with a five-gallon crock of moonshine, nervously circling the lighthouse, trying to stay out of sight on the opposite side of the tower until he fell over a cable attached to the lightning rod, smashing the jug. The panicked assistant was caught and fired on the spot.

And then there was Deer Island Lights most famous resident, The Climbing Cat (owned by Keeper Tom Small, who arrived as keeper in 1931). The cat was renowned for being able to climb up ladders and navigate the tricky levels of the tower. She would descend to the lowest level of the light, patiently observe the water, then spring, plunging underwater, and surface with a fish wiggling in her mouth. The feline would then paddle back to the tower and climb up the ladder to dine in solitary pleasure.

For its human occupants, Deer Island Lighthouse could be a lonely and dangerous place, particularly in foul weather. Keepers have reported that the lighthouse would shake with each wave that slammed into the tower during a storm. The caisson base of the lighthouse was patched with concrete and reinforced with a band around the tower in about 1902. After sever ice conditions during the winter of 1936 cracked the towers cast-iron caisson, the cylindrical foundation was reinforced by encircling it with interlocking steel sheet piling and filling the intervening space with riprap capped by cement.

After the Coast Guard took over the light, Officer in Charge John Baxter played a trick on a new crewmember. Knowing the surf was rising and soon the light would be shaking, he said, 'I want to warn you. We have ghosts out here. Soon the coffee cup on the table began to dance as if in proof. It took a long time to convince the young man that the ghosts really didnt exist.

But the weather made conditions at Deer Island Light more frightening than funny. In 1891, a window in the pier had to be replaced after it was stove in by the sea. And during a storm on December 27, 1930, fearing the tower would be flooded, Keeper Merrill King poked cotton into all the cracks in the walls. In November 1898, a powerful storm known now as the Portland Gale struck Boston, sinking forty ships in the harbor and blowing about 100 ashore. Keeper Wesley Pingree reported that the storm smashed the windows in his kitchen, allowing sea water to flood in and spoil the drinking water in the cistern. The mountainous waves also swept about the stations dory and landing ladder.

After Joseph McCabe took his post as assistant keeper in June 1908, he found life solitary and bleak. In March 1913, the Boston Globe reported that hed purchased a piano and had it delivered to the lighthouse to break the monotony of the lonely life in the isolated tower. When he wasnt on duty at the light, McCabe sought the company of people in East Boston, where he rented a room and met Gertrude Walter. The couple became betrothed and set their wedding date for Easter Sunday of 1916.

On Saturday, February 19, 1916, Keeper Joseph McCabe left the light to help his fiancée address their wedding invitations. When time came to return to the lighthouse, he found that a gale had begun to blow and the temperature had dropped below freezing. With his dory frozen to the beach, he borrowed some rubber boots and began the trek along the bar back to the light station, trailed by Wesley Pingree and Pingrees son Philip. Tragedy struck when McCabe attempted to hop onto a big rock and slipped, falling into the turbulent waters. Philip Pingree desperately tried to help McCabe, but the keeper was swept to sea, and his body was never found. McCabe was only twenty-eight at the time of his death.

With Deer Island Lighthouse situated in busy Boston Harbor, the lights keepers were in a prime location to offer assistance to mariners in distress. In August 1895, the steamer John Endicott ran into and sank a sloop yacht with three people aboard. The sloop yacht was trying to cross in front of the steam, but was caught in a swift eddy that impeded its progress. The steamer Philadelphia managed to rescue one person from the yacht, but the other two owed their lives to the keeper of Deer Island Lighthouse, who quickly put off in the stations dory.

In 1914, Assistant Keeper Elno C. Mott sprang into action after noticing a burning boat near the lighthouse. Mott took the motorboat in tow, beached it, and then revived the two men who were aboard. If that werent enough, Keeper Mott then helped the men to the lighthouse where he furnished them food, dry clothing, and lodging for the night.

Deer Islands final civilian keeper was Fred Bohm. For one-and-a-half years during World War II, he cared for the light and had the added duty of patrolling the nearby waters for German submarines lurking below. Also during the war, a boat carrying four coastguardsmen capsized, leaving the men clinging for two hours to submarine netting deployed near the lighthouse while praying for their rescue.

The harrowing hours before Deer Island Lighthouse was abandoned on February 19, 1972, were recounted by Coast Guard Keeper, Pedro Marticio:

At the time the press was calling it the worst noreaster in 40 years. We had lost all power at 1000 and flooded out the engine room, when a wave broke in the plate glass windows and frames and washed down into the engine room. There were three of us on board during the storm. The CGC [Coast Guard Cutter] Pendant was dispatched to shoot us a line and pass us a pump.

When BMC John Butler, Officer in Charge of the Pendant, saw the tower starting to tip he informed Boston, and in turn they told me to abandon station. The Pendant rammed its bow into the tower and my crew and I jumped on board. When he backed into deep water he got broadsided by a wave that almost capsized the 65-foot tug. The storm was knocking three-story houses off their foundations on Winthrop Shore Drive.

Costs to repair and renovate the station were estimated at up to $400,000. With the light being ineligible for the National Register, the decision was made to tear it down. Much to the amazement of nearby residents, demolition began on June 14, 1982, and three weeks later the job was completed. A $100,000 white fiberglass tower (built in England to withstand 110 mph winds and believed to be the first of its type in the U.S.) was erected on the lights base.

Complaints ensued that visibility of the white hourglass-shaped tower was poor, and a brown fiberglass tower took its place in 1984. The white tower was slated to replace Great Point Lighthouse, which fell during a storm in March of that year, but a reinforced concrete tower was built there instead.

When Deer Island Lights former Coast Guard Keeper John Baxter took a Boston Harbor Cruise to see his old workplace, he was in for a big surprise. Baxter said: I got my video camera, you know, and I said, What is that #^@* ? Whered it go? I was discouraged to see that thing out there. But Ive got to admit it was in bad shape. The platform on the outside was all rusted. We filled it with cement to patch it up. But I hate to see it go. You arent alone, John. You arent alone.

In November 2015, the fiberglass tower was removed from the foundation of the 1890 lighthouse, having been replaced by a square, skeletal tower mounted atop a nearby pile-supported platform.

For a larger map of Deer Island Lighthouse, click the lighthouse in the above map.

This lighthouse is best seen from the water. We passed by the lighthouse on a tour with Boston Harbor Cruises. Deer Island, which is home to the nations second largest waste water treatment plant, is part of Boston Harbor Islands park. The island has been attached to the mainland since Shirley Gut was filled in by the Great Hurricane of 1938 and public access is permitted. The offshore Deer Island Lighthouse can be seen from the islands public walkway.